'Operation Chastise' is more famously known as "The Dams Raid" and is arguably one of the most famous single operations of WW2.  Audacious in concept and execution, high risk, technically almost abstract and demanding the highest levels of airmanship and flying skill, the crews were handpicked for a very obvious reason.

Nineteen Australians flew on the raid in various capacities.  See the list below.

An artist's rendition of Lancaster 'AJ-G' overflying the Mohne Dam moments after its upkeep bomb detonated against the dam wall.

The raid entailed nineteen specially modified Lancaster Mk III (designated B Mk111 Special) bombers with their mid-upper turrets and a lot of internal armour removed and their fuselages modified to carry the purpose-designed 'Upkeep' bouncing bomb - more correctly described as a depth charge or mine.

Taking off from their base at RAF Scampton they were to fly at very low level to their targets in three waves.  The first of nine aircraft in three echelons of three aircraft each, the second of five aircraft and the third also of five, as a flying reserve.

A 617 Squadron Lancaster releasing an 'Upkeep' mine during testing

'Upkeep' was designed to attack and breach three key dams in the Ruhr valley supplying energy and water to the Nazi war machine.  Destruction of power generation, water supply and industrial capacity was the objective. Anticipated flood damage would be a second order bonus.

Much of the RAF top brass – including Head of Bomber Command, Sir Arthur Harris – were critical of the bouncing bomb concept as impractical and high risk. But Chief of Air Staff, Chief Marshal Charles Portal was convinced by tests of the bomb in Dorset, and overruled their objections.

'Upkeep' was carried in an external frame with a drive that imparted a reverse rotation so that when dropped at the correct height (60 feet above the surface) established by convergent spotlights under the aircraft, the bomb would skip across the surface of the dam, avoiding torpedo nets suspended in defence across the lake.  It would then hit the dam wall and sink to a depth of 30 feet, when hydrostatic pistols would detonate the bomb.  The resulting hydaulic pressure effect would in theory rupture the dam wall. 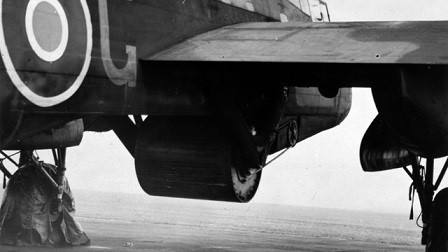 An 'Upkeep' mine loaded aboard WCDR Guy Gibson's Lancaster, AJ-'G for George'.  Note the chain drive to impart reverse rotation on the bombing run

The conception of the raid owed much to Professor Barnes Wallis, the inventor of the 'Upkeep' bomb and the principles it embodied.  He had played a key role in the design of the ubiquitous Vickers Wellington bomber with its unique geodetic construction.  He later went on to design the two 'earthquake' bombs, the 12,000lb 'Tallboy" and the ten ton "Grand Slam", with which 617 Squadron was to attack and destroy a range of high value targets from viaducts to 'V' Weapon sites and the German battleship 'Tirpitz' through the remainder of the War.

Eight aircraft failed to return, five of which were lost on the way to the target, and a total of 53 aircrew were killed.  Three aircrew were captured as PoW.  One of the aircraft lost at very low level, killed all of the crew when it crashed, but the Top Secret 'Upkeep' bomb broke away as the aircraft impacted and was recovered intact by the Germans. 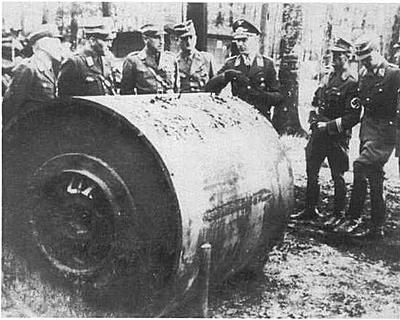 German personnel examine the Upkeep bomb recovered from the wreckage of a crashed Lancaster. 'Upkeep' was never used again.

A staggering testament to the high rate of attrition among Bomber Command crews was that of the 80 aircrew who survived the raid, 22 were killed in subsequent 617 Squadron operations including the CO's entire crew in September 1943 (Gibson was detached from the unit at the time) and another 10 with other units. Gibson himself was one among these 10 being killed in September 1944.

The effect?  The resulting floods sent a 30-foot wall of water into the Ruhr region, killing 1,600 and destroying power stations, factories, roads and rail lines. The Mohne and Eder dams were breached but only three Lancasters were able to make bombing runs against the earthen Sorpe dam, a more difficult target to access and breach; it was damaged, but not destroyed. 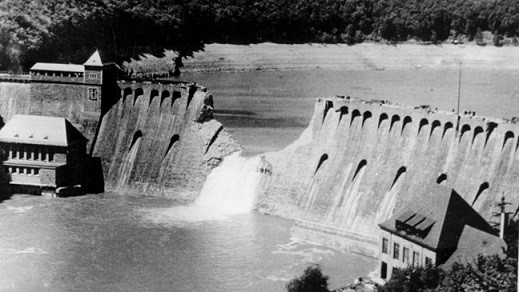 The raid's impact was relatively short-term – in spite of the success of the raid, the dams were repaired and power restored by the end of June.

Revisionist commentators have questioned the actual effect of the raid almost from the outset.  Others have reviewed it in a different light - see the attached story.

Frankly, in this author's opinion, debates about actual / marginal impact on industrial capacity etc matter less than the morale effect for the Allies in general and the RAF and Britain in particular at the time. Morale is a key combat multiplier whichever way analysts choose to do the numbers and in that dimension alone this raid was a triumph of conception, planning, training and execution. 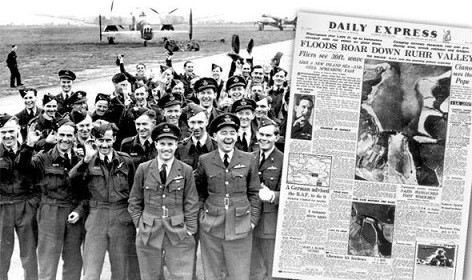 It attracted world wide attention at the time, when the tide of war had yet to turn in favour of the Allies.  671 Squadron's continuing contribution to the war effort was incontrovertible, albeit costly in terms of the lives of the aircrew that flew with it.

Australians on the raid (a work in progress)

407729 Flying Officer  (Later Squadron Leader) David Shannon, DSO* DFC* (pilot) of Bridgewater SA in AJ-L ED-929 was the youngest pilot on the raid, a few weeks short of his 21st birthday.  He subsequently became the most highly decorated RAAF airman flying at the time.  He survived the war with more than 80 missions to his credit.  He remained in Britain after the war taking up a career as an executive with the Shell Oil company.  He died in London in 1993.

Flying Officer Micky Martin, (pilot) (VWM entry pending) in AJ-P ED-90, known more formally as Air Marshal Sir Harold Brownlow Martin KCB, DSO DFC,  originally from Sydney, was a member of the RAF and the squadron's low flying specialist in the lead up to the raid. He survived the war and continued a career in the RAF raising to the rank of Air Marshal in 1970, knighted and awarded a DSO, DFC and bar during the War.  He retired fom the RAF in 1974, and worked until 1985 as a consultant with Hawker Siddley Aviation.  He died in the UK in 1988.