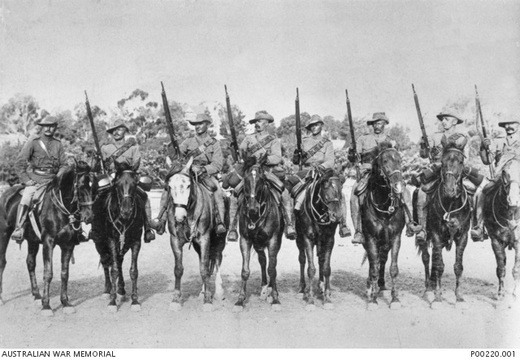 South Australia was still a colony, and Australia not yet a nation, when the Boer War broke out in South Africa in 1899.  The colonies of Australia each provided contingents.  When the war was over the colonial contingents had been merged, reflecting Australia's emergence as a nation.  Its soldiers had already begun the process of forging a reputation for courage, initiative, and endurance, which would later be reinforced during the Great War.

South Australia, like the other colonies, quickly raised a force for service alongside "The Mother Country" in dealing with a revolt among the Boer farmers of the South African veldt.  The Boer 'burghers' proved to be very effective irregular soldiers.  Mounted on their nimble Boer ponies they were well armed, resourceful and had the attributes and bushcraft skills to make them a formidable and respected enemy, inflicting heavy casualties in early engagements against regular British infantry.  They employed hit-and-run tactics and well-selected (and -defended) positions, to which the British initially had no answer.  However, as it turned out, Australian colonial horsemen proved to be every bit the equal of the Boers.  In fact they probably had more in common with their enemy than they did with their British allies.  Skilled bushmen, excellent shots and horsemen, the colonial mounted troops quickly adapted to, and excelled at, this mobile warfare.

There is a view that the ANZAC tradition was forged on the veldt of South Africa during the 1899-1902 Boer War when Australian and New Zealand units fought side by side.  Many historians think that, because this was a war before Australia became a Federation and the connection was not official unlike the situation in the First World War, it should not be considered part of the ANZAC tradition.  It is true that the war began in the last years of pre-federation. However, the last contingents were raised after Federation was declared and were known as the 'Australian Commonwealth Horse' (ACH) and its members wore the title AC.

A brief history of South Australia's contingent participation is as follows:

After Federation, South Australian contingents along with the newly titled Australian Army Medical Corps sailed to South Africa during the months of March to June 1902 and comprised the following:

Discrepancies as to the actual numbers of personnel from South Australia exist with respect to numbers detailed on memorials, for example:

The plaque on the building at the Torrens Parade Ground Adelaide that was unveiled in 1936 indicates 84 Officers and 1450 Men (1534 personnel).

South Australian participation in the Boer War is infamously associated with Lieutenant Harry "The Breaker" Morant (/explore/people/50). He is believed to be the third Horseman from the left in the title photograph.

Adapted by Steve Larkins from original work by Will Clough as featured in "Tributes of Honour".