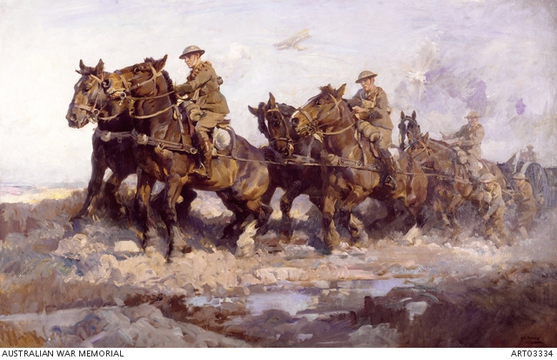 Main Image:  "Bringing Up the Guns" H. Septimus Power. Power depicts a team of six horses, a rider on one of each pair, struggling through the mud pulling the gun carriage with an 18 pounder gun. Two soldiers on foot are also pulling the heavy carriage. From the 1st Australian Imperial Force, 101st Australian Battery, they are taking part in the Third Battle of Ypres in Passchendaele, Belgium. The image conveys the difficulties the Australian and British artillerymen faced during the opening phase of the Ypres offensive in July 1917. The battlefield had become so churned by the unceasing bombardments from fight succeeding fight, that moving the guns forward after each advance took superhuman efforts.

This is a generic entry  - All WW1 Artillery units and formations are addressed under discrete entries.  This entry has been created as a landing page for men listed in the Emabarkation Rolls as reinforcements without a specific unit.  The best way to investigate the service of men thus listed is by directly consulting their individual service records to determine the units to which they were eventually posted.