The Australian Merchant Navy during the Great War 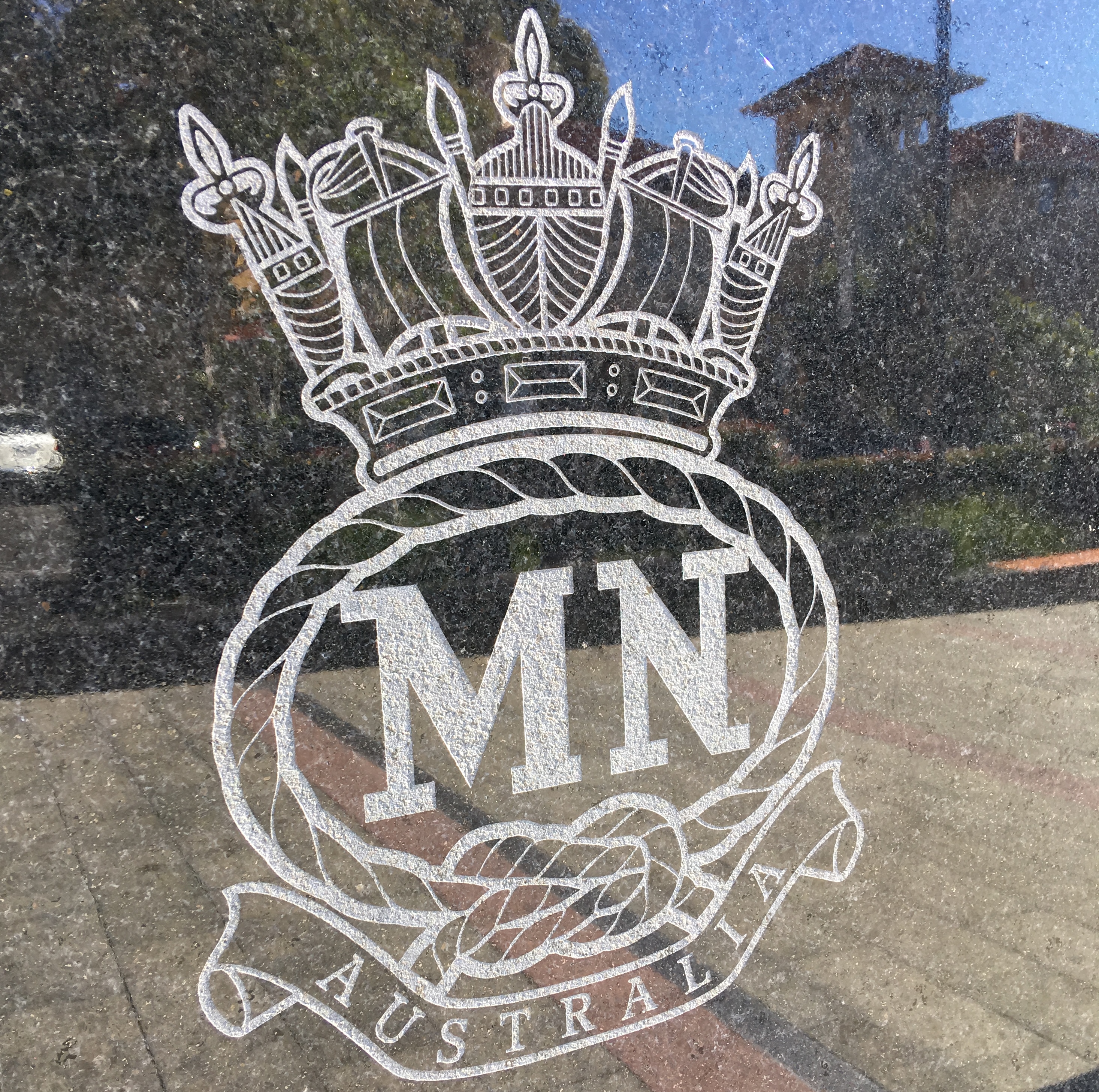 The award-winning ANZAC Centenary Memorial Walk in Adelaide has five badges etched into its black granite wall. Most people who walk past can easily identify the badges of the three services and, eventually, fathom the tri-service badge that leads the five. For many however, the coil of rope surrounding the initials MN remains a mystery and I can no longer count the number of times I have walked past a couple or group trying to puzzle this one out. That this is a mystery to most, is consistent with the contention that the role of the Merchant Navy in Australia’s military history is often neglected, particularly in the Great War.

Although popular perceptions of the Great War often focus more intently on the exploits of the infantry, the years of World War One also proved eventful for merchant mariners. Crews, like that aboard the S.S. Cycle, formerly Boveric, an Australian cargo steamer built on the River Clyde in 1898, had to contend with zeppelin raids (August 1916), submarine attacks (January 1917, May 1918), and being rammed (February 1917) before colliding with the flagship of the convoy in June 1918. Despite this, the Cycle survived World War One and returned to civilian service with a new owner and a new name, Svarten, until being broken up at Gothenburg in 1933.3 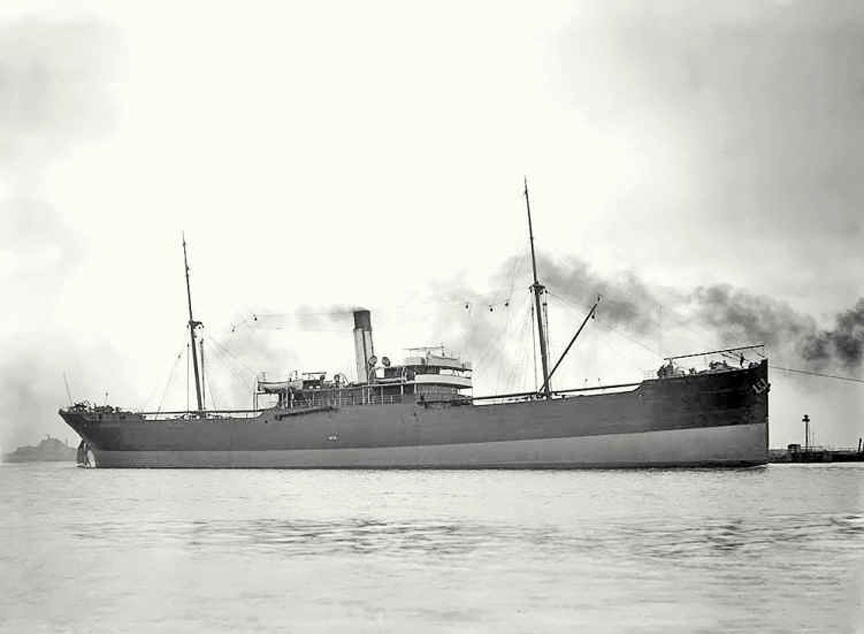 The Svarten, formerly Cycle (I)4

Other Australian merchant ships were not so fortunate, and 1918 proved to be a particularly bad year. Three of the four Australian merchant vessels destroyed in the conflict were sunk in the last year of the war. Two cargo ships, the Echunga from Port Adelaide and the Era from Melbourne and two transports, the Kyarra from Fremantle and the Warilda from Port Adelaide were all torpedoed and sunk. Of the four, the Era was the only one that had not already been attacked multiple times during the course of service. Although this article focuses on the merchant mariners, it is important to note that the sinking of merchant vessels had disastrous consequences. The Warilda, for example, was functioning as a hospital ship at the time of her sinking in August 1918. In addition to the 16 lives lost when lifeboats overturned, the engine room staff and 102 occupants of ‘I’ ward did not survive the torpedo attack.5

The fate of Australian Merchant Vessels during WWI.6

Thirty-five merchant mariners are listed on the Australian War Memorial’s commemorative roll as killed in action when the Echunga, Era, Kyarra and Warilda were lost. The majority of these men hailed from the British Isles, and five Southampton lads went down together with the Warilda. However, seven of those killed were Australians, from Western Australia, New South Wales, Victoria and Queensland.7 A further four individuals who can be identified as Australians died while in service with the Australian Merchant Navy during World War One; the 39 Australian deaths being part of 15,614 merchant mariners of the Commonwealth mercantile services who died during the Great War.8 This was a sad prologue of things to come. The merchant ships drafted into service during the Second World War were as much a target, if not more so, in the effort to disrupt supply lines. This resulted in the deaths of 320 Australians serving with the Australian Merchant Navy from a total of 36, 833 merchant mariners of the Commonwealth.

Among the greatest challenges to developing a better understanding of the Australian mercantile service during the Great War is the paucity and the disparate nature of the sources. Although the official ship logs are held by the National Archives of Australia, lack of digitisation poses problems to access. The merchant marines who died while serving in the war are documented by the Commonwealth War Graves Commission, sometimes with further information about next of kin and place of origin. Even less information is stored with these names on the Australian War Memorial’s Commemorative Roll. The Australian War Memorial’s repository of resources related to the service of the merchant navy during war time is limited, although it does contain a collection of cuttings, ship lists and an interview with the captain of the Warilda.9 As a result, there is significant scope for family collections and histories to make a difference of our understanding of the nature and experience of mercantile service during the Great War.10

[1] Jose, Arthur W. (1941),The Royal Australian Navy, Official History of Australia in the War of 1914-1918, vol. IX (9th edition), Angus and Robertson Ltd.: Sydney, p. 478.
[2] In 1916, Prime Minister William “Billy” Hughes had purchased the fifteen British steamers to clear the wheat harvests that had been delayed due to lack of carrying capacity of Australia’s cargo fleet. Jose, "The Australian Royal Navy," p. 478.
[3] “Boveric,” The Clyde Built Ships: The history of shipbuilding on the River Clyde, accessed 22/06/2017, http://www.clydeships.co.uk/view.php?year_built=&builder=&ref=19728&vessel=BOVERIC#v
[4] Ibid.
[5] Jose, The Royal Australian Navy, pp. 495-498. It is interesting to note that there is no ennumeration of merchant mariner casualties amidst numbers of wounded and medical personnel who died in the attack on the Warilda.
[6] Data compiled from Jose, The Royal Australian Navy, pp. 479-539.
*H2 Moorina was torpedoed and sunk but was on loan to the Government of India at the time.
†This refers to ships that were not subject to enemy action during World War One. C16 Canowie, for example, did not emerge from the war unscathed, having been wrecked off the coast of Chile on 9 October 1916. Other ships listed here as unscathed were involved in collisions, or wrecked after the end of hostilities.
[7] Australian War Memorial "Commemorative Roll", accessed 22/06/2017, https://oldsite.awm.gov.au/people/roll-search/commemorative_roll/; Commonwealth War Graves Commission, "Find War Dead," accessed 22/06/2017, http://www.cwgc.org/find-war-dead.aspx.
[8] Commonwealth War Graves Commission.
[9] Australian War Memorial, AWM 38 3DRL 606/265/1 – 1916-1918, accessed 22/06/2017, https://www.awm.gov.au/collection/C1378124.
[10] The Australian National Maritime Museum has links to some great resources for those interested in researching merchant mariners in their family at http://www.anmm.gov.au/learn/library-and-research/research-guides/seafaring-ancestors.