Formed in Williamtown, New South Wales on 23 May 1941, No. 455 Squadron was an Article XV squadron under the EATS – fated for service overseas. 445 Squadron joined RAF Bomber Command, the first Australian squadron to do so, and began operations out of Swinderby on 6 June 1941.[i] The squadron was equipped with Handley Page Hampden medium bombers, which they used to mount their maiden bomb raid over Frankfurt on the night of 29 August 1941. In doing so, 455 Squadron became the first Australian squadron to bomb Germany.[ii] 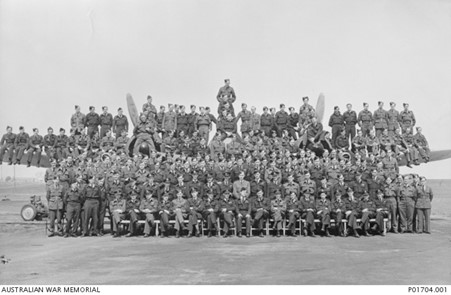 A group photo of all the members of No. 455 Squadron, taken in Dallachy, Scotland in October 1944. The squadron is assembled in front of a Bristol Beaufighter
AWM P01704.001