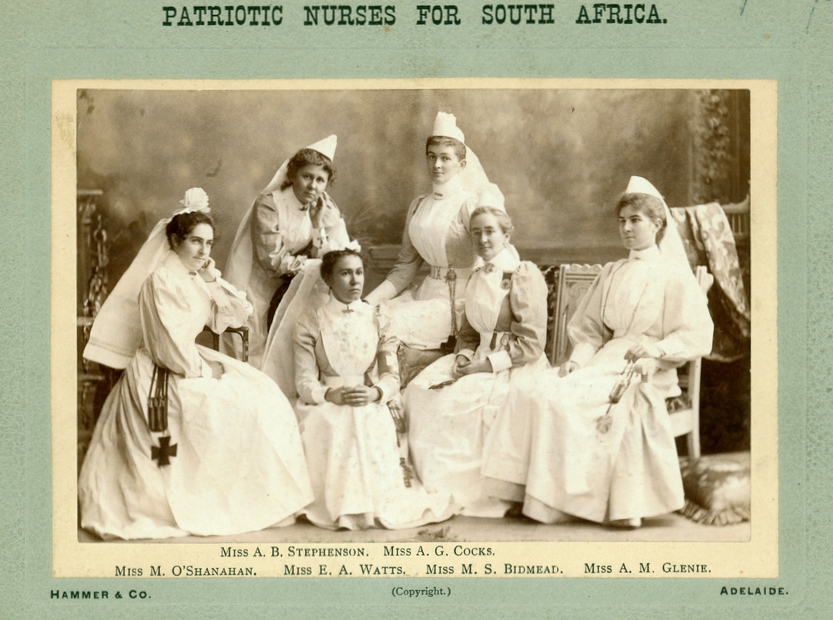 Although in the history of the Second Anglo-Boer War they receive less attention than those of the fighting contingents, the stories of the South Australian nurses who plied their trade in the conflict are no less interesting. Martha Sarah Bidmead, who had trained at the Adelaide Children’s Hospital, was working as a Staff Nurse at Burra Burra District Hospital when the Second Anglo-Boer War broke out. Bidmead volunteered and was placed in charge of the contingent of six South Australian nurses that the colony’s government had decided to contribute.1 In addition to Martha Bidmead, the contingent consisted of Amelia Bramley Stephenson, Mary A. O’Shanahan, Agnes Maude Glenie, Eliza Ann Watts and Agnes G. Cocks. The nurses set sail on 21 February 1900 with their fares paid and a guarantee of 15 shillings per week.

Military nursing was in its infancy in 1899. By October 1899, New South Wales was the only colony that had developed an Army Nursing Service Reserve and that had only been in operation a few months before.2 All women wishing to enlist in New South Wales were required to have at least three years of experience in a general hospital. The nurses from the South Australian Contingent were certainly experienced in civilian nursing, having variously received training at the Children’s Hospital, North Adelaide (later Calvary) Hospital, and the Adelaide Hospital (later the Royal Adelaide Hospital) and some years of experience in practice in both public and private institutions.3 South Australians raised the money to send the nurses after a growing public voice questioned the lack of a medical unit accompanying the Second South Australian Contingent.4 The British army medical service took responsibility for and command of the nurses, who nevertheless were expected to make regular reports to the South Australian Chief Secretary.5 Jan Bassett argues the drive towards professionalization and the opportunity for greater experience that service in conflict offered the nurses were key inducements for volunteering in the Boer War.6 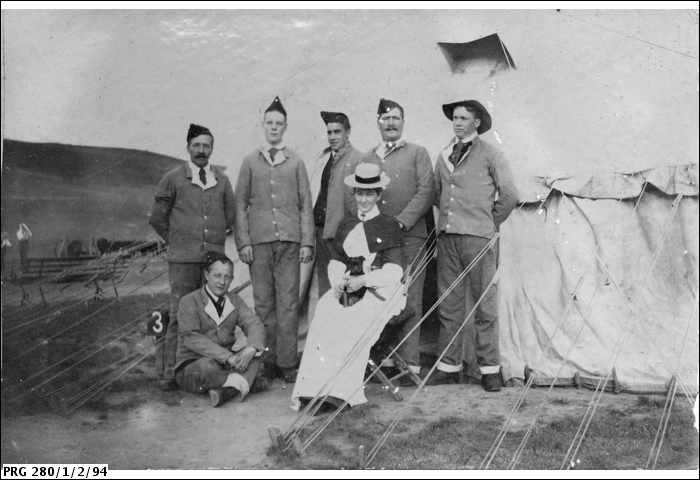 Service in South Africa would certainly broaden their experience, as the afternoon teas and concerts that entertained the nurses on the voyage from Albany to Cape Town, soon gave way to more sober concerns.7 Nurses in South Africa faced a number of challenges. As with many conflicts of the late nineteenth and early twentieth centuries, epidemic diseases such as typhoid and dysentery posed a considerable clinical challenge and, in the Boer War, claimed over seventy percent of the lives lost.8 Reporting from Wynburg in April 1900, Mary O’Shanahan described the danger of typhoid, also known as enteric fever; “patients get the fever here in a very severe form, and numbers of them are dying with it. The doctors' say they have never seen such deep ulceration.”9

The challenges were not merely clinical. There was considerable tension between the civilian colonial nurses and the nurses of the British Army Nursing Service, the latter of whom were perceived by the former to be “mere lay figures or figureheads”. Martha Bidmead caustically remarked that the British military nurses “do nothing but take temperatures, give stimulants, and sometimes wash a patient’s hands and face if his temperature is very high.” As a result, the military nurses did “not look with exactly loving eyes on the civilian sisters, who are accustomed to and expect work.”11 The South Australian nurses also found little welcome among their South African colleagues. While nurses shipped in from Britain and her other colonies were being readily deployed by the British army medical service, local nurses in Cape Town were struggling to find work and were said to be “nearly starving”; certainly Martha Bidmead could find no evidence of them being employed at either of the military hospitals in Cape Town.12

The end of Australian involvement in the Second Anglo-Boer War by no means signalled the end of the nurses’ commitment to their profession. Martha Bidmead, who was the first South Australian nurse to be awarded the Royal Red Cross and was also mentioned in Despatches and awarded the Devoted Service Cross, returned to private nursing in South Australia. She later became the superintendent of the District Trained Nursing Society (later the Royal District Nursing Service). Agnes Cocks chose to remain in South Africa, nursing at the Johannesburg Hospital. She later travelled to England, where she was nursing when war was again declared in 1914. She served with the British Medical Corps in France, returning to South Australia to live with her widowed mother after the war. In her obituary the Adelaide Chronicle wrote that “the strain of war work told considerably upon her once robust constitution.” Agnes Cocks died of pneumonia on 28 June 1925 following severe burns she suffered in a domestic accident.13

On her return from South Africa, Maud Glenie was awarded the Devoted Service Cross and later married Hugh Bonython, becoming the daughter-in-law of Sir Langdon Bonython. She died suddenly as a result of a stroke at the age of 46 in 1915.14 Like Agnes Cocks, Eliza Watts went on to serve in the Great War, joining the Australian Army Nursing Corps as Staff Nurse in 1914 and serving in Egypt, France and England. On her return to Western Australia at the cessation of hostilities, she continued nursing, becoming the matron of Dwellingup District Memorial Hospital. She died in Perth in 1941 at the age of 66.15 Little is known of Mary O’Shanahan, who received a Devoted Service Cross, or of Amelia Stephenson beyond their contributions to South Australians’ understanding of the experience of nursing in the war through the local press.

It was not just the individual nurses who benefited from the experience that the Second Anglo-Boer War provided. Bassett contends that the war can be seen as a catalyst for the development of military nursing organisations.16 The Australian version, named the Australian Army Nursing Service despite being a reserve, was established in 1902 and 1903. Each military district was to have a “lady superintendent”, a matron, and a share of ninety-six nursing sisters; the Fourth Military District, including South Australia and Broken Hill, was to provide fourteen nurses. The new recruits would soon be able to add wartime nursing to their practical experiences as they, along with old hands like Eliza Watts, would be drawn into a conflict that would be in greater need of their skill than ever before.