The Origins of Remembrance Day

The Origins of Remembrance Day

Today, November 11 2019, marks 100 years since the first organised Armistice Day, a year after the end of the First World War.

Every year on the 11th of November at 11 am, the people of the Commonwealth, fall silent for one or two minutes to remember those who were killed in war. Similar traditions occur in other Allied countries such as France and the United States and in recent times observance of the date has also spread to include those from the defeated Central Powers such as Germany.

Remembrance Day grew out of what was originally known as Armistice Day to mark the signing of the armistice that ended the First World War. At 5am on the 11th of November 1918, three German government representatives accepted the Armistice terms presented to them by an allied commander, General Foch of the French Army. The armistice became effective at 11am the same day, and as the guns fell silent on the Western Front in France and Belgium, four years of hostilities ended. That day, throughout the Allied world, there were wild scenes of celebration as the news spread.

In 1919, as the 1st anniversary of the end of the war approached, thought began to turn to the idea of observing a period of silence. This was first proposed by Melbourne journalist Edward George Honey, who suggested a period of silence for national remembrance in a letter published in the London Evening News on 8 May 1919:

“Five little minutes only. Five silent minutes of national remembrance. A very sacred intercession. Communion with the Glorious Dead who won us peace, and from the communion new strength, hope and faith in the morrow. Church services, too, if you will, but in the street, the home, the theatre, anywhere, indeed, where Englishmen and their women chance to be, surely in this five minutes of bitter-sweet silence there will be service enough.” i

Although the idea did not take hold immediately, a South African statesman, Sir Percy Fitzpatrick, suggested the same concept and it was put before King George the Fifth. Edward Honey then attended a private rehearsal with the Grenadier Guards at Buckingham Palace where it was decided five minutes was too long. After reconsidering the proposal, King George delivered his now famous message, asking:

“… at the hour when the Armistice came into force, the 11th hour of the 11th day of the 11th month, there may be for the brief space of two minutes a complete suspension of all our normal activities… so that in perfect stillness, the thoughts of everyone may be concentrated on reverent remembrance…” ii

On the 1st Armistice Day, events were held all over the British Empire according to the King’s instructions. In London, the 1st two minutes silence was held on the grounds of Buckingham Palace, with the King also hosting a banquet in honour of The President of the French Republic. In Australia, events were held in cities and towns across the country as people gathered to remember the fallen. 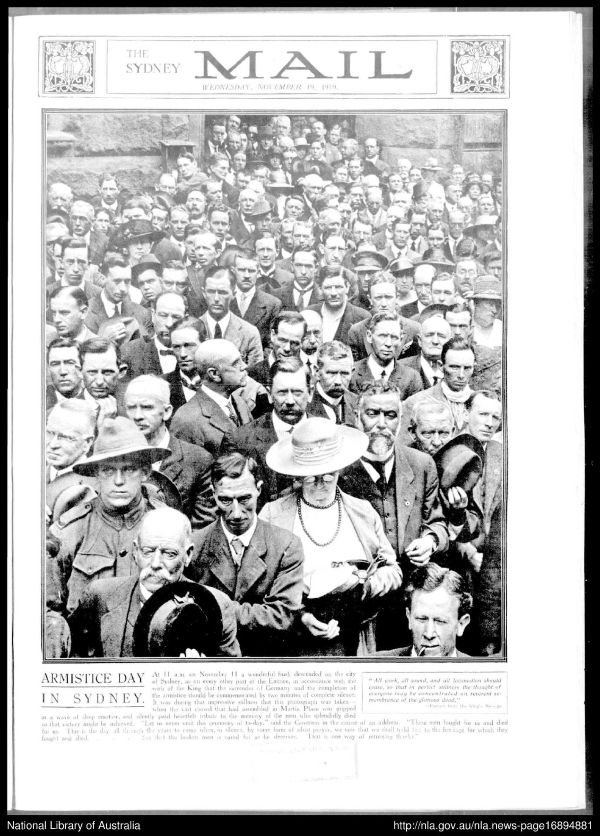 At the second Armistice Day on November 11 1920, a newly constructed Cenotaph was unveiled at Whitehall in central London to replace an earlier temporary monument on the same site that became the centerpiece of commemorations. Soon other cenotaphs and similar war memorials were constructed in the towns and cities across the Commonwealth to serve a similar function. These monuments have held host to Remembrance Day commemorations ever since. 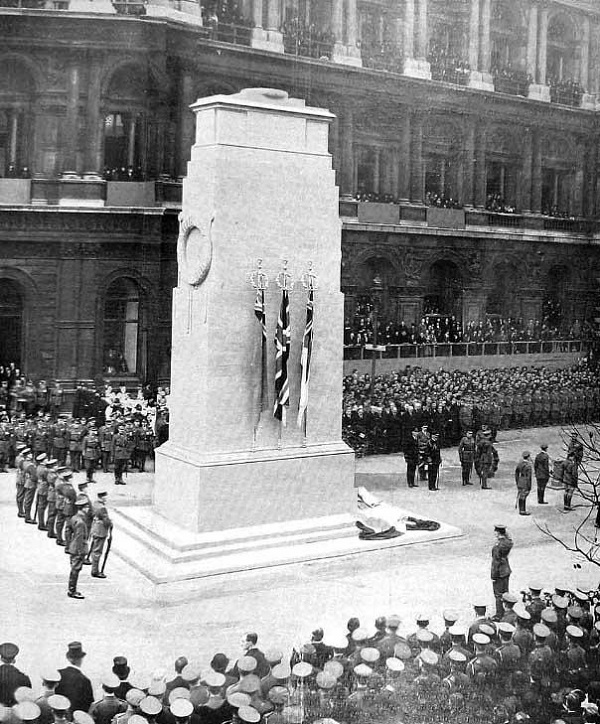 Another important tradition that has built up around Armistice Day is that of the poppy. The wearing of the poppy was inspired by Canadian physician Lieutenant-Colonel John McCrae’s 1915 poem “In Flanders Fields”:

In Flanders fields the poppies blow
Between the crosses, row on row,
That mark our place; and in the sky
The larks, still bravely singing, fly
Scarce heard amid the guns below.

We are the Dead. Short days ago
We lived, felt dawn, saw sunset glow,
Loved and were loved, and now we lie
In Flanders fields.

Take up our quarrel with the foe:
To you from failing hands we throw
The torch; be yours to hold it high.
If ye break faith with us who die
We shall not sleep, though poppies grow
In Flanders fields. iii

In 1921, Frenchwoman Madame Anna E. Guérin travelled around the allied nations advocating for what she called an “Inter-Allied Poppy Day”. In Britain, she convinced Field Marshall Haig of the idea and because the British equivalent of the RSL, the British Legion, lacked funds, she paid for poppies to be constructed herself. On November 11 1921, members of the British Legion sold and wore poppies at remembrance ceremonies and soon the tradition spread to the rest of the Commonwealth, where it is still going strong. 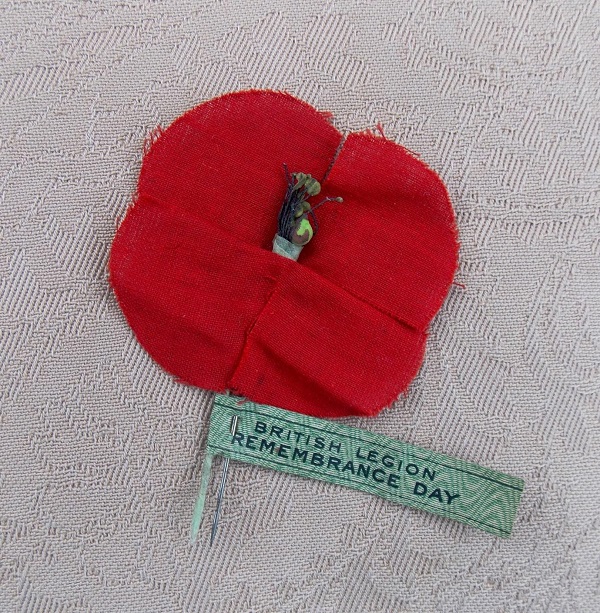 The Last Post ceremony is another noticeable part of Remembrance Day in the Commonwealth of Nations. Originally a bugle call to be used in war time to signal that the final sentry post had been inspected, and the camp was secure for the night, since the middle of the 19th century it has been incorporated into military funerals and other military commemoration services. In these contexts, the Last Post is often followed by the Rouse, originally used to wake soldiers up in the morning.

The use of the Last Post in Remembrance Day ceremonies has two generally unexpressed purposes: the first is an implied summoning of the spirits of the Fallen, the second is to symbolically end the day, so that the period of silence before the Rouse is blown becomes in effect a ritualised night vigil.

During the Second World War, a decision was made to rename the observance to “Remembrance Day” in recognition of the fact that the Armistice was unfortunately not final and that the dead of the new war should be remembered as well.

Today, 101 years after the end of the Great War, the 11th of November is still solemnly commemorated throughout the nations of the First World War allied powers and beyond, either under the name “Remembrance Day” in the Commonwealth, “Veterans Day” in the United States or “Le Jour du Souvenir” in France. As there have been further wars since 1918, the focus of remembrance has expanded to encompass the dead of all wars.

They shall grow not old, as we that are left grow old:
Age shall not weary them, nor the years condemn.
At the going down of the sun and in the morning
We will remember them. 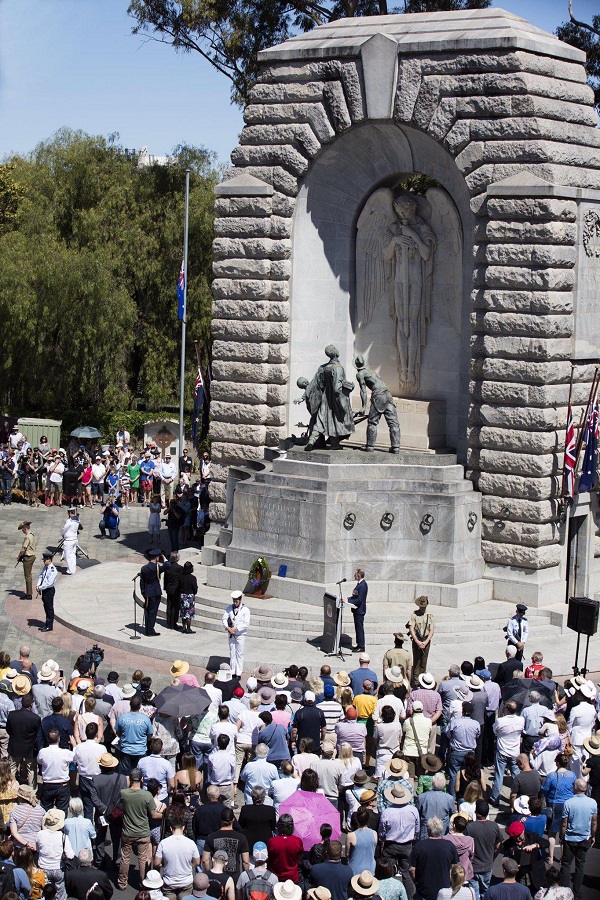 i Australian Women's Weekly, He originated silent tribute to the fallen, 12 November 1969, p. 67.