The Japanese Imperial Forces, having won their swift victory in the South West Pacific, had captured tens of thousands of Prisoners of War (POWs).  These unfortunate people were basically used by the Japanese as slave labour, as Japan was not a signatory to the Geneva Convention.

Moving POWs around SE Asia was generally done by ship.  Initially, with very limited Allied activity, this practice entailed little risk.  As the war progressed, however, Japanese shipping of all kinds came under sustained and increasingly effective attack by long range patrol aircraft and the American submarine fleet.

The Allies had a huge advantage in the form of ‘Ultra’ – decoded Japanese communications, that gave very precise details of all Japanese shipping movements.  All that the Americans and their Allies had to do was to position aircraft and submarines along the course disclosed in the decoded orders, and get the timing right.

This method of transportation thus gave rise to great loss among these men, as they were moved on un-marked Japanese transport ships, the human contents of which were not explicitly mentioned in the Japanese shipping orders.  The ships were thus ‘fair game’ for Allied aircraft and submarines on patrol throughout the SW Pacific. 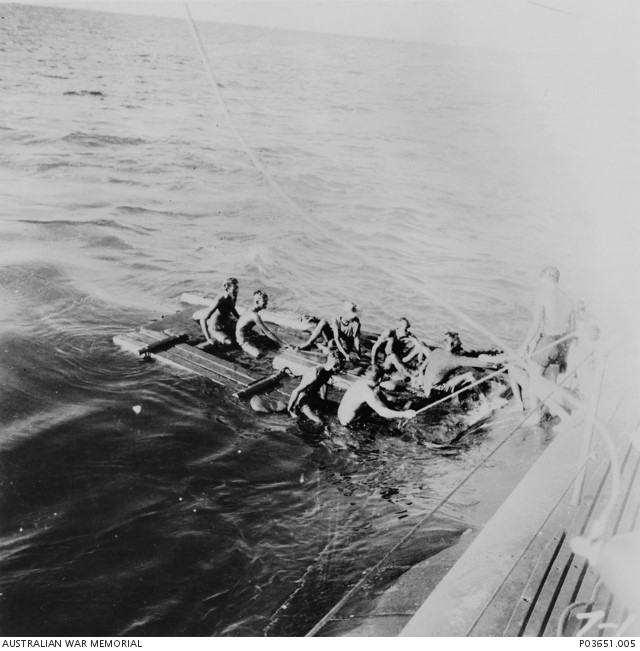 Former Australian prisoners of war are rescued by the crew of USN submarine USS Pampanito (SS-383). These men survived the sinking of two Japanese troop transports, the Kachidoki Maru and the Rakuyo Maru by Pampanito and USS Sealion II (SS-315) on 12 September 1944 respectively. AWM.P03651.005

Two of the worst from an Australian perspective were as follows:

The sinking of the Montevideo Maru is considered to be the worst maritime disaster in Australia's history.  Japanese records indicate that a total of 1054 prisoners (178 non-commissioned officers, 667 soldiers and 209 civilians) died on the Montevideo Maru.1

On 22 June 1942, after the fall of Rabaul to the Japanese, a large number of Australian POWs and civilian internees were embarked on the Montevideo Maru.

Unmarked, she was proceeding without escort to the Chinese island of Hainan, when she was sighted by the American submarine Sturgeon near the northern Philippine coast on 30 June.

Sturgeon pursued, but was unable to engage, as the target was traveling too fast. However, it slowed around midnight.  Unaware that it was carrying Allied POWs and civilians, Sturgeon fired four torpedoes at Montevideo Maru before dawn on 1 July, causing it to sink very quickly.

According to a Japanese eye witness (see below) Australians in the water sang "Auld Lang Syne" to their trapped mates as the ship sank beneath the waves.

There were more POWs in the water than crew members.  The POWs were holding pieces of wood and using bigger pieces as rafts. They were in groups of 20 to 30 people, probably 100 people in all. They were singing songs. I was particularly impressed when they began singing Auld Lang Syne as a tribute to their dead colleagues.  Watching that, I learnt that Australians have big hearts.

On the Montevideo Maru were 22 former Salvation Army bandsmen, who had enlisted together and comprised the majority of the band of the 2/22nd Battalion. 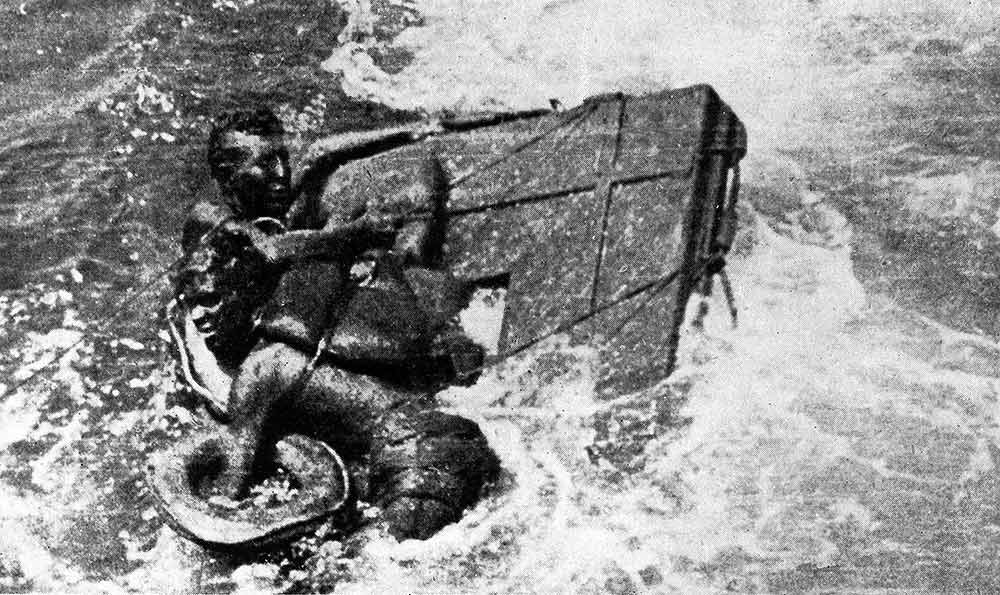 Australian prisoners struggle in the water after their Japanese transport Rakuyo Maru was sunk by US submarines. The unrestricted submarine campaign and the refusal of all belligerents to mark POW transports led to the death of thousands of Allied prisoners. The photograph was taken from the USS Sealion. [AWM P02018.326]

The convoy in which Rakuyo Maru was sailing in September 1944 was heading into deep trouble. Positioned between the Japanese ships and their destination were two American submarine 'wolf packs' (A German submarine tactic later adopted by the US Navy) -- ‘Ben’s Busters’, comprising USS Growler, Pampanito and Sealion II and ‘Ed’s Eradicators’, USS Barb and Queenfish.2

The Rakuyo Maru was torpedoed on 12 September 1944 by USS Sealion II. The other submarines took a toll of other ships in the convoy including the Kachidoki Maru as they followed the convoy on its course. 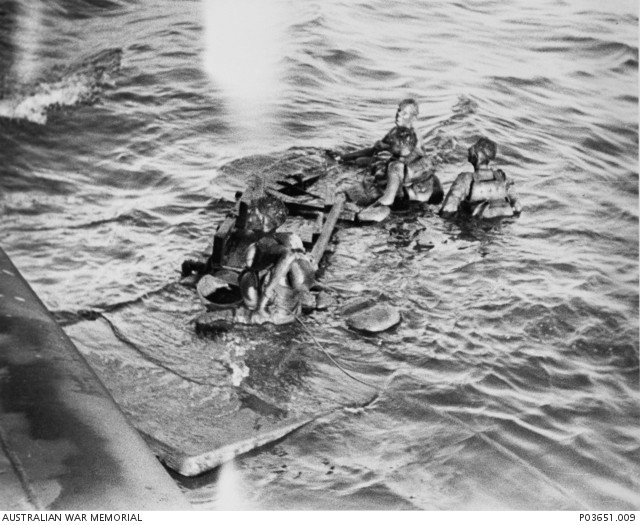 Four Australians, survivors of the sinking of two Japanese prisoner of war transports, are rescued from the sea by crew members of the USN submarine USS Pampanito (SS-383). Covered in oil and clinging to a makeshift raft, they drifted in the sea for several days after USS Pampanito sunk the Kachidoki Maru on 12 September 1944. USS Sealion II (SS-315) had also sunk another transport Rakuyo Maru, carrying more prisoners of war, in the same attack that day. These four men would join additional Australian and British survivors rescued by other USN submarines which also joined in the search. After docking at Saipan on 25 September 1944, the overall group was later repatriated to Australia.

After the ship was abandoned by its crew it had remained afloat for some time, thanks to a cargo of buoyant rubber.  The Japanese crew were picked up by other Japanese ships and with their lifeboats abandoned, the POWs swam to them and clambered aboard helping as many of their mates as they could.  The others clung to floating wreckage and detritus and became covered in oil as the Rakuyo Maru eventually broke up and sank.2

About 350 men had taken to the lifeboats, and they set off towards the Chinese mainland.  They became split into two groups.  One was heard to be fired upon by a Japanese navy vessel.  Included in this group was Brigadier Varley commander of the 22nd Brigade in the defence of Singapore.  They were never heard of again.3

The other group, commanded by electrical Artificer Petty Officer Vic Duncan (a survivor of the sinking of HMAS Perth), expected to suffer the same fate when they were encountered by a Japanese vessel later in the day.  Duncan said to the men in his boats "If you believe in God, say your prayers now". 4  However when asked if they were American or British and they responded that they were Australian , and were amazed to be taken on board back into captivity rather than being murdered in their boats like their comrades. They were transferred to a Japanese whaling ship and continued their journey to Japan.

On 15 September, the US submarines returned to the area.  They were stunned to realise the ships had carried POWs. Pampanito rescued 73 mainly Australian POWs and the other three submarines between them collected 85 more.  All had been among the men who had not been able to get to the lifeboats and were floating on rafts and flotsam.  The survivors were taken to Saipan and repatriated to Australia.

Onboard were 1,317 Australian and British POWs.  Of that total 1,159 POWs died, including the men in the ship’s lifeboats shot up by the Japanese Navy.

https://youtu.be/gP9kzApe3pE  - an amazing colour clip of the rescue by the Pampanito

Vic Duncan was a teacher at Heathcote High School in Sydney in the late 1960s.  A greatly respected man and I am proud to have known him.