The appointment of Air Attaché Group Captain Brinsley to the Australian Embassy in Saigon in May 1963 triggered the start of a RAAF commitment to the Vietnam War that would last until 1975.[i] Humanitarian aid flights made by Dakota A65-119’s from No. 2 Squadron began on 9 May.[ii] No. 2 Squadron delivered upwards of 25,000 kilograms of medical supplies and food to refugees who had been run out of their villages by Viet Cong.[iii]

The situation in South Vietnam worsened due to two military coups in 1964, and the Australian government determined an increase to the Australian deployment was necessary. A training squadron, the Royal Australian Air Force Transport Flight Vietnam (RTFV) was established in June 1964, and trained aircrew in the newly acquired de Havilland Canada DHC-4 Caribou.[iv] The RTFV was sent to Vietnam in August with a strength of 70 men and under the command of Squadron Leader Chris Sugden.[v] It was later joined in service by No. 2 Squadron flying Canberra bombers and No. 9 Squadron flying Iroquois helicopters.[vi] 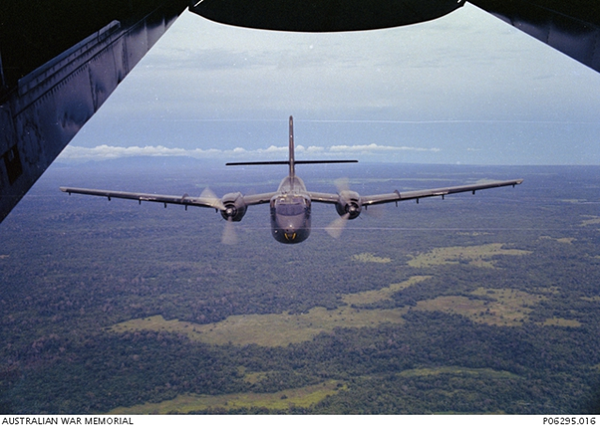 In June 1966, the RTFV was expanded into No. 35 Squadron RAAF.[vii] Across eight years of service, No. 35 Squadron “transported 42,000 tonnes of freight and 680,000 passengers in 81,500 operational sorties utilising 115 airfields across South Vietnam”.[viii] They recorded no casualties.[ix]

No. 9 Squadron flew 237,424 sorties over a five-year deployment with an average serviceability rate of 84%.[x] They were commonly used in support of SAS patrols and medical evacuations, of which they performed over 4,300.[xi] Four personnel were killed during the war.[xii] 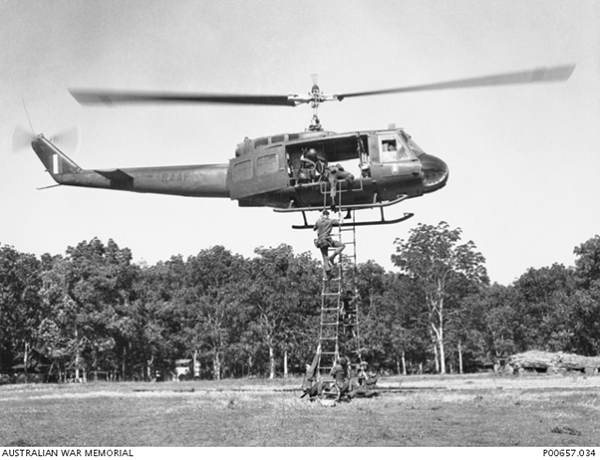 No. 2 Squadron was based at Phan Rang Air Base as part of the USAF 7th Air Force’s 35th Tactical Fighter Wing. They were employed on Combat Sky Spot missions, navigating by radar and releasing bombloads by night.[xiii] They later moved to daytime precision attacks. In November 1970, a Canberra bomber failed to return to base. The remains of this aircraft were not found until 2009 in the Quang Nam Province. The remains of Pilot Officer Robert Carver and Flying Officer Michael Herbert were repatriated to Australia.[xiv] 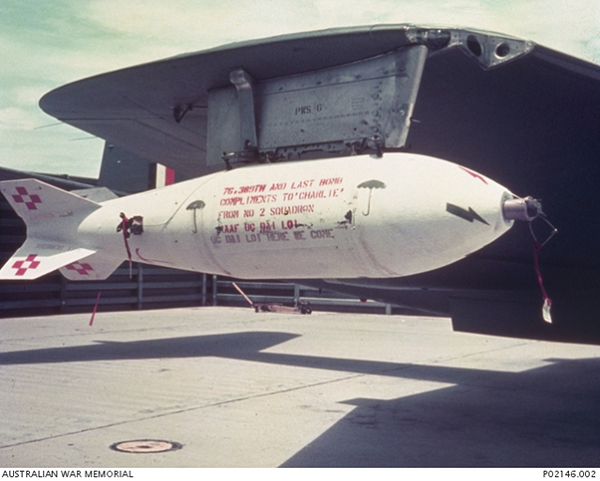 The last bomb dropped by No. 2 Squadron in Vietnam, loaded to the wing of a Canberra light bomber. “76,389th and last bomb. Compliments to Charlie from No. 2 Squadron RAAF UC Dai Loi”
AWM P02146.002

The bulk of the RAAF force had withdrawn from Vietnam by 1972, but operations did not completely cease until 1975, when refugees, orphans and Australian Embassy staff were evacuated after the invasion of the North Vietnamese.[xv]

The man Pat and his orphanage | Australian War Memorial (awm.gov.au) – The civil aid duties of Pat McCormick, No. 2 Squadron RAAF