The Wounds We Cannot See

The poets of the Great War were often adept at articulating not only the horror of battle, but also the suffering experienced by those who served. While “Suicide in the Trenches”, published in 1918, describes that suffering in wartime, that anguish continued for many long after the guns fell silent. With Mental Health Week just behind us and Veterans Health Week ahead, it is fitting to turn to a consideration of Veteran Mental Health that matters as much to veteran wellbeing in the century after World War One, as it did for Sassoon during the conflict.

A parliamentary enquiry into mental health of military personnel and veterans in 2016 found that currently serving and former ADF personnel were considerably more likely to suffer from any mental disorder than their civilian counterparts, with a significant increase in the incidence of affective (mood) disorders in particular. The 2016 report found that almost one quarter of ADF personnel had experienced a mental disorder in the 12 months prior to the study. Of affective disorders, depressive episodes showed the greatest difference between civilian and military populations, with incidents of suicidal ideation approximately double among military personnel, serving and ex-serving, compared with the civilian population.1

At the age of 52, more than a decade after the cessation of hostilities, Elliot’s physical and mental health declined, undermined by his “deep and abiding sense of injustice combined with the strain of his war service and his ceaseless activity”.2 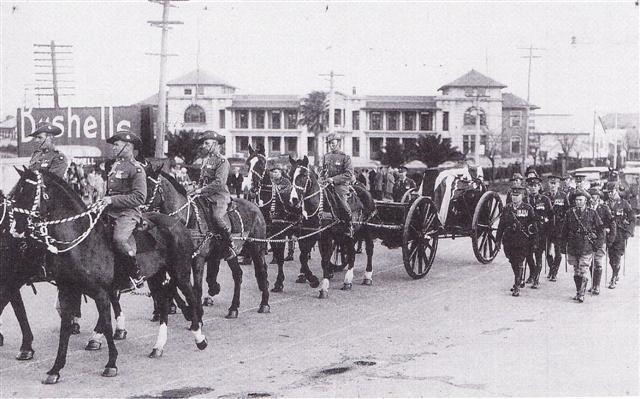 The Funeral Cortege of Captain D.A. Twining, proceeding from Keswick Barracks in the background, to the AIF Cemetery on West Terrace. The procession was lead by Brig Raymond Leane, Army Museum of SA.

The long history of the adverse effect of conflict on mental health has arguably been accompanied by an equally long history of the stigma surrounding mental illness. If the Mental Health Week programming on ABC each year would have the viewers take away anything, it would be to move beyond the stigma and stereotypes and towards greater understanding.

For the significant proportion of the Australian population, including the 11,016 ADF personnel who experienced a mental disorder in the 12 months preceding the study, stigma plays a major role in the unwillingness to seek help. Harm to career, the prospect of being treated differently or seen as weak were the most significant across commissioned and non-commissioned officers and other ranks. These factors are not exclusive to modern combatants.

For Sassoon in 1918, the greatest crime of the cheering crowds was the ignorance of suffering that had no outward manifestation. Even worse is the pretence of ignorance stemming from stigma, stereotype, and misunderstanding. There has recently been more focus than ever before on the mental health of veteran and serving communities. It is a trend that needs to continue if our service and ex-service populations are to receive the support they need and deserve.

If this article has raised any concerns or issues, please contact Beyond Blue on 1300 22 4636 and at https://www.beyondblue.org.au/