No. 10 Squadron RAAF was formed on 1 July 1939 at RAAF Base Point Cook under the command of Wing Commander Leon Lachal.[i] Members of the Squadron departed for Britain in July to be trained on Short Sunderland aircraft and to return to Australia with enough Sunderlands to equip the squadron.[ii] On 10 October 1939, a No. 10 Squadron aircraft made a flight to Tunisia – the first act of active service from any Commonwealth squadron in the Second World War.[iii] 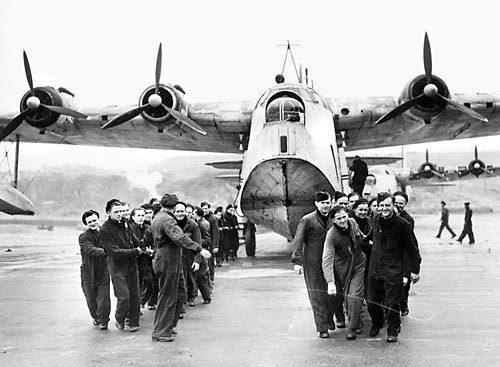 No. 10 Squadron personnel hauling a Sunderland flying boat ashore for maintenance at Plymouth on England’s south coast in May 1945
AWM SUK14695

The squadron remained in the United Kingdom throughout the war as part of Costal Command. They sank six U-boats and set the Coastal Command record for most patrol hours flown in a month in February 1944 at 1,143 hours.[iv] They remain operational today at RAAF Base Edinburgh in South Australia.[v]