Enlistment and Embarkation in World War One 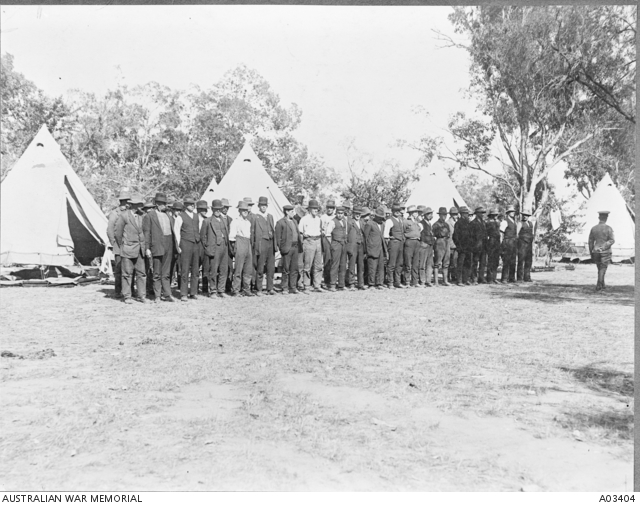 A group of early enlistments lined up at the recruiting depot. AWM A03404

The raising of the AIF and its despatch overseas was an enormous task that exceeded by several orders of magnitude any remotely comparable mobilisation of people and resources in Australia's short history.

The only thing that came close was the Gold Rush of the 1850s, and that was hardly organised

What is less generally realised is that Australia was not totally unprepared for War.  Australia had a population of less than 5 million on the outbreak of war in 1914.  About 3 million were men.  More than 400,000 men enlisted (or attempted to do so).  More than 330,000 were deployed overseas.  In todays terms these number beggar belief.  The cost and legacy that were to come was beyond belief.

Europe in 1914 has been described as a "dangerous place" because of a complex web of animosity, alliances and suspicion.  German Naval expansion and militarism sat behind most of this mis-trust.  However, it had been so for some time, and a growing awareness of Germany's imperial ambitions had moved Great Britain to begin to prepare for what might come.

In pre Federation Australia, defence scares were not new.  The beach side town of Glenelg in South Australia had woken one morning in 1882 to find a Russian Naval Squadron riding at anchor in Holdfast Bay.  (see story).  This scare reinforced the need for the Coastal Artillery forts that lined the coast around capital cities from Brisbane to Adelaide.  The Garrison artillery that manned these forts formed the basis of the future Royal Australian Corps of Artillery.

In 1899, before Australia had even become a nation, each of the Colonies raised multiple contingents to serve in the South African or Boer War and on a much smaller scale,  the Boxer Rebellion in China.  By the end of the Boer War conflict, the Colonial contingents had merged to become one.  The result was that Australia had significant numbers of experienced soldiers, many of whom would go on to serve in the coming conflict and to train and prepare others.

Field Marshal Lord Kitchener had been charged with the oversight of preparations across the Empire, but particularly in the dominions most likely to provide the most manpower;  Canada and Australia.

Universal Military Service and a large network of militia and cadet units were central to this plan.  Tens of thousands of men belonged to rifle clubs  Australia acquired its own small arms production facility with the establishment of the Small Arms Factory Lithgow in 1907.  Australia had been supplying the Indian Army with horses, the famed 'Walers' which would later similarly equip the Light Horse.

Soon after the outbreak of War, AIF units began forming from around the middle of August, at camps situated within marching distance of each of the state capitals.  These included: