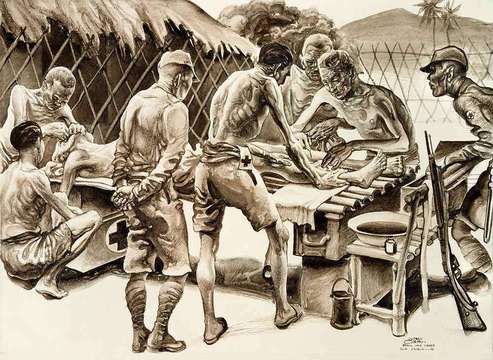 A charcoal sketch of an Australian PoW being operated on under improvised conditions in the field with Japanese guards looking on. The availability of even basic medical care and some access to drugs was a critical determinant of life or death for many. Malnourishment, overwork, illness and beatings took their toll on men of all ages.
http://hellfire-pass.commemoration.gov.au/surviving-the-camps/images/large/AWM_ART25052-L.jpg

In broad terms Australian servicemen and some civilians were captured and interned variously by Italy and Germany as a consequence of campaigns in Greece, Crete, North Africa, the Middle East and the Air War over NW Europe, and by Japan primarily as a result of the Fall of Singapore and fighting in the SW Pacific.

Over 30,000 Australian servicemen were taken prisoner in the Second World War and more than 8,000 gave their lives.

More than two-thirds of those taken prisoner were captured by the Japanese during their advance through south-east Asia in the first weeks of 1942.

The fortunes of PoW varied enormously; while Italy and Germany largely observed the Geneva Convention, Japan completely flouted it, neither having been a signatory nor conforming to what was by then accepted practice among the European powers.  This simple fact is reflected in the casualties among PoW. Two-thirds of those taken prisoner were captured by the Japanese during their advance through south-east Asia in early 1942. While those who became prisoners of the Germans and Italians lost 265 of their number and so the vast majority returned home at the end of the war, 36 per cent of prisoners of the Japanese died in captivity.

Australian PoW ended up scattered all over Nazi occupied Europe and in SE Asia.  Many Australian PoW in the SW Pacific area lost their lives at sea during the course of trans-shipment to Japan where they were intended to work as slave labour in coal mines.  A number of these ships were torpedoed by US submarines, which did not realise the nature of their cargo.  These incidents are dealt with in a soon to be published article "PoW Death Ships", and collectively constitute Austrlaia's worst loss of life at sea, numbering more than 1,000 PoW and civilian internees .

The Japanes also routinely executed captured aircrew, and infamously, in February 1942, machine gunned to death a group of captured Australian nurses at Bangka Island near Sumatra after their ship, the Vyner Brooke, was sunk trying to get away from Singapore prior to its fall.

The Australian PoW experience and the broader conduct of the campaigns in Malaya  / Singapore are comprehensively dealt with in Peter Brune's excellent book "Descent into Hell", published in 2012.