Australia has been fortunate compared to many other countries in the world in that its exposure to warfare on its own soil has so far been relatively confined. Australia’s engagement in war has largely been based on expeditionary forces despatched to overseas locations, usually in concert with Allies, and therefore exposure to the effects of warfare has largely been limited to combatant service personnel.

The toll on our combatant personnel is writ large on the National Roll of Honour at the Australian War Memorial in Canberra. 102,784 names are listed from the NSW contingent to the Sudan in 1885 through to the present day. 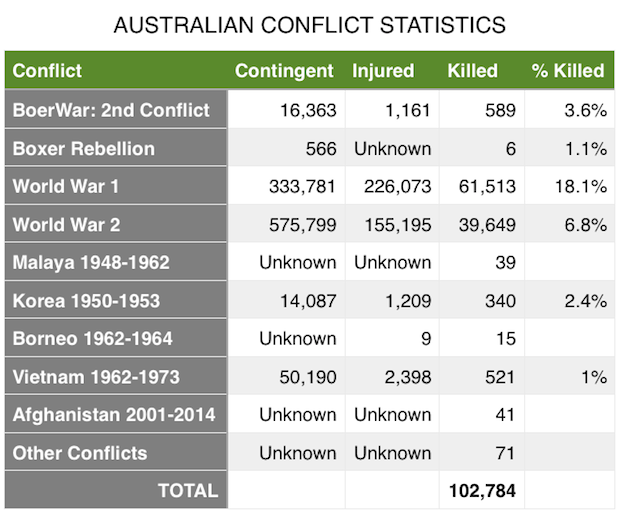 What is not so tangible is the impact of traumatic experience on survivors; service personnel, their families and others caught up in the calamity of war.

As has been discovered more recently, peacekeeping and humanitarian operations take a different kind of toll of participating personnel.  In the modern era, terrorism and asymmetric warfare pose new and as yet not clearly defined threats on Australia’s ‘home turf’.

On the Front Lines

Each conflict has presented our people with a radically different set of circumstances, defined largely by technology and the social politics of the day. The technology of war is normally defined in terms of fire-power, protection and manoeuvre, command, control and communications.
Each conflict presented various combinations of these.  Inevitably Australia joined a conflict that someone else had started so there was initial reaction to an enemy that had the initiative.  Our response has been around the development then application of technical, intellectual, industrial and tactical innovation to adapt to the environment and ultimately neutralise or destroy the threat with which we were presented, to varying degrees.  Most recently the outcomes have been much less decisive than in the past..
The passage of time has seen a transition of deployed forces from a largely part-time citizen’s militia, though an initially very poorly equipped but massive citizen’s force with a small full time professional core in both World Wars to the smaller better equipped and highly trained full time professional force in more recent conflicts.
Technology has accelerated the trend of ‘emptying the battlefield’ of combatants in relative terms.  But then the ‘total war’ of WW 1 and 2, Korea and even Vietnam has given way to a far more constrained operational environment.  In recent conflicts the enemy has been increasingly indistinguishable from the surrounding civil population.

Some conflicts such as the Boer War, Korea, and SE Asian operations in the 1960s seemed to be largely subsumed by wider events and so the public’s cognisance of them was quite low.  However, soldiers returning from WW 1, WW 2 and Vietnam found Australia a changed place from that which they left.
The Boer War’s defining moment at home was Federation.  In many respects the Boer War heightened the sense of national pride that bound the colonies to form the new country.
World War 1 – The conscription debate split the country, female suffrage (the right to vote) and the burden of grief that descended on the community as the losses mounted were the defining elements of the Home Front 1914-18.  But the war was very definitely ‘over there’.
In World War II it was again initially ‘over there’ but complacency was shattered by the initial fear of invasion and attack on home soil after the Japanese entered the war, followed by industrial mobilisation of the female workforce, with most able bodied men away around the globe.  Rapid industrial development paved the way for a post war economic boom.
Korea and the small Asian wars were conducted in the midst of the Cold War.  The threat of “Communist encroachment” and nuclear Armageddon was never far from people’s minds.
The Vietnam War took place during an era of massive social and political change and a public that was far less accepting of a government ‘party line’ than had been the case previously.  Domestic politics had a much greater impact on our involvement than the military situation on the ground.

This quote from George Mitchell, MC,DCM from WW1 and WW 2 sums up what it was like to return from war for a large number of soldiers.
"The war marches to its end. Soon you will enter as recruits into civil life, which many of you left as boys. Do not imagine it will be easy. Here you have learnt to rely on and trust your comrades. If you carry that trust and good faith blindly back to civil life you will find, as we did after the last war, that hordes of parasites will be waiting to cheat and chisel you out of what little you have.

You will find that when you return a large body of people regards you as fools for risking your life overseas, for not being clever enough to malinger out of active service. Do not let this embitter you, but rather make it strengthen your determination to fight the better. For when the war with Japan is over, the fight for Australia will be but beginning.

The profiteering and corruption you will find in high and low places will disgust you. Do not take the weak way of turning aside. You owe it to your comrades, the living and the dead, to carry on. You owe it to Australia to play your peacetime role as well as your wartime task.

It is the duty of each one of us to fight for honesty and decency, for good government, for the dignity of man, and the right of the children of grow up in a healthier, happier and wiser Australia…

All life is a fight, to keep on in peace as now, with zest and determination to reach the objective. Our objective is the well being of Australia, but the way is full of traps and pitfalls, the climb will be steep, long and hard. The march will demand a more enduring courage than any battlefield.

So I wish you the success you have earned, and good fortune in the fighting both of this war and of the peace to come."

George Deane Mitchell, MC, DCM, on being relieved of his command in New Guinea in WW 2, having distinguished himself from Gallipoli to Beaurevoir in WW 1. Read his book "Backs to the Wall" an evocative eye witness account of WW1.

To help care and support the large number of service men and women after the return from war, the RSL was formed in 1916 by troops returning from the First World War.  Legacy was formed concurrently by largely the same group of people to look after the large numbers of widows and families left behind by the Fallen in an environment before effective social welfare support systems had come into existence.
The Returned and Services League has grown to 1500 Sub-Branches Australia wide and over 240,000 members, making it the largest ex-service organisation in Australia. The challenges have varied in scale and emphasis but the principles remain the same through successive conflicts and peacekeeping operations.

There has been a much wider acknowledgement of the psychological toll of combat and other conflict-related trauma within society over the 100 plus years of military operations.  The transition from “shell shock” in WW1, “Lack of Moral Fibre” (WW 2) to ‘Battle Fatigue’ (Vietnam) and more recently ‘Post Traumatic Shock Disorder’, and the evolution of more appropriate treatment regimes.  And it is not just the result of combat operations.  Our Peacekeeping and Humanitarian operations over the past 20 years comes with its own instances of exposure to traumatic experience that takes a cumulative toll of participants in these operations.

Part of the process of bridging the gap for returned service personnel is to give them an audience to tell their stories.  We hope the RSL Virtual War Memorial will have a part to play in facilitating that process.