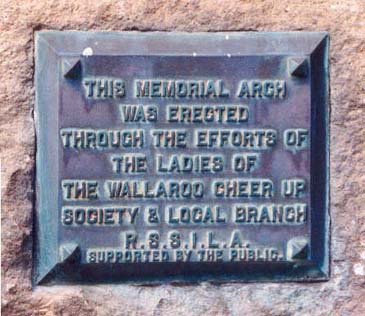 LOCATION: Irwin Street, in front of the Town Hall

THEY GAVE THEIR ALL

THIS MEMORIAL ARCH
WAS ERECTED
THROUGH THE EFFORTS OF
THE LADIES OF
THE WALLAROO CHEER UP
SOCIETY& LOCAL BRANCH
R.S.S.I.L.A.
SUPPORTED BY THE PUBLIC

WE WILL REMEMBER THEM

Showing 4 people of interest from memorial