Waikerie Back to Search 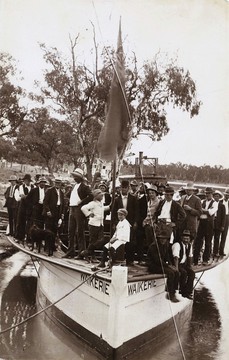 Wailerie is a South Australian town and crossing point on the south bank of the River Murray in what is known as "The Riverland" district of the State.

Before European settlement, the Ngawait tribe inhabited the area. The river and surrounding land provided everything they could possibly need - fish, shellfish, birds, kangaroos, and native fruits. Now, Waikerie is well known for citrus growing and gliding, as the flat dry terrain provides good thermals. Waikerie hosted the 14th World Gliding Championships in 1974.

The town of Waikerie derives its name from Weikari, which is claimed to mean 'the rising'. However some linguistic anthropologists argue that the name refers to the spider creator god from local creation myths.[3] The Waikerieness was said to fend off monthly centipede infestations by leaking seeds all over the area. This refers to the emergence of many ghost moths (especially Trictena argentata : Hepialidae) from the ground among the river red gums after heavy rain.

Showing 8 people of interest from Waikerie

Showing 4 memorials of interest from Waikerie