Burnside Back to Search 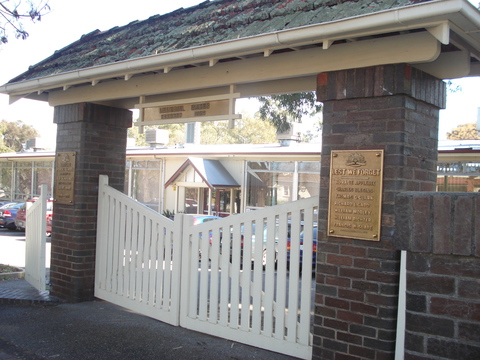 Burnside is one of the city of Adelaide's original suburbs, about 5km east of the Adelaide CBD extending in to the foothills of The Adelaide Hills.   The name is derived from a Scottish term, 'burn' being the word for a creek.   So Burnside is literally 'beside a creek'.   There are in fact two in the vicinity, the perhaps unimaginatively named First and Second Creeks, which are generally dry in summer but flow vigorouly after rain in winter.

Burnside was established and named by Peter Anderson and his family who emigrated from Scotland in 1839. Anderson started a large farm on leased land near Second Creek. The farm had a large number of animals including pigs, poultry and cattle as well as barley and wheat crops.

By the 1870s the area had developed into a small village with a number of pubs in the vicinity of the intersection of Lockwood Road and High Street.  Burnside Post Office opened on 21 July 1863.

There are a number of parks but most noticeably bordering several that are shared with other suburbs. The Burnside Swimming Centre is located in nearby Hazelwood Park. Langman Reserve is part of both Burnside and Waterfall Gully and the large Newland Park has several ovals. The Feathers Hotel, a Georgian style pub, is located within the suburb. It is home to Burnside Primary School, a State government school. A number of churches in various denominations including Baptist, Lutheran and Anglican also call the suburb home.

Burnside is a prestige address.   Owing to its being one of Adelaide's first suburbs, there are many grand historic homes located within the area.  Most modern homes are built on subdivisions of the early large etestates in the area. Many homes extend up into the foothills which  offer impressive views of the city of Adelaide.  These days the title of the suburb is also applied to a large nearby centre that is on the interstection of Portrush and Greenhill roads which is the intersection of four suburbs - Tusmore, Linden Park, Glenunga and Toorak Gardens.   The City of Burnside Council Chambers are located on the same intersection, diagonally opposite the shopping centre.

Showing 8 people of interest from Burnside

Showing 2 memorials of interest from Burnside