Crystal Brook Back to Search 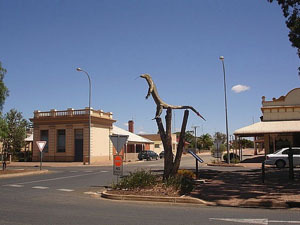 Crystal Brook is a rural town in South Australia's mid north, named after the spring-fed creek next to which it was founded. It is 197 kilometres (122 mi) north of Adelaide and a population of 1,100, and serving the surrounding area as a services centre.  The local farming community still supports many small businesses in the town.

Crystal Brook is situated on Goyder's Line, which is a survey line, named after a former Surveyor General of SA, that serves as a demarkation line for reliable rainfall.  The town benefits from a temperate mediterranean climate zone near to the east,[3] making possible slightly more intense farming in the region. Further west and north-west lies some marginal, semi-arid farmland.

The spring fed Crystal Brook (or creek) was the town's principal water source until 1890 when the Beetaloo Reservoir was completed.

The town lies astride the Heysen Trail, one of Australia's premier long distance walking tacks extending from Cape Jervis to the Flinders Ranges.

The Crystal Brook area has a proud record of service in the nations name with many memorials attesting to the service of its citizens in several conflicts.

Prominent identities associated with Crystal Brook include a Victoria Cross winner, Arthur Percy Sullivan, who was one of two men, both Australians, who enlisted into and were awarded the Victoria Cross for actions in Russia with the North Russian Relief Force in 1919.   A South Australian Premier (2001-2002) , the Hon Rob Kerin MP, also hailed from Crystal Brook.

Based on an article in Wikepedia.