"This is not a peace. It is an armistice for twenty years" - French General Ferdinand Foch, 1919 upon the signing of the Treaty of Versailles[i]

Today marks the 80th anniversary of the declaration of war upon Germany by the United Kingdom and France and thereby the beginning of the Second World War. This declaration came after the German invasion of Poland two days before and followed a period of mounting tension and crisis over the past few years.

When the newly established German Republic signed the Treaty of Versailles in 1919 to formally end the First World War, it agreed to take responsibility for the war, sacrifice large amounts of territory to its neighbors and pay reparations to the Allies for the damage of the war. The reaction from the German public was not positive. Many, especially on the political right, argued that German honour had been betrayed by the politicians at Versailles and that the army had not truly lost the war but had been “stabbed in the back” by those on the home front.  A number of extremist political groups began to appear with the aim of rejecting the treaty of Versailles and restoring German greatness.

The Signing of Peace in the Hall of Mirrors - by Sir William Orpen. https://commons.wikimedia.org/wiki/File:William_Orpen_%E2%80%93_The_Signing_of_Peace_in_the_Hall_of_Mirrors,_Versailles_1919,_Ausschnitt.jpg

The National Socialist German Workers Party (Nazi Party) began as a small far right group meeting in the beer halls of Munich during the chaotic years after the end of the First World War. Originally known as the German Workers Party, it was rechristened upon the takeover of a passionate orator, Adolf Hitler. Hitler first tried unsuccessfully to overthrow the German government in 1924 in what became known as the “Beer Hall Putch” but was arrested and put on trial. This greatly boosted Hitler's profile and while serving a short prison sentence, he laid out his extremist thoughts in a book titled “Mein Kampf” (My Struggle). As the German economy stabilised in the mid 1920s, the appeal of the Nazi Party and other extremist factions such as the Communists waned.

When the global economy collapsed in October 1929, the German economy was particularly affected as a result of the lingering effects of the chaos of the years following the end of the war. Unemployment skyrocketed and the political centre collapsed. In the 1930 election both the Nazi and Communist parties gained votes and seats at the expense of more moderate and democratic parties. The streets of Germany soon became a battlefield for fights between the paramilitary forces of the two extremist factions. Again, in the 1932 election, support for the centre further collapsed and the National Socialists became the biggest party in the German Parliament. Other parties soon found it impossible to form stable majorities and on 30 January 1933, they reluctantly agreed to serve in a government led by Adolf Hitler, mistakenly believing that a cabinet stacked with more moderate conservatives would be able to control the anti-Semite extremist. They were quickly proven wrong.

Just over a month after being appointed Chancellor, Hitler was given the opportunity to cement his power when a Dutch anarchist set fire to the Parliament building in Berlin. Emergency decrees were issued that suspended many civil liberties and allowed the arrest of many political enemies. After an election, the new Parliament was pressured to pass an “Enabling Act” that allowed Hitler, as Chancellor, to assume total control. Hitler's coalition partners were subsequently systematically arrested or pushed out of power until the Nazi Party was in total control. By the end of the year the Nazi Party was declared the only legal political party in Germany. 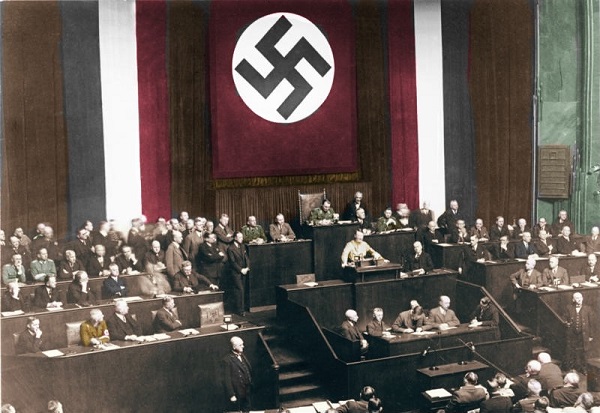 Adolf Hitler gives a speech to the German Parliament regarding the Enabling Act. https://commons.wikimedia.org/wiki/File:Enabling_Act_in_colour.jpg

At the same time the Fascist regime of Italy and the imperialist leadership of Japan were also cementing their non-democratic control over their populations. In Italy Benito Mussolini and his Fascist Party had taken control in 1922 after the “March on Rome”. The Fascist Party aspired to a recreation of the Roman Empire and set forth on this mission in 1935 with the invasion of Ethiopia. In Japan, the imperialist leaders had progressively clamped down on civil liberties and democratic institutions. Beginning in 1931, Japan began to move into Chinese territory with the invasion of the North Eastern province of Manchuria. In 1937, the Japanese invaded China proper. The stated goal of the Japanese leaders was to free Asia from western influence and to create an “East Asian Co-Prosperity Sphere”. This resulted in these countries being drawn into conflict with the western democratic powers and showed the impotence of the League of Nations that had been set up after the war to deal with situations just like these. It also drew them into closer relations with Germany and in 1936, the first in a series of treaties were signed beginning with the Anti-Comintern Pact, followed by the Pact of Steel between Germany and Italy in 1939 and the Tripartite Pact between all 3 powers in 1940. This alliance became known as the “Axis Powers”.

In the second half of the 1930s, Hitler became progressively more aggressive in his foreign policy towards his neighbours. Almost as soon as he came to power, Hitler began to secretly expand and modernise the German military in defiance of the Treaty of Versailles only revealing his actions into 1936 with the remilitarisation of the Rhineland. Under the terms of the treaty, this France-bordering region was not allowed to have German troops stationed on its territory. In the morning of March 6, German forces began to move across the bridges under the instructions to retreat if they were opposed by any French forces, however, the French did nothing. A policy of appeasement had become prevalent amongst the leadership of Britain and France and it was believed that letting Hitler get his way would avoid a return to war.

The next move Hitler made was the March 1938 invasion of the German speaking nation of Austria, known as the Anchluss. As the invasion was largely welcomed by the local population, who after all were essentially Germans in all but name, the Western Allies again did nothing.

The September 1938 crisis over the status of the German speaking provinces of Czechoslovakia was the next step Hitler and the Nazi leadership made in their goal to bring all German speaking peoples under their control. Czechoslovakia, the last remaining democracy in central Europe was prepared to fight and the Western Allies, desperate to avoid war agreed to a conference in the German city of Much. Czechoslovakia was not invited. At the conference between Neville Chamberlain of Britain, Édouard Daladier of France, Benito Mussolini of Italy and Adolf Hitler of Germany it was agreed to allow Germany to occupy the German speaking territories on the promise that the rest of Czechoslovakia would remain free and independent. Germany also agreed to pursue no further aggressive foreign policy. Chamberlain returned to London as a hero declaring that the agreement was “Peace in our time!” Others, such as prominent backbencher Winston Churchill, were less optimistic saying in the House of Commons that it was “A total and unmitigated defeat”[ii] and predicted that the rest of Czechoslovakia would soon be occupied. On the morning of 15 March 1939, German troops entered remaining Czech parts of Czechoslovakia. The policy of appeasement had been exposed as a failure. The Western Allies agreed to fight if the Germans made any further aggressions. 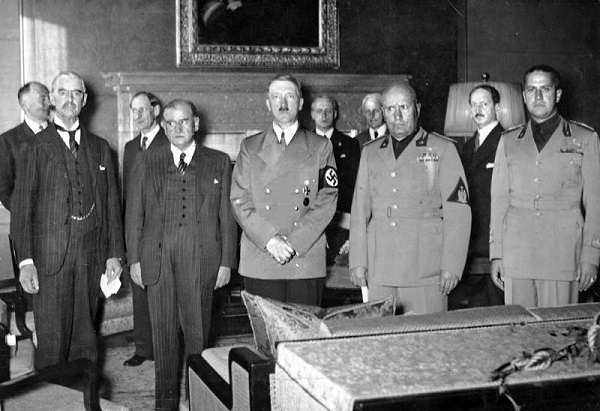 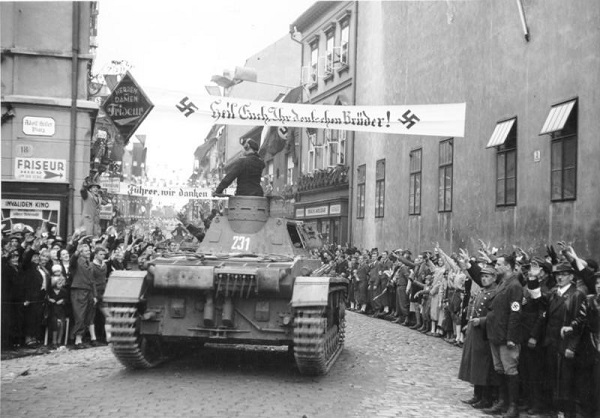 Heavy German Tanks drive through the city of Komtau, Czechoslovakia that is decorated for the occasion. 9.10.1938 https://commons.wikimedia.org/wiki/File:Bundesarchiv_Bild_146-1969-065-26,_Anschluss_sudetendeutscher_Gebiete.jpg

After absorbing Czechoslovakia, Hitler turned his attention to Poland and the Free City of Danzig. Large parts of what was now Poland had been German territory before the First World War and Hitler wanted it back. Danzig had become an international city under the governance of the League of Nations. Throughout the middle of 1939, the Nazis spread stories of ethnic Germans in Poland being oppressed and demanded that the territory be handed over to Germany. The Poles promised to fight and this time the Western Allies backed them up and agreed to go to war with Germany over Polish independence. The world was shocked on August 23 when it was announced that Germany and their ideological mortal enemy, the Soviet Union had signed a neutrality pact and that they would not resist a German invasion of Poland. In fact, it had secretly been agreed that they would divide the country between them, something that the world did not discover for several weeks.

At dawn on the 1 September 1939, the German army swarmed over the frontier into Poland. The relatively primitive Polish army tried to resist but it was futile against the tactics of Blitzkrieg.

After insisting that the Germans withdraw from Poland, the British and French gave Hitler until 11:00 on the 3rd of September to withdraw their forces from Poland or a state of war would exist between them. Once this deadline had passed, the British Prime Minister Neville Chamberlain gave a radio broadcast to announce that the Second World War had begun.  Only an hour and a half later, the Australian Prime Minister Robert Menzies gave a similar broadcast saying:

“Fellow Australians, it is my melancholy duty to inform you officially that, in consequence of the persistence of Germany in her invasion of Poland, Great Britain has declared war upon her, and that, as a result, Australia is also at war.”[iii] 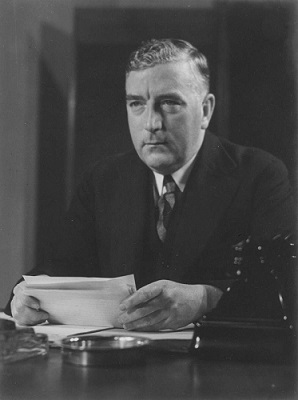 Australian Prime Minister Robert Menzies in September 1939, broadcasting to the nation the news of the outbreak of World War II. https://commons.wikimedia.org/wiki/File:Nla.pic-an23217367-v.jpg