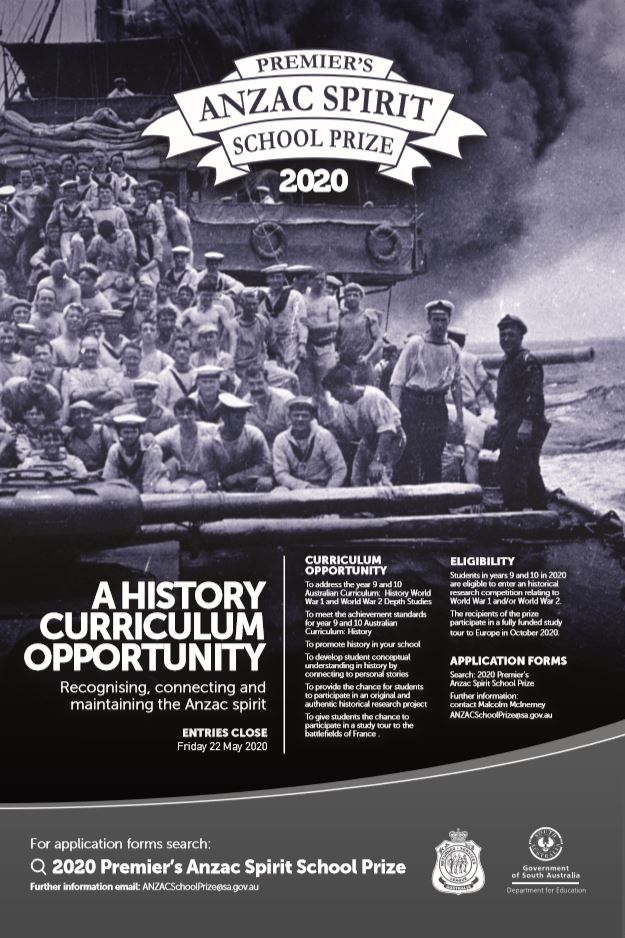 The Premier's ANZAC Spirit School Prize was first established in 2007 by the SA State Government at the suggestion of, and in association with, the SA Branch of the RSL. The prize aims to encourage young South Australians to recognise, connect with and maintain the ANZAC spirit.

Participants in the competition research and write the biography of a serviceman or woman who served Australia in World War I or II and describe how that individual embodied the ANZAC Spirit.
The students adjudged the winners of the competition are taken on an escorted overseas tour of a place associated with Australians at war.
The Virtual War Memorial Australia is a valuable resource for students entering the competition. In 2019, 11 of the 16 winning entries, and 61% of all the entries submitted for judging, included the VWMA in their bibliographies. Many schools have their students research a soldier to upload on the VWMA, and then choose the best of that student work to submit for the Premiers' ANZAC Spirit Prize. if you would like to join them, email us at schools.program@vwma.org.au.

From 2007- 2013 prizewinners visited locations particular to their study and participated in the Last Post ceremony at the Menin Gate in Ieper, Belgium, a community commemoration at Dernancourt in France and at the Dawn Service on ANZAC Day at the Australian National War Memorial at Villers-Bretonneux in northern France.

In 2014, the prizewinners visited Singapore and Korea with a focus on WW II and the Korean conflict. In 2015, 22 students travelled to Gallipoli to take part in the historic ANZAC Centenary Dawn Service.

In 2016, 2017, 2018 and 2019, winning students travelled to Vietnam. The 2019 students were escorted by the VWMA's own Robert Kearney, on his first journey back to the country since his second tour of duty in 1971. See some of those student reflections here.

The competition associated with the tour provides the opportunity for young South Australians to identify, examine, and articulate the nature of commitment and in many cases the sacrifices of Australian service men and women in the service of their country during times of conflict.

In addition to the entries that you can read online via the Virtual War Memorial site, you can find more entries online at Veterans SA : Prize winning entries

The prize is open to all South Australian students in Years 9 and 10 in 2020. Only four entries from a school can be submitted via the school competition.

Following a selection process, students will be invited to participate in the State Government’s fully funded study tour to France during the October school holidays in 2020. The cost of travel, accommodation and meals are covered during the eleven day escorted tour to Northern France.

Teachers will also be selected to accompany the students on the study tour. Teachers are eligible to apply if they have worked directly with students entering the 2020 Premier’s Anzac Spirit School Prize.