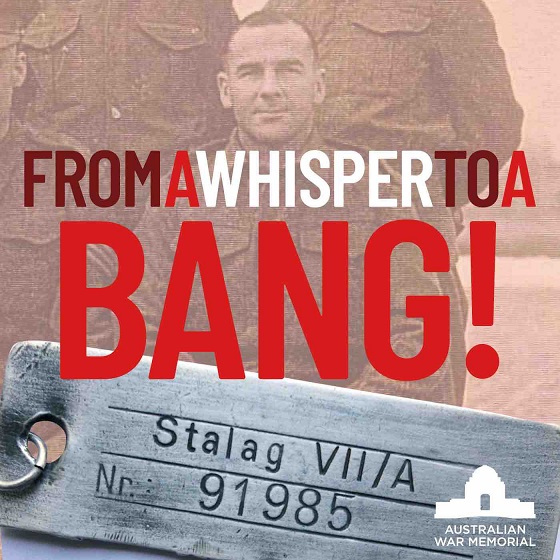 From A Whisper To A Bang!

From A Whisper To A Bang! is a six-part podcast series about war, remembrance, Australian prisoners of war in Germany during the Second World War, and an emotional journey of historical empathy, presented and produced by Megan Spencer and commissioned by the Australian War Memorial. Megan is a podcaster with a distinct voice and style of her own. Known for her work as a broadcaster, writer, critic and commentator on ABC Radio and SBS Television, at heart Megan is a storyteller.

In Episode 01 Megan introduces the story of her grandfather, Corporal “Harry” Spencer, 2/7th Battalion. A prisoner of war in Germany during four years of the Second World War, Harry was one of several thousand Australians captured by the German Army in 1941, during the ill-fated battle of Crete.

Corporal Spencer’s story provides the catalyst for interviews, conversations, and insights that help broaden our understanding of history, remembrance, and the human consequences of war.

What kind of an effect did being a prisoner of war have on Harry and his family both then and now? A chance family reunion, revealing the inter-generational ripple effects of two world wars, inspires Megan to embark upon a life-changing pilgrimage to recover the past and practice remembrance, walking in the shoes of her ancestors.

In Episode 02 Megan visits the crumbling, 75-year-old ruins of two of the four stalags her grandfather Corporal Harry Spencer, VX1113, Prisoner No. 91985, was held in, between 1941-1945, after being captured in Crete by the German Army in WW2.

The first, Stalag VII-A, is in Moosburg in Germany’s south; the other, Stalag 357 near Fallingbostel, is in the north. They were two of Germany’s biggest POW camps during the war, each housing tens of thousands of prisoners from all over the world.

With the help of locals, family members, military historians and narration from Harry’s handwritten memoirs, Megan dives deeper into her grandfather’s POW experience, reimagining it ‘in situ’. It is a highly emotional trip – one that, as she finds out, is only just beginning…

Harry Spencer was just a young boy when his older brother Dick died serving in the First World War. An identical twin, Private Richard “Charles” Spencer, No. 5218, 14th Battalion, was killed on the Western Front in 1918, a few days shy of his 19th birthday. No doubt Richard’s enlistment – and his twin brother Hugh’s – played a big role in Harry’s decision to join up in 1939.

Hungry for even more knowledge about her family’s military past, in Episode 03 Megan travels to Belgium to find out how, when, and why Richard died. It is the first time any Spencer has visited his grave. Alongside thousands of other “remembrance pilgrims”, Megan discovers an entire town built as a war memorial – and the incredible details of her great-uncle’s story.

In the muddy paddocks of Ypres and under the solemn Menin Gate, Megan shares common ground with total strangers, founded in history, empathy, and remembrance.

“Lest we forget” is a phrase that memorialises those fallen in war. In this special Anzac Day episode of ‘From A Whisper To A Bang!’, Megan takes a step back to look at the world in which we now live, asking: Are we forgetting? What happens if we do? And, while we might remember, do we remember “well”?

In our busy, fast-changing “post-truth” world, she explores the role of remembrance now. Travelling around Australia – and attending her first Anzac Day dawn service since returning home from Germany - she speaks with veterans, a politician, an empathy expert and historians - those whose business it is to keep history accurate, society accountable and the lessons of the past alive.

Amid the Australian War Memorial’s sea of 62,000 woollen poppies heralding the Centenary of the Armistice, Megan also “knits” together insights gleaned from fellow remembrance ‘pilgrims’, eager to share what remembering means to them.

Warning: Aboriginal and Torres Strait Islander listeners are advised that this episode (and its associated material) contains the names of, references to, voices and images of people who have since passed away.

Aboriginal and Torres Strait Islander people have served in every conflict, peacekeeping and humanitarian operation in which Australia has been engaged. One of the most celebrated soldiers is Gunditjmara man Captain Reginald Saunders. While it's not known whether they knew each other, “Reg” and Megan’s grandfather Harry served in the same battalion during the Second World War, fighting the very same battles against the German forces in Libya and Greece, with both eventually stranded on Crete.

As soldiers they were equals, sharing very similar experiences. Back home it was a different story: in spite of his service, Saunders and his young family faced continual discrimination and disadvantage, due to his race. This did not happen to Harry.

Continuing further down the road of remembrance and historical empathy, in Episode 05 Megan explores the extraordinary yet unheralded story of Indigenous service and sacrifice for Australia – and the important recovery work being done to ‘square the ledger’, when it comes to this ‘quieter’ aspect of Australia’s military history.

Across land and sea, through two world wars, three generations, and umpteen conversations, Megan has been on an epic journey, listening and leaning in to significant conversations about remembrance, its importance and possibilities.

Set against the recent Centenary of the Armistice, in this final episode, Megan reflects on what she’s learned across the series, from what others have said and by walking in the footsteps of her soldier grandfather.

She speaks to eminent Canadian war historian Professor Margaret MacMillan and looks at where Australia has come to as a nation with its practice of remembrance. What role does it serve? Do we need to rethink it? Can empathy make a difference? One hundred years after the end of “the war to end all war”, do we take the responsibility of peace seriously enough?

In this emotional final episode of ‘From A Whisper To A Bang!’ Megan also asks: what would Harry make of all this?

Resources on this page include podcasts and other external content which can be useful in classroom settings. Below are links to some useful external sources:

- International Encyclopedia of the First World War (an international, especially German-and-French-focused website, but with excellent contributions by Australian scholars on matters of Australian interest).

- 14 Tagebuecher: Ethel Cooper (Australian) - in German, letters and diaries of an Australian stranded in Leipzig in 1914.

- SA Archives: Index of photographs of WW I soldiers, sailors and nurses.

- WW1 maps held by MacMaster University in Canada (lots of good stuff - this one is the pre-war British Ordnance Survery map of northern France). See also here for a greater variety of maps.

- William Westerman, "Change and continuity in combat: a statistical analysis of the officers of 5th Australian Infantry Battalion, 1914 to 1918", First World War Studies.

- German war memorials. There are some incredible photos here, can be useful for thinking about the different forms memorials took in different countries.