More than 103 years after she went missing, the first Allied and Royal Australian Navy (RAN) submarine lost in World War I has finally been found.  The latest of several searches off the coast of Papua New Guinea discovered the wreckage of AE1 in 300m of water, and the mystery of Australia’s first casualties in that conflict has been ‘solved’ according to Defence Minister Marise Payne in the official Defence media release today.

"It was … a significant tragedy felt by our nation and our allies."

HMAS AE1 was operated by a crew of 35, comprising three Royal Navy (RN) officers and 16 ratongs each from the RN and fledgling RAN when it went missing off the coast of the Duke of York Islands on September 1914. 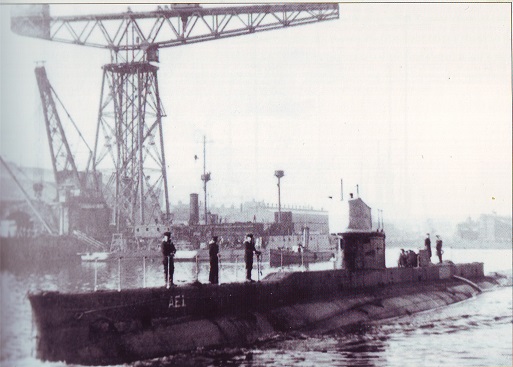 Their journey to Australia set records as the longest transit by submarines at that time. The two vessels sailed from England for Australia on 2 March 1914. The voyage was undertaken in three phases. The first phase took place under the escort of the Royal Navy cruiser HMS Eclipse which remained with the submarines until they reached Colombo.

En route, Eclipse alternately took the submarines in tow to reduce wear on their engines.  In spite of this precaution, AE2 suffered a serious defect while under her own power when she lost a propeller blade, necessitating repairs in Gibraltar between 6-9 March.

With repairs complete, the small convoy continued its passage via Malta and Port Said before AE2 threw a second propeller blade 20 miles outside of Aden. On this occasion repairs were carried out at sea with the assistance of Eclipse. The submarine was trimmed down by the bows and two anchors and cable from Eclipse were lowered over the front of AE2 to bring the stern of the boat out of the water. With the assistance of divers a replacement propeller was then fitted, the entire evolution taking two days. The three vessels then continued on to Colombo where they arrived on 9 April 1914.

Five days were spent in Colombo allowing the crews of the submarines to get some respite from the cramped and hot conditions in their respective boats. The passage through the Red Sea had been particularly demanding due to intense heat. Often the temperature inside the boats rose above 100 degrees F and in an attempt to cool AE2, Stoker ordered her casing to be painted white in an attempt to reflect the intense sunlight. (2) 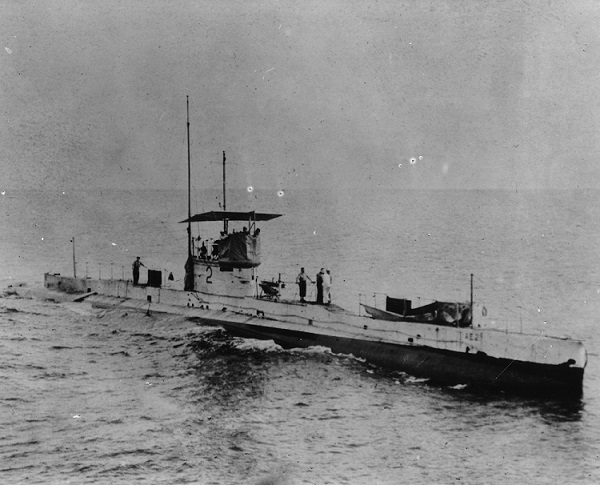 AE2 in tranist through the Red Sea, painted white to try to manage the temperature inside the hull (ANMM)

Both were to be lost in the course of their WW1 service in the RAN, an experience perhaps in part explaining the fact that the RAN was devoid of a submarine capability until the advent of the ‘O’ (Oberon Class) boats 50 years later.

While her sister ship the AE2 went down fighting in best Naval tradition in a combat action in support of the Gallipoli operation, most of its crew survived and its remains were found and remain largely intact.  The AE1 however, disappeared without trace very early in the war, in operations around New Guinea.

When war broke out in July 1914, the Navy was the only service with the means and capacity to mount offshore operations at short notice and a Marine Expeditionary Force was quickly assembled to neutralise German interests to Australia’s immediate north. 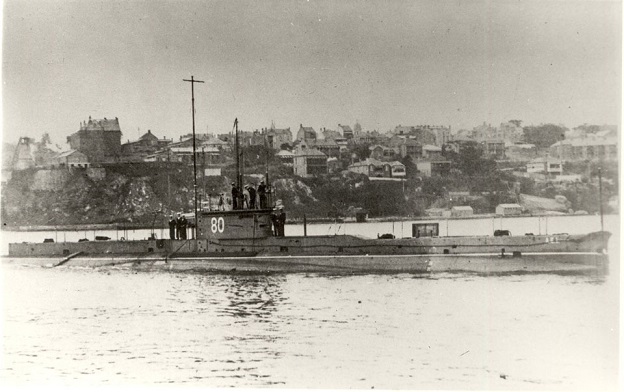 AE1 entering Cockatoo Island dockyard in Sydney Harbour during June 1914 with Balmain in the background (www.navy.org.au)

The AE1 and AE2 were among the RAN units that made up the Expeditionary Force.  Their crew comprised both Royal Navy (RN) and Royal Australian Navy (RAN) personnel.

The Australian Naval and Military Expedition Force (ANMEF) was tasked with the capture of German New Guinea at the outbreak of the war. The AE1’s involvement was as a patrol and reconnaissance craft.  On routine reconnaissance with the destroyer HMAS Parramatta on 14 September 1914, the submarine and the destroyer were to head from Herbertshohe in north-easterly and southerly directions respectively.

AE1 had a fault with the ‘starboard shaft’—it had several failings of the starboard engine clutch during the maiden voyage from the UK to Australia. What this meant was that AE1 could not go astern on the surface, and the starboard engine was completely unavailable when diving.(3)

Parramatta then proceeded independently in a southerly direction while AE1 advanced in a north-easterly direction. The weather was hazy and visibility was observed to be between 9 and 10 nautical miles, at times decreasing to 5 miles. Parramatta reported that AE1 was obscured by the haze for some time, as was the nearest land. Given these conditions, Parramatta’s commanding officer, Lieutenant William Warren, RAN, considered it advisable not to lose sight of the submarine for too long. 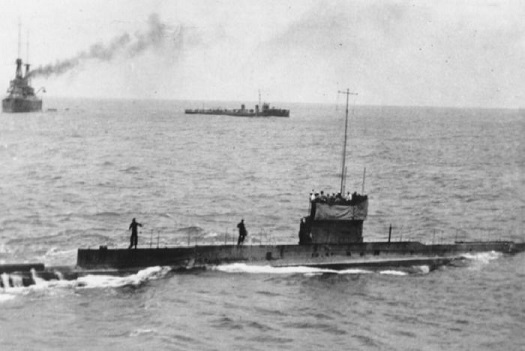 The last known image of the AE1 with HMAS Yarra and HMAS Australia in the background, taken on September 9, 1914. (http://www.navy.gov.au/hmas-ae1)

At 1230 Parramatta turned to the north-west and by 1430 hrsshe was close to AE1 when the submarine asked by signal: ‘What is the distance of visibility?’ Parramatta responded: ‘About 5 miles’. The Parramatta last sighted the AE1 at 1520 hrs and after altering course and being unable to locate the AE1, presumed she was heading back to port. It was to be the last time anyone saw the submarine.  Parramatta altered course and steamed in the direction she was last seen. No sign of AE1 was found and it was considered that she must have steamed back to harbour without informing Parramatta. Parramatta subsequently proceeded to the north-west and rounded Duke of York Island before heading to Credner Island, later anchoring off Herbertshohe at 1900 hrs.(3)

By 2000 hrs the submarine had not returned and Parramatta and her sister ship HMAS Yarra were ordered to search for the submarine. The light cruiser HMAS Sydney, on her way to the west coast, also received instructions to keep a lookout and later HMA Ships Encounter and Warrego also joined the search together with launches from Rabaul and Herbertshohe. No trace of AE1 was found, not even the tell-tale shimmer of escaping oil floating on the surface of the water.

Speculation included the notion that had the AE1 gone down in deep water, the pressure would have caused the hull to implode and release oil and other flotsam.  With none in evidence it was believed likely that it was in water less than 300m deep.

The loss of AE1 with all hands was the RAN’s first major tragedy.  It marred an otherwise successful operation to seize the German colonies in New Guinea and the South Pacific.  It is not known what caused AE1 to disappear without trace and the first of several new searches was conducted in 1976 to establish her location; but until 2017 none of these had been successful.

In December 2017 a new search, using the vessel Fugro Equator located the wreck of AE1 in 300 metres of water off the Duke of York Island group. 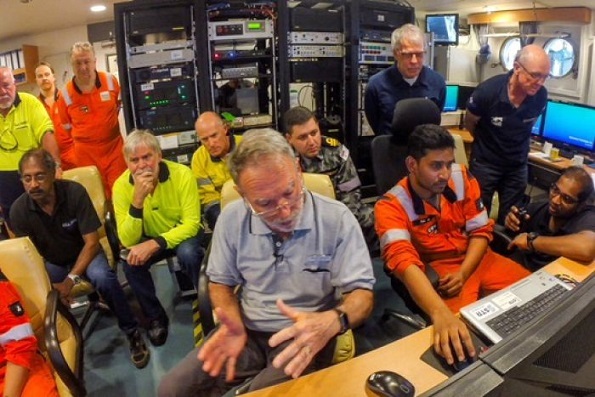 It took a team effort to find Australia's oldest submarine, the HMAS AE1, off the coast of the Duke of York Islands in Papua New Guinea.  Department of Defence

After the discovery, the crew on board the Furgro Equato took part in a commemorative service to remember the officers and sailors who lost their lives.

The Australian Government formally announced on 21 December 2017,  that the exact location of the wreck would not be publicly disclosed.

Eternal Father strong to save

Whose arm has bound the restless wave,

Who bids the mighty ocean deep

It's own appointed limits keep,

O hear us when we cry to Thee

For those in Peril on the sea.