A Christmas Truce of a Different Kind

Many people are familiar with the story of the Christmas Truce celebrated on the Western Front in the Great War. Today we bring you some snapshots of a different kind of truce. 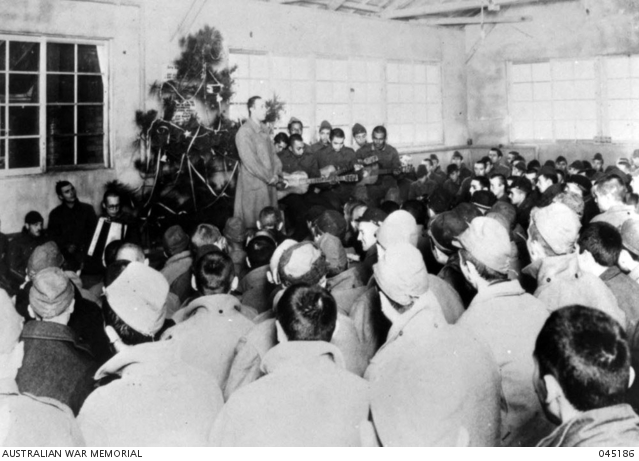 25 December 1944 - The Japanese guards at Camp 2 in Nagasaki decorated the camp for Christmas and allowed prisoners of war to celebrate the day. The Protestant service and Catholic Mass were combined for the day.

On the same day in Ohasi P.O.W. Camp, William Keith Edmonds, who had spent time in Changi Camp in Singapore and the Bicycle Camp in Batavia, also recorded his Christmas Day, which he referred to as "one of the happiest days" of his experience as a P.O.W.

The third Christmas in Japan, and by far the best. Everyone is happy, and in real Xmas spirit. It is now 4pm. Has been a cold day outside, but no snow. Inside it is nice and warm.

What a vast difference from the first Christmas, when all we had to eat was a small loaf of stale bread.

For breakfast today we had sweet beans, white rice and bread. In between then and tiffen, coffe and raisins, from our boxes, plus smoking many Chesterfields and Camel cigarettes. Recorded music through the amplifiers kept us in a happy mood.

We Protestants, held a nice little service at 10.30am, presided over by Dr. Tucker and Lieut. Humble. Dinner consisted of nasi-goring and meat monjews and an apple. We eight “Orphans” had a tea party during the afternoon, meat past sandwiches, washed down with apple cider, provided by Sparky and Fred, a very nice party, with music played from Schmidt’s records.

My thoughts are all of home today, everyone thinks it will be the last Christmas here, it must be. I am very glad of my photos, I can’t keep from looking at them today, and wondering what the folks are doing.

It is now 6pm I could hardly eat any tea, I am absolutely full. Tea consisted of white rice and thick stew with large meatballs in it, also a bowl of apple stew. There will be a little community singing tonight to finish off one of the happiest days I have spent as a P.O.W.

As those in Ohasi Camp predicted, it was the last Christmas they would spend in captivity and, for those who survived the following year, the next Christmas would be spent at home with the families that had so occupied their thoughts.