Don't forget to read Monday's article on the Battle of the Coral Sea here. 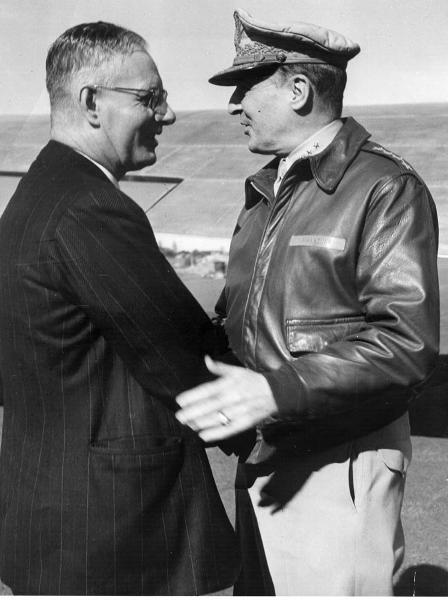 The battle of the Coral Sea was an important turning point, not just in the balance of power in the course of the Second World War but also represented a turning point in Australian foreign policy. The 1st few years of the war can be characterised as the time that Australia shifted its focus from its traditional dependence on Great Britain and looked increasingly favourably at an alliance with the United States of America. Although the decisive break occurred in 1942, Australia had been moving in this direction for decades.

From the beginnings of British settlement in 1788 until the dawn of the 20th Century, Australia was governed as 6 separate colonies but in the last decade of the 19th century, the movement to write and adopt a federal constitution gained strength and momentum. On January 1 1901, after a series of Conventions, referenda and passage through the British Parliament, the Commonwealth of Australia was establish as a federal, self governing Dominion of the British Empire. Initially, the new government operated under the understanding that foreign affairs were to be left to the imperial Parliament in London, this was the basis that Australia and the rest of the Empire entered both the Boer War and the First World War. It was also legal for the British Parliament to pass laws to override Australian laws.[i]

By the end of the war, however, things had begun to shift. The former British colonies of Canada, India, Australia, Newfoundland, New Zealand, and South Africa were all represented at the Paris Peace Conference that negotiated the Treaty of Versailles. This increased sense of independence continued through the 1920s as the Dominion governments became more and more autonomous of the United Kingdom. At the 1926 Imperial Conference between the Dominion Prime Ministers in London, it was recognised that the relationship between the Dominions and the United Kingdom had changed and what was known as the Balfour Declaration was issued.[ii] This declared that each of the Dominion governments were:

“... autonomous Communities within the British Empire, equal in status, in no way subordinate one to another in any aspect of their domestic or external affairs, though united by a common allegiance to the Crown, and freely associated as members of the British Commonwealth of Nations.”[iii]

The Balfour Declaration also started the practice of Commonwealth Dominions sending “High Commissioners” to each other to act as ambassadors.iv 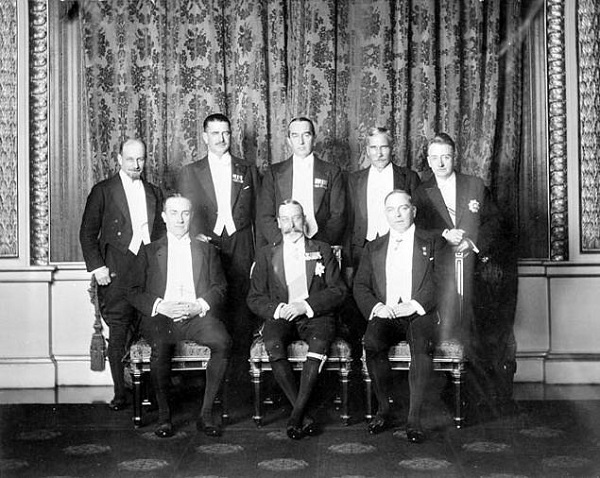 The King with his Prime Ministers at the 1926 Imperial Conference.
https://www.bac-lac.gc.ca/eng/CollectionSearch/Pages/record.aspx?app=fonandcol&IdNumber=3362798

Some were still unhappy with the settlement of the Balfour Declaration and wanted to go further. This culminated in 1930 over the appointment of the new Governor-General of Australia. The Labor Prime Minister James Scullin recommended Sir Isaac Isaacs (an Australian born Chief Justice), to replace the British Lord Stonehaven. This was a departure from previous practice whereby the British monarch, acting on the advice of the British prime minister, would offer the Australian prime minister a number of choices for the position. The King objected but Scullin was supported by the other Dominion Prime Ministers. Scullin argued that he was acting in line with the principles of the Balfour Declaration permitting Dominion governments to look after their own affairs, and insisted on the appointment of Isaacs. The King reluctantly agreed. When the Dominion Prime Ministers met in Westminster later that year, they agreed to put these principles into legislative effect to be known as the Statute of Westminster.[v]

In 1931 the Statute of Westminster was passed by the British Parliament. This legislation put a formal end to the United Kingdom's ability to overrule the legislation of a number of the Dominion Parliaments, notably Canada, New Zealand and Australia as well as recognising that these countries had separate and equal “Crowns” with the United Kingdom. Apart from Canada, this Statute did not come into force unless adopted by the respective Dominion Parliament.[vi] 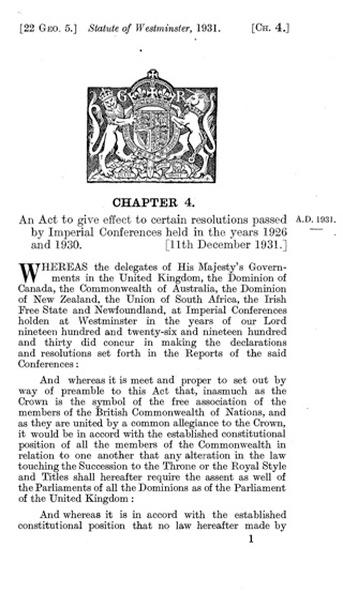 Throughout the 1930's, there was some debate in Australia over whether it was even necessary to adopt the Statute. Although the Labor Party was unequivocally in favour, The United Australia Party governments of Joseph Lyons and Robert Menzies were more reluctant. As Attorney-General, Menzies argued that adopting the Statute had only "relatively minor advantages" and would alter Australia's existing constitution existing constitutional arrangements "to a very trifling extent". He observed that "the real and administrative legislative independence of Australia has never been challenged since the Commonwealth was created", and said the primary reason for adopting the Statute was to bring Australia "into line uniformly with the other dominions" who had already adopted it.vii Although the UAP Government tabled the adoption bill for debate in 1937, they let it lapse and no further action was taken.[viii]

For the first few years of the Second World War, Australia dutifully deferred to British authority, with Prime Minister Menzies declaring that Australia was automatically at war with Germany as a result the British declaration of war. He also sent Australian forces to fight against the Germans and Italians in Greece and the Middle East. Australian airmen also contributed to the Battle of Britain. This attitude began to change as the Japanese threat grew. In October 1940, a Labor government led by John Curtin came to office wanting to shore up Australia's defences against Japan. Measures were taken to improve Australia's defences as war with Japan loomed in 1941, but these proved inadequate. In December 1941, the Australian Army in the Pacific comprised the 8th Division, most of which was stationed in Malaya, and eight partially trained and equipped divisions in Australia, including the 1st Armoured Division. The RAAF was equipped with 373 aircraft, most of which were obsolete trainers, and the RAN had three cruisers and two destroyers in Australian waters.[ix]

After war broke out in the Pacific against Japan it quickly became clear that Australia's best hope for defence was a strong alliance with the United States. In his New Years address, a few weeks after the attack on Pearl Harbour, Curtain wrote:

"Without any inhibitions of any kind, I make it quite clear that Australia looks to America, free of any pangs as to our traditional links or kinship with the United Kingdom."[x]

He also fought with the British Prime Minister Winston Churchill over the issue of where Australian forces would be deployed. Churchill wanted them to be deployed in Burma in early 1942 but Curtin insisted that they return to Australia to prepare for a domestic defence against the Japanese.[xi] The view in favour of the Americans was only compounded by the British failure at Singapore and the increasing military presence of the United States as demonstrated by the victory at the Battle of the Coral Sea in May 1942. At the Battle of the Coral Sea, a Japanese invasion fleet headed towards the Australian territory of Port Morseby in New Guinea was thwarted by a joint American-Australian fleet and stopped communication between Australia and the USA being cut off.

In October 1942 the Australian Parliament finally passed the Statute of Westminster Adoption Act to declare itself to be legislatively independent and of equal standing with the United Kingdom and the other Dominions. In order to emphasise the point, the act was backdated to September 3 1939 and included this preface:

“WHEREAS certain legal difficulties exist which have created doubts and caused delays in relation to certain Commonwealth legislation, and to certain regulations made thereunder, particularly in relation to the legislation enacted, and regulations made, for securing the public safety and defence of the Commonwealth of Australia, and for the more effectual prosecution of the war in which His Majesty the King is engaged:

AND WHEREAS those legal difficulties will be removed by the adoption by the Parliament of the Commonwealth of Australia of sections two, three, four, five and six of the Statute of Westminster, 1931, and by making such adoption have effect as from the commencement of the war between His Majesty the King and Germany:

BE it therefore enacted by the King’s Most Excellent Majesty, the Senate, and the House of Representatives of the Commonwealth of Australia, as follows:”[xii]

The way was now clear for Australia to drift away from its traditional reliance with Great Britain and to pursue closer ties with the United States of America. Curtin's decision to formally adopt the Statute of Westminster in late 1942 was also seen as a demonstration to the international community that Australia was an independent nation. 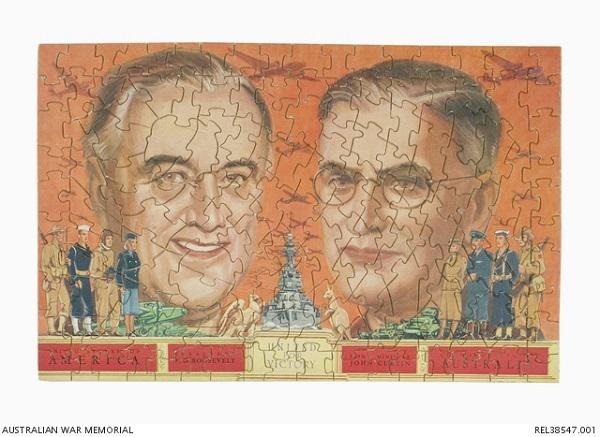 Jigsaw puzzle entitled 'United States of America President F D Roosevelt - United for Victory - Prime Minister John Curtin - Commonwealth of Australia' featuring a head portrait of each leader, with the men and equipment of each nation grouped to one side of each portrait, and the American eagle and Australian kangaroo placed centrally against a background of warships and bombers.
https://www.awm.gov.au/collection/C1225039

It should be noted that while the Statute of Westminster Adoption Act 1942 freed the Federal Parliament from British interference, it was not until the Australia Act 1986 that the State Parliaments were also freed from any potential interference.[xiv]

v Waugh, John. "An Australian in the Palace of the King-Emperor: James Scullin, George V and the Appointment of the First Australian-Born Governor-General" Federal Law Review, 39(2), 2011, 235–53.