In earlier features we examined the prelude to the Battle with the fall of France and then after the 20th June, the ‘kanalkampf’; attacks on British shipping and ports in the North Sea and English Channel.

On the 13th August the Luftwaffe commenced the 2nd phase of the Battle. It launched ‘Adlertag’ or ‘Eagle Day’, unleashing its main effort; the destruction of the RAF and its supporting infrastructure including the ‘Chain Home’ radar stations that provided the RAF fighter controllers with the all-important early warning enabling them to get the defending fighters in the air, at altitude, ready to engage the incoming Luftwaffe attackers. 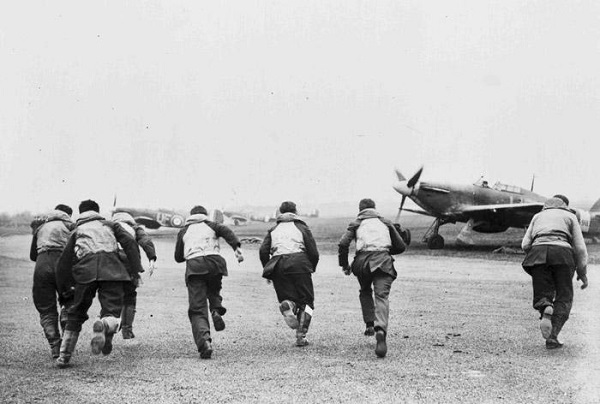 The iconic ‘scramble’, as Hurricane pilots race to their aircraft to intercept incoming raiders

Airfields in England’s south east bore the brunt of this aerial assault. Names such as Hawkinge, Manston, Debden, Tangmere and Biggin Hill among many others representing the front line of the RAF’s defences. The ‘front line’ was largely (but not exclusively) in 11 Group’s allocated sector, commanded by Air Vice Marshall Sir Keith Park, a straight-talking New Zealander.

This posed a double-barrelled threat because as the 11 Group fighters were engaged, their airfields were being bombed. A major source of tension was the 12 Group Commander, Air Vice Marshall Trafford Leigh Mallory’s conviction with the concept of ‘Big Wings’ which, while good in theory, took too long to assemble to be able to come to the aid of 11 Groups cover their airfields in time to prevent German attacks. 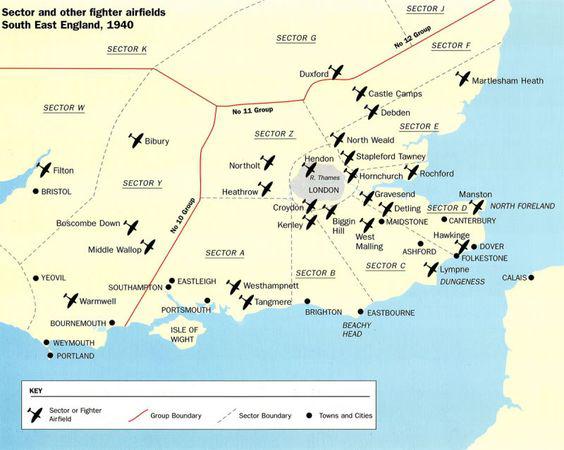 The Luftwaffe was well aware that their ‘loiter’ time over England’s south east was limited to about 30 minutes. Their aim was to draw the RAF fighters into battle with the Luftwaffe’s Messerschmitt Bf 109 fighters, while the bomber force destroyed airfields and attacked aircraft factories that were in range. The much-vaunted Junkers 87 ‘Stuka’ dive bombers were directed against the radar stations.

Flying Officer Richard Lindsay Glyde, DFC was born in Perth, Australia on 29th January 1914. He joined the RAAF in 1935 and did most of his flying training at Point Cook. However a medical examination revealed a condition that prevented his continuing his training and he left the service.

After remedial treatment Glyde went to England at his own expense and was successful in obtaining a short service commission in the RAF commencing in June 1937.

On 24th October 1938 he was posted to No. 87 Squadron at Debden and a year later, went to France with the Squadron at the outbreak of war. On 14th November 1939 Glyde and 87's CO, S/Ldr. WE Coope, in two Hurricanes, made a forced-landing at DePanne in Belgium and were interned. They escaped on the 24th November and, with the help of the British Consulate, made their way back to France in civilian clothes and re-joined their unit

On 19th May 1940 Glyde destroyed a Bf109, probably another and shared a Hs126 reconnaissance aircraft. He was awarded the DFC, being then credited with four enemy aircraft destroyed.

Glyde destroyed a Bf110 and damaged another on 11th July south of Portland and returned to Exeter damaged by return fire.

On 13th August Glyde shared a Ju88 and a He111 both destroyed . His Hurricane, P3387, was hit by return fire from another He111 engaged south of Selsey Bill. His aircraft crashed into the sea and Glyde was reported 'Missing'.

After learning to fly at the local Maylands aerodrome, Cale was provisionally accepted by an RAAF Board for an RAF short service commission and sailed for England on February 2nd 1939. With his elementary flying successfully completed, Cale was granted his commission in May 1939. 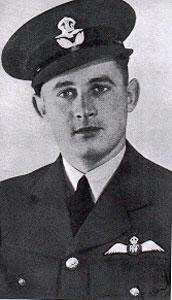 After completing his flying training, he joined No. 266 Squadron at Sutton Bridge in early November.

In July 1940 he married Muriel Joan Perry at Paddington.

On August 15th 1940 Cale was shot down by Bf109's over Maidstone. He baled out but landed in the River Medway, his body being recovered from the river the following day. His Spitfire, N3168, crashed in flames on the bank of the Medway at Teston.

He is buried in Westminster City Cemetery, Ealing, close to his wife's home.

In England’s North East, on the15th August, a major attack from Luftflotte 5 in Norway was mounted as part of a coordinated effort to saturate the British defences. Without a fighter escort, they flew straight into 12 Group and their losses were such that they never attempted a repeat performance.

As Dowding pointed out to the Minister of Air, if it was to win, the RAF would have to shoot the Luftwaffe down at the rate of four to one.

The 18th August 1940 has been described as “The Hardest Day” when the RAF suffered disproportionately high losses of aircraft caught on the ground, and things began to look bleak indeed. 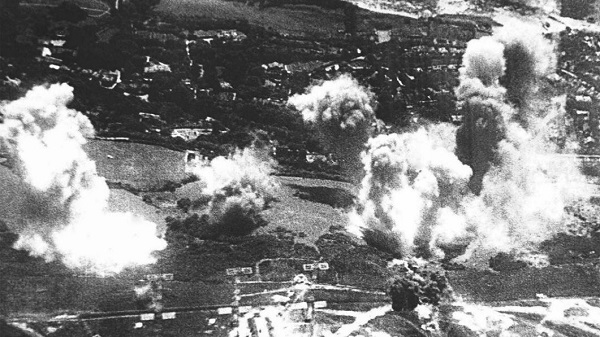 On the 20th August, despite the Battle being far from won, British Prime Minister, Winston Churchill, acknowledged the enormous gratitude of the Nation to British & Allied aircrew when he said ”Never in the field of human conflict has so much been owed by so many to so few.”

Then, over the space of a few days a classic example of how a string of incidents connected to shape the fortunes of war, unfolded. It also highlights the consequences of changing strategy for the wrong reasons.

On the night of the 24 August, during a night bombing of Britain, a lost German bomber formation inadvertently jettisoned their bombs over London.

The following night, on the 25 August, in retaliation for the apparently deliberate bombing of London, the RAF launched their first bombing raid on Berlin. It was largely ineffectual, but it enraged Hitler and he directed that the Luftwaffes’ main effort thereafter be directed against London.

This is viewed by many as a turning point in the Battle. Although, on the 31 August, Fighter Command suffered its heaviest losses to date, as the Luftwaffe’s bombers turned their attention on London in daylight, the escorting fighters were at the limit of their range, and the bombers were at last within reach of 12 Group’s aircraft.

On the same day another key asset joined the fray. No. 303 (Polish) Squadron– based at RAF Northolt – became operational followed shortly after by another, No.302 Squadron, providing a major boost of well-trained and very experienced pilots who were to quickly make their mark as aggressive and effective. No. 303 Squadron was to become the highest scoring Squadron in the Battle, while suffering the lowest loss rates.

As the bombing of London intensified two more Australians were lost in combat, both in the course of one of the heaviest raids to date, on the 7th September.

Flight Lieutenant Richard ‘Dickie’ Reynell was born in Reynella, South Australia, on the 12th August 1912. His father, Lieutenant Colonel Carew Reynell, was killed commanding the 9th Light Horse Regiment in an attack on Hill 60 at Gallipoli on 28th August 1915. After schooling at Adelaide’s St Peters Collegiate School, ‘Dickie’ Reynell travelled to the UK to study Agriculture at Oxford University in 1929.

He joined the Oxford University Air Squadron, where he soon discovered he was in his element and excelled at his new craft. He was granted a short service commission in the RAF and after further training he joined No. 43 Squadron at Tangmere in 1932. 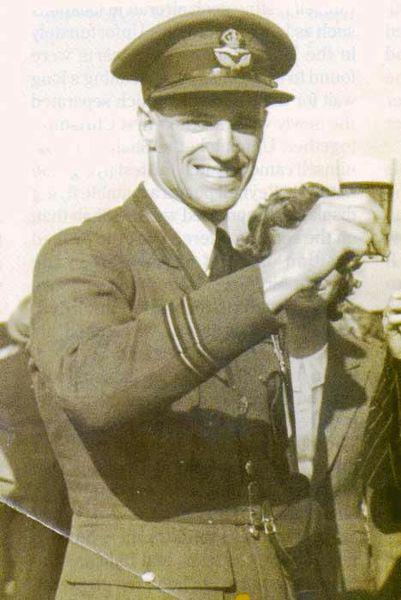 By 1938, he had married and become a Test Pilot with the Hawker Aircraft Company.

In July 1940 he was detached with his old unit, No. 43 Squadron, to evaluate the Hurricane in combat. He claimed a Bf 109 on 2 September but on the 7th was recalled to Hawker to replace a Test Pilot who had been killed. Dickie elected to complete the day’s flying program and that after noon leading a Flight as part of the 12 Squadron aircraft, they intercepted over 100 German aircraft.

Reynell’s Hurricane was seen to break up and although he apparently bailed out his parachute did not open and he was killed. He was 28 years old.

At about the same time that day, another Australian, the highest scoring Australian pilot of the Battle, Pat Hughes joined the growing list of Australian losses.

Paterson (‘Pat’) Clarence Hughes had been born in Cooma on 19 September 1917. He enlisted in the RAAF as an air cadet in January 1936. A year later and he was on his way to the UK having accepted the offer of a short service commission in the RAF.

By late 1939 he had been appointed a Flight Commander with No. 234 Squadron which were later equipped with Spitfires. Soon after met his wife-to-be Kathleen Brodrick.

Hughes opened the Squadron’s account on 8th July. Developing a very aggressive flying style he closed to within 30 yards to fire at his targets. It worked, but it was not without risk.

He married Kathleen on 1 August at Bodmin Cornwall with just official witnesses and Hughes’ dog ‘Butch’ in attendance. 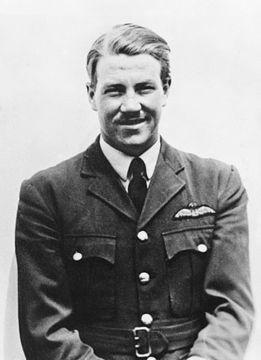 He started to accumulate victories at a rapid rate with ‘doubles’ credited on several days in August making him a double ‘Ace’. By the 6th September he had a total of 13 victories.

Late on the 7th , No. 234 Squadron, which coincidentally shared the base with No. 236 Squadron with whom John Kennedy and Stuart Walch had flown, took on a force of 60 raiders. Hughes’ aircraft was seen to close on a Dornier bomber from which a large piece detached and apparently struck Hughes’ aircraft. Others claim he rammed the German, but either way his aircraft broke up and although Hughes apparently bailed out, his parachute failed to open.

His wife of only five weeks was inconsolable and his dog Butch ran away never to be seen again.

The Battle of Britain, unbeknown to all at the time, was rapidly approaching its culminating point.