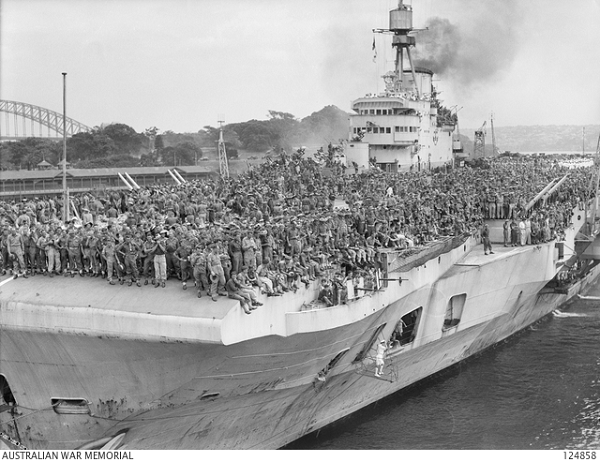 The excitement and relief of the Japanese surrender came with a new logistical challenge for Australia - the discharge and repatriation of nearly 600,000 men and women stationed in various locations across the Pacific and as far away as Japan and Britain.

The Australian Government, having learnt from World War One, preemptively established the Department of Post-War Reconstruction in late 1942. By 1944, some 65,000 servicemen had been released from active duty into other areas of the war effort in preparation for the eventual demobilisation.[i] In 1945, ‘long service personnel’ (those who had served full time for five years including at least two abroad) could elect to be discharged.[ii] By March, the government had a full-scale ‘Demobilisation of the Australian Defence Forces’ plan in place.[iii]

On the 16th of August 1945, the plan for demobilisation, or ‘demob’ as it was colloquially known, was immediately put into action. A points system dictated which soldiers were to be prioritised for discharge. Two points were awarded to each year of a soldier’s service based on their age at enlistment, and a further point was awarded for each month of service. Men with dependants received an extra point per month. For women, three points were awarded for each year of service, and one for each month. Those with dependants were prioritised above all others, while those who had married prior to the war could apply to be discharged early on compassionate grounds. The rank, number of dependants and location of service for each individual was not a factor in the points system. The rate of discharge was set at 3,000 per day.[iv]

For example, Captain Balfour-Ogilvy would have received 82 points in August 1945. According to his service record, he was single and had no dependants

The repatriation of prisoners of war, most of which were malnourished and diseased, was top priority. By September 1945, most prisoners held in Singapore, Java and Sumatra had returned to Australia, and over half were on their way home from Bangkok. Those held in Japan and Korea were almost all home by the end of the year.[v] Over 14,000 prisoners of war had been repatriated by the middle of 1947.[vi]

Despite conscious efforts from the Australian government to enlist the services of extra British troopships and aircraft carriers, repatriation was remarkably slow for some. Many of the men serving on the more remote islands of the Pacific such as Morotai, Bougainville and the Dutch East Indies had to wait years before they returned to Australia. Competition for shipping with the British and American armies was one contributing factor, as well as the need for servicemen to help in civilian administration and the guarding and disarming of Japanese soldiers.

To pass the time, classes were run by soldiers with special civilian occupations. There were ‘elective’ classes like ballroom dancing and hydraulic engineering, as well as basic English and arithmetic courses to reacquaint the men with the skills needed for civilian life.

A protest march involving 4,500 men on the island of Morotai was conducted in December of 1945, urging the government to ‘GET US HOME FOR CHRISTMAS’.[vii] Instead, it was the Prime Minister Ben Chifley who spent Christmas with the troops, experiencing their frustration first hand when his plane’s fuel tank was filled with the anti-malarial drug Atebrin in a sign of protest, keeping him grounded for an additional 48 hours.[viii]

By June 1947, 522,261 servicemen and women had been discharged.[ix] The Department of Post-War Reconstruction continued to work alongside other organisations such as the Repatriation Department, Salvation Army and Red Cross in repatriation efforts, issuing war pensions, supplementing wages, establishing land and housing for veterans and keeping Repat Hospitals running.[x] Robert Menzies deemed the operation a success and abolished the department upon election in 1949.[xi] The Repatriation Department continued to function until its metamorphosis into the Department of Veterans Affairs in 1976.[xii] 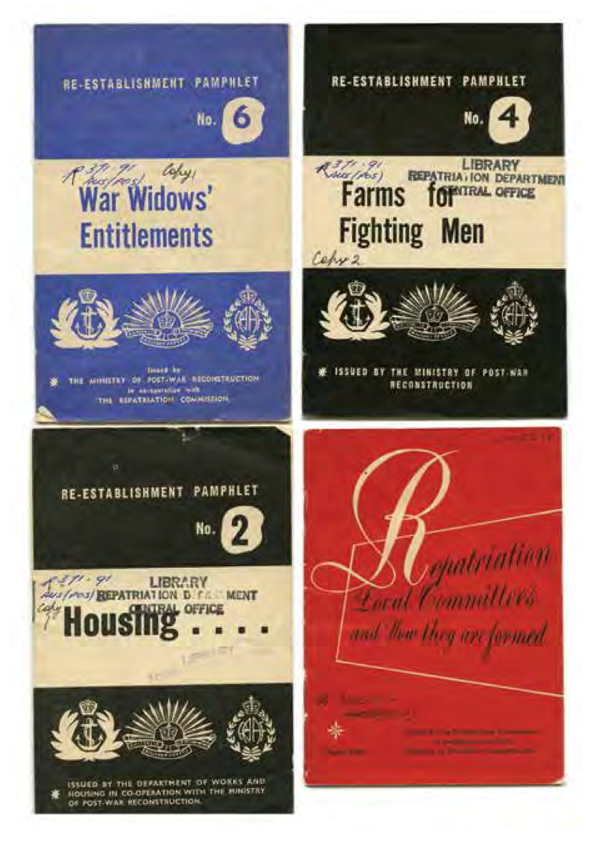 Many veterans merged back into civilian life seamlessly, with 94,000 having completed a university course by 1951.[xiii] Many others took up government funded apprenticeships or settled on subsidised farms. A great many more veterans struggled in their repatriation, and developed diseases like latent tuberculosis and debilitating mental disorders such as post traumatic stress disorder. Groups like the Ex-POW Association of Australia were established to help assist those affected in their repatriation, although a vast majority suffered in silence.

In the wake of the 75th anniversary of VP Day, the demob effort comes as a reminder that we must remember not only those who lost their lives in the Second World War, but also those brave Australians who returned, scarred mentally and physically, continuing to survive in the aftermath of such atrocity.