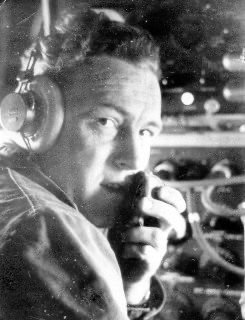 “…holes appeared in the hull, the sun came steaming through these holes and it was rather like being in a colander…the second aircraft…chopped our starboard wing off completely.”

Corporal Andrew Benvie Ireland and six other crew members were aboard Empire flying boat A.18-10 at 9am on March 3rd 1942, moored a mile from shore.[i] They were refuelling before a flight to Timor to rescue stranded soldiers.[ii]

The sirens sounded from the mainland as Japanese Zeros began to strafe the vessels in Roebuck Bay. Bullets pierced the flying boat’s hull and set fuel tanks alight. The crew jumped overboard, abandoning the sinking plane, but Corporal Ireland did not follow suit. Instead, he made his way through the smouldering flight d eck to the rubber dinghy. He was wounded and suffered severe scorching to his chest and face as he desperately tried to inflate the dinghy.

As the Japanese launched their third attack, the 1,500 gallon petrol tank exploded, launching Corporal Ireland from the plane and into the shark-infested bay. Miraculously, he retained his grip on the dinghy, and managed to inflate it whilst treading water. He dragged himself inside, and paddled frantically to pick up his crew. He also rescued four Dutchmen and an injured Dutchwoman, all of whom would have almost certainly drowned or been taken by sharks “but for Ireland’s courage and presence of mind.”[iii] His actions earned him a British Empire Medal.

The official recommendation for his award reads: “For gallant conduct on hazardous work at Broome.” Ireland served in the RAAF across multiple units including No. 33 and No. 41 Squadrons until he was discharged on March 28th, 1946.

Listen to Corporal Ireland’s personal reflections of his conduct during the attack on Broome, complied by the Broome History Society and Museum: