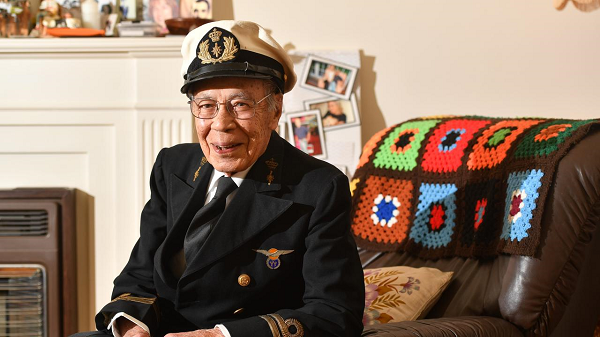 Wartime for Hans de Vries had all the drama and romance of a Hollywood movie.

This unlikely but true story sees Hans make a perilous escape from his invaded homeland, mingle with film stars in San Francisco, pilot a B-25 bomber on operations against the Japanese, and celebrated victory by flying under the Sydney Harbour Bridge.

World War II in the Pacific began with a series of coordinated, simultaneous attacks conducted by the Imperial Japanese Navy and Army, on 7th December 1941.

Pearl Harbour, Clark Field in the Philippines, Hong Kong and Kota Baru on the North East coast of the Malayan Peninsula were the targets of this surprise offensive.

While its most well-known consequence was to bring the United States into the war, it quickly impacted Indochina (controlled by Vichy France, notionally part of the Axis given its alignment with Nazi Germany), the British Empire (Malaya and Singapore) and the Netherlands’ East Indies.

These country names will likely not mean anything to people born after 1980. But the events of 1941-2 shook the fundamentals of the geopolitical status quo as the Imperial Japanese Forces cut a swathe through the largely unprepared Allied colonial outposts.

The Dutch East Indies proved to be unlikely but stalwart allies of Australia. An Australian Task Force (known as ‘Blackforce’ after its Commander Brigadier Arthur Blackburn) had been sent on a scandalously futile mission to stem the Japanese advance through Java, lacking even their own weapons and ammunition. Unsupported and under-equipped (their equipment and ammunition was on another ship in the convoy from which they had been diverted) they gave a very creditable account of themselves having armed themselves with weapons and ammunition intended for the Dutch shipped from the USA. In the end, with the promised evacuation operation failing to materialise, the men all became captives of the Japanese. They were losses Australia cold ill-afford.

The Dutch were the intended recipients of a great deal of war materiel supplied by the USA. Dutch personnel and equipment (notably Douglas A20 Boston light bombers and North American B-25 Mitchell Medium Bombers) found their way to Australia and one group were fully integrated into the RAAF. The B25 was one of the best medium bombers of WW2 and served in every theatre of war with almost all Allied Air Forces. 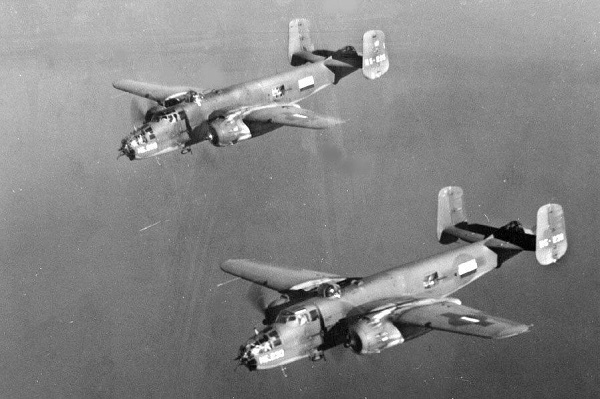 Hans had learned to fly in the Dutch East Indies – now Indonesia – where his father, Herman, was accounts manager for a shipping company. He had a light aircraft licence at 17, a year before being allowed to drive a car.

The young Hans could trace his ancestry to the Dutch settlers and the Sundanese people of Java. There were servants and chauffeurs, tennis parties and dances. When he was 15, Hans won a ballroom dancing title, demonstrating skills that would stand him in good stead later in his eventful war.

Hans’ life and that of the entire Netherlands’ East Indies, established as a Dutch Colony in the 1600s, was rudely interrupted by the Japanese invasion of 1942. As a sergeant pilot in the Royal Netherlands Naval Air Force, he was ordered to leave for Australia.

His contingent was despatched, in secret, aboard three ships to escape and join the Allied forces. Two of the ships were torpedoed, but Hans’ vessel, the Boissevain, crept quietly by night through the Japanese fleet in the narrow sea lane between West Java and Sumatra (the Sunda Strait - scene of a Naval Battle resulting in the loss of HMAS Perth and USS Houston) and reached Fremantle.

On arrival, they were put on a train for travel right across the country to Awaba, near Lake Macquarie in NSW, for RAAF training.

“It took us three days and, because I’m quite small, I slept up in the luggage rack,” Hans said. “I learnt a lot in the RAAF – especially about swearing. I’d studied English back home in high school, but I didn’t know that everything in Australia was ‘effing this’ and ‘effing that’.”

Then came travel of a more exotic kind: he crossed the Pacific on the liner Mariposa for operational bomber instruction at Jackson, Mississippi.

The plan was that the Dutch B-25s would form a Netherlands East Indies / RAAF composite squadron. The RAAF was equipping its No. 2 Squadron with B-25s so the aircraft and supply chain were compatible.

From Jackson, Hans flew to San Francisco, so his B-25 Mitchell could undergo modification for the long flight to Australia. On a free evening, he went to the Stage Door Canteen, a military recreation centre where celebrities made morale-boosting appearances.

He spotted Rita Hayworth, widely regarded as the number one “GI pin-up”, and renowned dancer. Undaunted, the Javanese ballroom champion was soon sashaying across the dance floor with Fred Astaire’s favourite partner. 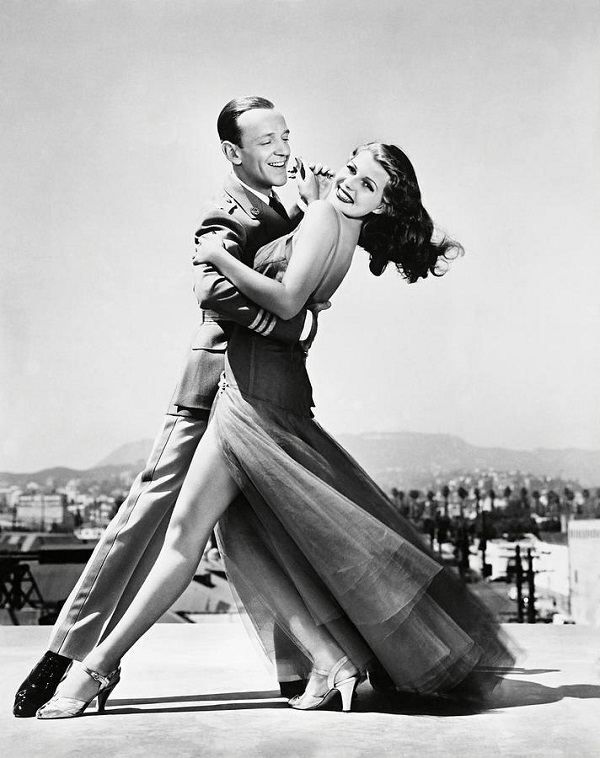 Then a broad-shouldered man wearing the insignia of a US Army corporal came up to welcome the smooth-moving Dutch flyer. It was an actor named Ronald Reagan, shooting a movie called “This Is The Army”, in which he played the role of Johnny Jones. Hans recalled the scene: “I was in Dutch officer’s uniform, and the first thing he said to me was ‘This isn’t my normal uniform. In real life, I’m a captain in the army’.” 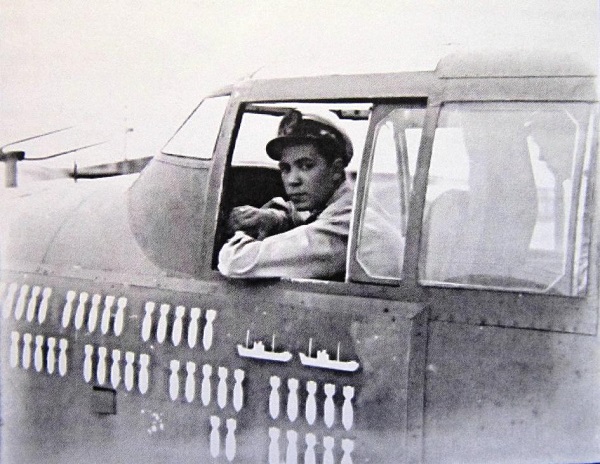 Hans de Vries at the controls of his B25. The markings indicate missions flown and successful strikes against enemy ships. Nigel Stark / de Vries family

The realities of operations were brutal. Flights were long and by definition mainly over water. Even technical problems over Australian territory were hazardous with a dearth of emergency landing options and large distances to traverse. In the target area there was an ever-present risk from Japanese defences, either fighters, flack or both. Downed crews might hope for retrieval by a comprehensive air sea rescue system headed by PBY Catalina flying boats, however escaping from a crippled aircraft over Japanese territory was most often a death sentence, with aircrew generally being summarily executed by beheading by their captors. 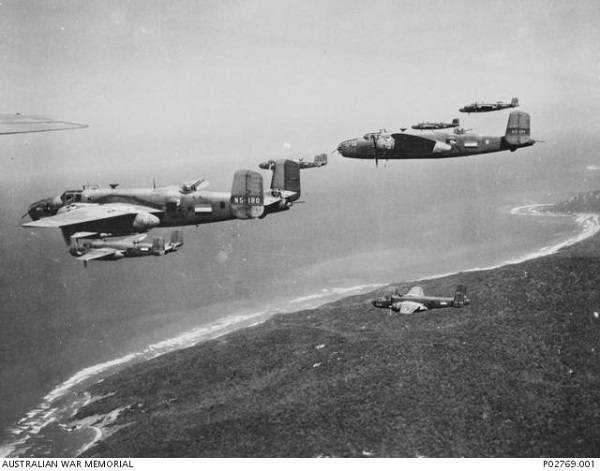 As the war progressed, the B-25’s Hans and his colleagues were flying were progressively modified for the specialist attacks they were undertaking. ‘Skip Bombing’ was found to be the most effective technique against enemy shipping. The technique had been perfected in New Guinea, against an old wreck off Port Moresby. The concept of ‘skip-bombing’ was a low, flat approach to drop bombs short of the target in such a way that the bombs bounced off the water and struck nose first against the hull or superstructure of the target ship, where they detonated. The major disadvantage was heavy fire from the target; attacking low and fast meant there was no margin for error or mishap. The early B-25s lacked sufficient forward firing armament to suppress this fire. Later versions of nearly all Mitchells featured local modifications to increase the number of fixed forward firing .50 cal machine guns. As many as eight could be controlled by the pilot and co-pilot.

For Hans, his service culminated in selection for a victory fly-over in Sydney. A crewman dared him to dive under the harbour bridge. After all those low-level attacks on ships, it was a challenge he accomplished with panache. He wasn’t the only one to pull off this ‘stunt’; the most famous being Sqn Ldr Peter Isaacson in Lancaster Q for ‘Queenie’ in 1943. It is also worthy of note that three Dutch colleagues, including Gus Winckel had also preceded him in 1942, causing a major furore at the time!

One of his final missions was a return to Java, where he rescued his parents, two sisters and young brother from an internment camp. 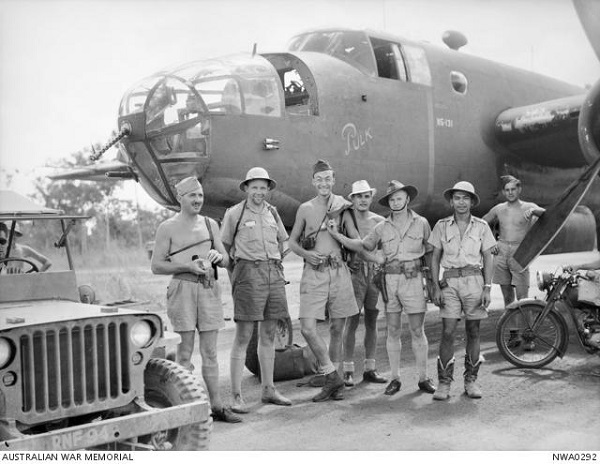 Members of No. 18 Squadron pose with their aircraft ‘Pulk’ at Batchelor Field in the NT. Image AWM NWA0292

Back in Australia, Flight Lieutenant de Vries married Brenda de Gruchy – a “beautiful Australian girl” he met in Queensland. He became an Australian citizen, and found work as a geologist, a dairy farmer and as a computer programmer.

He cut a dashing figure in Anzac Day commemorations. “My pilot’s uniform still fits me,” he said in 2018. “I just wish I could really use it again.”

On 18th April 2017, Hans and Fred Pelder Jnr (son of an 18 Sqn pilot) were presented with medallions by a grateful Netherlands Government in recognition of their WW2 service. The ceremony was held at the nose of a B25 being restored in Adelaide, depicting an 18 Squadron aircraft, named ‘Pulk’ – see image above for the original - at Parafield Airport. Hans was wearing his WW2 uniform, looking impeccable! 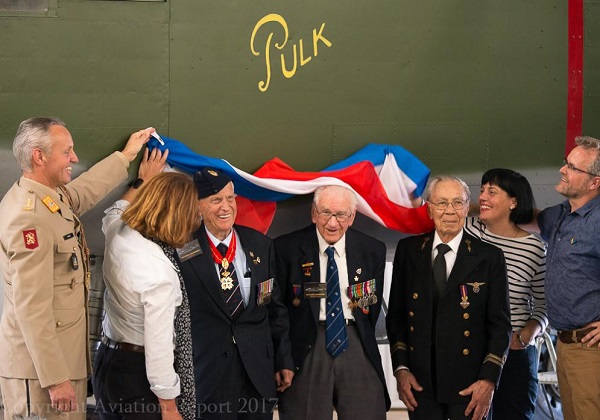