A lone boat sailed into Williams' Pier at Gallipoli on 13 November 1915.[i] Out stepped Field Marshal Lord Kitchener, Secretary of State for War. His arrival sent the men on the dock into a frenzy. They came running from everywhere to surround Kitchener as he walked slowly up the pier. There were no officers leading him away from the crowd of soldiers, and Kitchener made no motion to speak to his generals. Instead, he addressed the mob directly:

Kitchener spent two days consulting officers and surveying the landsca pe before deciding that little progress could be made against the Turks with the current diminished force and lack of artillery, not to mention the horrid winter conditions. The British War Cabinet approved Kitchener’s recommendation of withdrawal on 8 December 1915.[iii]

The troops were told they were headed to Lemnos for a rest,[iv] but by December 13th, word of the evacuation had spread throughout the ranks. Reactions were ambivalent. The men were of course thrilled to escape the harsh Gallipoli winter, which brought with it chilling fronts of rain, freezing snowfalls and deadly wind chill. In early November, 16,000 troops suffering from frostbite and hypothermia were evacuated.[v] The mud in the trenches froze over, and a huge storm at the end of the month caused severe flooding, resulting in copious casualties. 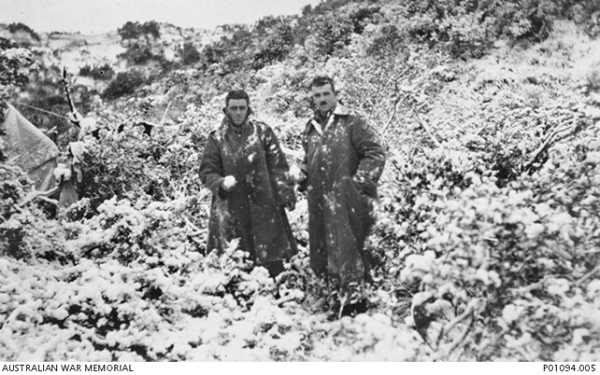 Captain Webster and George Watson stand in the snow holding snowballs after a November blizzard at Gallipoli
AWM P01094.005

Conversely, the thought of leaving behind their dead comrades filled the men with sorrow. In the days prior to evacuation, men “erect[ed] new crosses” and “tenderly tidied-up” the graves of their fallen friends.[vi] “I hope they won’t hear us marching down the [valley],” said one soldier to General Birdwood. 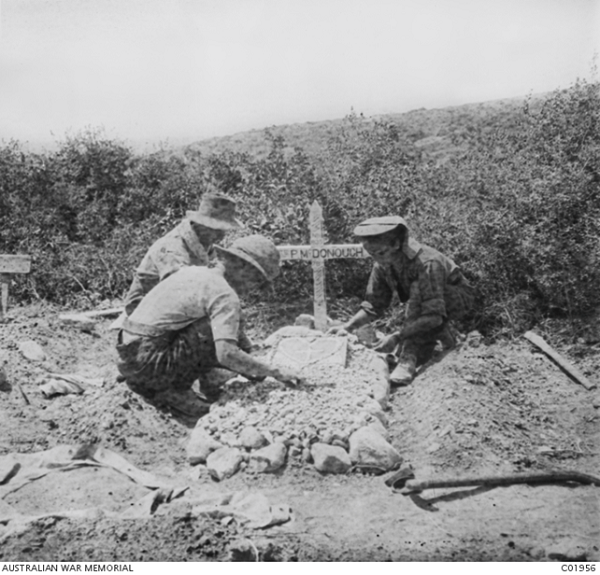 Three soldiers in a cemetery on the Gallipoli Peninsula tend the grave of 835 Private Patrick Michael McDonough, 7th Battalion, who was killed in action on 5 July 1915
AWM C01956

After the famously chaotic landing, it was the view of many in the War Cabinet that the evacuation would result in heavy casualties. Some British generals believed half the Allied force would be lost.[vii] Australian Lieutenant Colonel Cyril Brudenell White proved them wrong by devising a plan so successful that no men were killed during the evacuation.[viii]

Lieutenant Colonel White had in fact anticipated and begun planning for an evacuation some months before official orders were handed down. His plan relied on convincing the Turkish army that Allied operations were continuing as normal. Alerting the Turks to the withdrawal would have devastating consequences, allowing them to bombard important beach and dock areas, halting the evacuation and catching the Allies at their most vulnerable.

Some commentators have suggested that the Turks were aware of an evacuation, and were content to let the Allied forces leave. General consensus considers this interpretation untrue.[ix] The Turkish forces would not have wanted Allied troops to safely withdraw, only to attack the Ottoman Empire elsewhere, and they certainly would have taken the chance to attack a weakened force had they been aware an evacuation was in place.

‘Silent stunts’ began in late November when artillery fire and sniping from Anzac lines stopped. It was hoped that the silence would be interpreted by the Turks as an army preparing for winter rather than the beginning of a withdrawal. The initial stage of evacuation continued in a similar fashion, with men and equipment removed in a manner consistent with a garrison preparing for a winter defence.

The intermediate stage of evacuation involved the gradual removal of supplies, ammunition, horses and soldiers, to the point where the number of Anzac soldiers left at Gallipoli was enough to defend against a major Turkish attack just for one week. The Anzac garrison fell from 41,000 to 26,000 troops during the first two stages of evacuation.[x]

The final stage of the evacuation was conducted at night from 18-20 December 1915. Only 20,277 soldiers remained at Gallipoli at this point. Mule columns lead by men from the Indian Mule Corps transported equipment to Williams' Pier throughout the night. “My goodness,” thought one Australian soldier, “if the Turks don't see all this as it goes along they must be blind”.[xi] The men of the Mule Corps were, however, incredibly skilled trainers, and kept their animals completely silent as they carried their heavy loads down to the pier.

The Anzacs did their best sustain the appearance of normality. On December 17, a now famous cricket match was held on ‘Shell Green’, the only flat piece of land accessible at Gallipoli. Intended as a diversionary tactic, it had to be abandoned when Turkish shells detonated nearby. 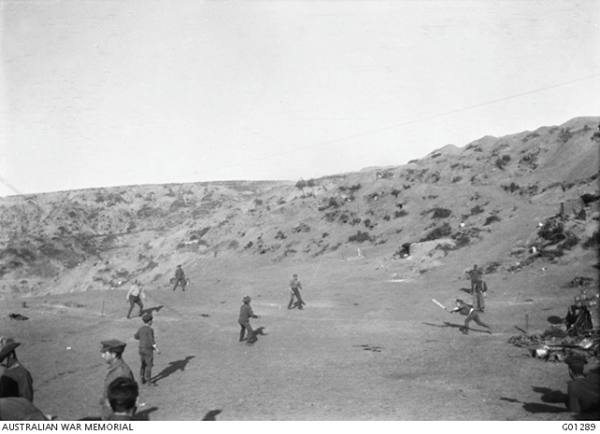 Cricket match at Shell Green. Major George Macarthur Onslow of the Light Horse is batting, about to be caught out.
Photographed by Charles Edwin Woodrow Bean, AWM G01289

Another ruse, invented by Lance Corporal William Charles Scurry of 7th Battalion with the help of Private Alfred Hughes Lawrence, was the ‘drip-rifle’. Made by placing two kerosene tins atop one and other, the top tin was filled with water and the bottom attached to the trigger of a rifle. As the men left their trenches for the last time, small holes were punched in the top tin. With each drip, the bottom tin increased in weight, eventually putting enough pressure on the trigger to fire a round. The men the Turks believed were firing at them had in fact left the trenches 20 minutes earlier. 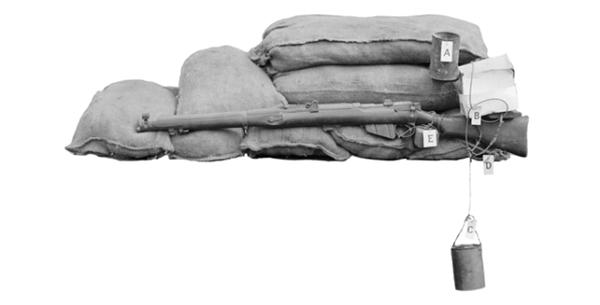 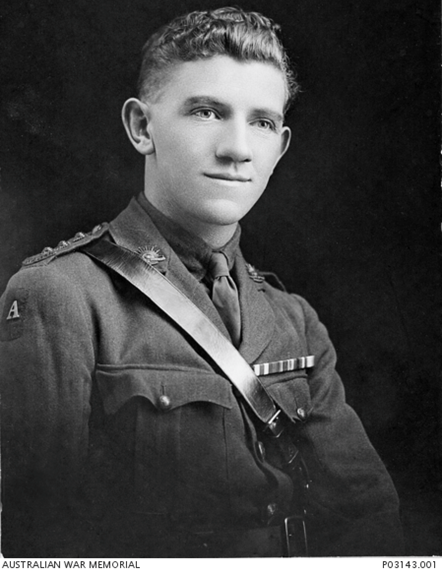 Scurry was awarded the Distinguished Conduct Medal for his “conspicuous ability and good work…in regard to a device for firing a rifle automatically”.[xii] In September 1916 he sustained a serious eye injury that considerably reduced his vision. He was awarded the Military Cross in June 1917. Scurry survived the war and worked as an orchardist in Silvan, Victoria until his death in December 1963.

The final day of evacuation was filled with constant activity. Boats packed with empty crates continued to arrive at Williams' Pier to keep up the illusion of winner preparation, while in the afternoon the British started a feint attack at Helles to distract Turkish forces.[xiii] At Dusk, the remaining men filed out of the trenches at North Beach. Small rear parties remained, firing the occasional shot and making enough noise to convince the Turks the entire garrison was still there.[xiv] By 4:00am, only a handful of men remained. At 4:10am, having waited long enough for any rear party stragglers, Colonel John Paton declared the evacuation complete.[xv] The last troopship sailed away as the men watched North Beach, their home for nearly 8 months, fade into the distance.

No Allied operation in the entire First World War was more successful than the evacuation of Gallipoli.[xvi] Over the course of three weeks, approximately 150,000 men, 2,000 horses, 400 guns and a huge amount of equipment and supplies were withdrawn without a casualty;[xvii] a triumph in planning and execution.