In 1912, Mr Donald Mackinnon donated a trophy to the Prahran and South Yarra Bicycle Club, of which he was the President.[i] The Mackinnon Cup, as the trophy became known, was competed for annually by members of the club in a series of road races held in Oakleigh.[ii] The first race was competed over 15 miles, the second over 10, and the third over 15 once more, with the Cup awarded to the cyclist with the highest aggregate points total after all three races.[iii] A maximum of 150 points (50 for finishing 1st in each race) could be awarded to a competitor. The race was also handicapped in increments of 30 seconds, with the more experienced riders starting anywhere up to five minutes after the main field.[iv]

From its inception, the Mackinnon Cup was hotly contested, drawing a field of 27 competitors in the inaugural races. Among those 27 were young-guns Norman Edgar Heckscher and Alex Charles McDonell, both just 18 years old. Although they did not finish on the podium in 1912, the experience sparked a friendly but competitive rivalry in the boys. A year later, in the 1913 Mackinnon Cup races, both Norm and Alex were vying for first place. The final 15-mile race was held on a blustery August afternoon, and saw a field of just 14, with the poor conditions of the slippery Oakleigh Road deterring many of the riders.[v] Of course, a little bit of rain could not stop the two determined teenagers, and both began the race with a 2½ minute handicap. Just inches separated first, second and third, but it was Norm who edged out Alex to win in a time of 43 minutes and 12 seconds.[vi] However, it was Alex who had the last laugh. His results of first in Race One, third in Race Two and second in Race Three were enough to give him the highest aggregate score,[vii] and award him the Mackinnon Cup for 1913. 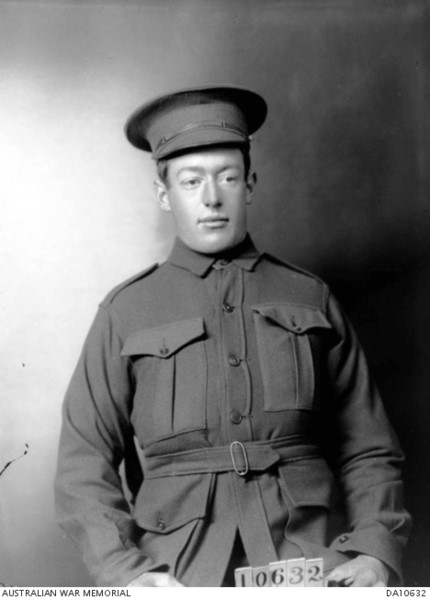 Alex’s cycling continued to improve after the win. Riding off scratch, he recorded the fastest times in both 1914 races[viii] [ix] (only two races were held due to the war intake reducing the field), although he was unable to edge out the handicapped riders to claim the Mackinnon Cup. It is unclear whether Norm participated in the racing, but he was awarded a premiership medallion at the completion of the 1914 cycling season.

In 1915, there were bigger things at hand than a cycling race. Australia had pledged its full support to Britain for the war in Europe. Norm and Alex enlisted in the AIF on 12 July 1915, both as reinforcements to the 23rd Infantry Battalion. After a brief training period in Broadmeadows, the pair embarked two days apart, Norm on 27 September 1915 aboard the HMAT Hororata,[x] and Alex on 29 September 1915 aboard the RMS Osterley.[xi] Both were bound for Egypt for further training. Upon arrival, Alex was admitted to 4th Auxiliary Hospital in Abbassia, Cairo with mumps. He was discharged on 29 December 1915 after four days recovering in hospital.[xii]

On 11 January 1916, at Tell el Kebir, Norm and Alex were taken on strength in the 23rd Infantry Battalion,[xiii] [xiv] who had suffered significant casualties at Lone Pine and had recently been evacuated to Lemnos Island. After gathering reinforcements in Egypt, the 23rd Battalion was sent to the Western Front in France, arriving on 19 March 1916.[xv] The boys from the Prahran Cycling Club were finally in the thick of it. 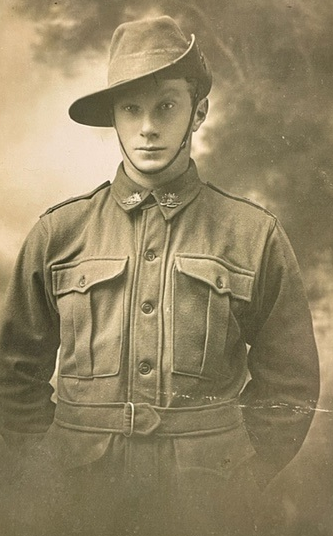 Occupying the “next in the line” trenches of the Armentieres sector in northern France[xvi] was a relatively gentle introduction to the Western Front for Norm, Alex and the 23rd Battalion; but the calm before the storm did not last long. In June, the battalion were transferred to the Somme to participate in the devastating battles of Pozieres and Mouquet Farm.[xvii] The village of Pozieres was captured by the Australian 1st Division on 23 July 1916. The division withstood countless German counterattacks to remain in control of Pozieres, eventually being relieved by the Australian 2nd Division (which included the 4th Brigade, and in turn the 23rd Infantry Battalion) on 27 July. Attacks on the old German lines to the north and east of Pozieres were conducted almost immediately by the 2nd Division. Constant German bombardment, and the resulting dust clouds, meant visibility was poor, and progress was slow and costly. After three days of fighting, the Australians had failed to make any substantial progress, and had lost over 3,500 men. 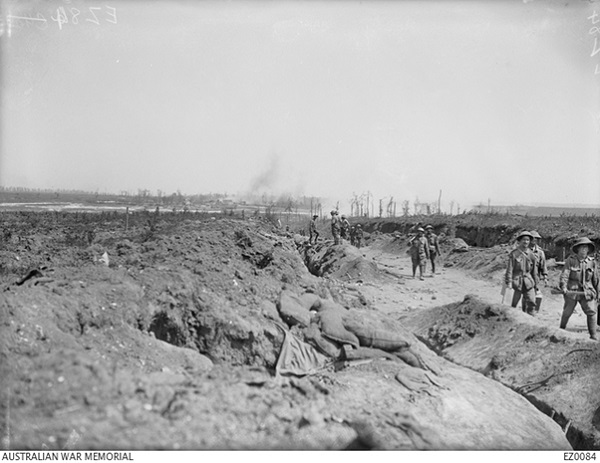 The road leading to Pozieres. The village of Contalmaison is being bombed in the distance
AWM EZ0084

During a final charge on 30 July, Private Alex Charles McDonell was shot in his left leg.[xviii] The bullet fractured his femur, leaving him incapacitated and dying in the blood-soaked sludge of no man’s land. The first attempt to save Alex failed; his rescuer was sniped in the back while returning to the trenches.[xix] Miraculously, amongst shell-holes, barbed wire, mud and corpses, Alex was found again by a stretcher-bearer. That stretcher-bearer, of all the thousands of men on the battlefield, was his cycling rival Private Norman Edgar Heckscher. The boys who had competed against each other for so many years were now teammates, racing to save Alex’s life. Norm managed to carry Alex safely through no man’s land, into the trenches and all the way to the casualty dressing station.[xx] There was nothing more he could do for Alex but pray the doctors and nurses at the dressing station were able to keep him alive long enough to get him to hospital. Norm was no doubt physically and emotionally exhausted from his journey with Alex, but he did not stop to rest. It is alleged he continued to drag soldiers from no man’s land for eleven straight days,[xxi] only stopping when he himself received a gunshot wound to the thigh.[xxii]

Norm spent a month in hospitals in Estaples and Calais in France before being transferred to 5th General Hospital in Wandsworth, England. He spent a further three months recuperating in England, and was officially discharged from hospital on 21 November 1916. Given his experience as a dentistry student before the war, and the lingering effects of his injury, Norm was transferred from the 23rd Infantry Battalion and posted to the 84th Dental Unit on 7 August 1917.[xxiii] He was simultaneously promoted to Staff Sergeant.[xxiv] Norm spent the rest of the war as part of this unit, and returned home to be discharged from the AIF on 24 January 1919.[xxv]

Alex’s wounds were severe and soon became infected, causing him to fall seriously ill. He was transported firstly to a hospital in Wimereux, France, but his rapidly declining health meant it was necessary to risk transferring him to England.[xxvi] He survived the journey, arriving at Military Hospital Whitechurch on 8 August 1916. For almost a year, Alex remained in English hospitals slowly recovering from his shattered femur. On 3 July 1917, he boarded the Hospital Ship Karoola bound for Melbourne.[xxvii] He disembarked on 27 August, and was finally medically discharged on 30 October 1917. His leg was still fractured some 15 months after the initial injury.[xxviii]

A 1916 article from The Prahran Telegraph recounts the details of a letter from Roland McDonell, Alex’s brother, addressed to Norm’s mother. Without this article, the story of Norman’s heroics may have been lost forever. The utter relief Roland must have felt when writing the letter is palpable:

“You can imagine how deeply indebted we all feel, my mother especially, to your brave boy for saving my brother, and we would like to congratulate you on being the mother of such a fine son…Norm was a personal friend of mine, and I can assure you I feel very proud to know him”.[xxix]

Alex and Norm’s story shows how mateship can transcend all else on the battlefield. The two young cyclists bravely answered the call and fought for their country. When they returned, they were far from the 18-year-old boys who had once competed together at the Prahran Cycling Club. Although Norman was never officially recognised for his bravery that day, I’m sure Alex would agree that the courage he showed is worth more than any war medal or cycling cup ever could be.