On the 7th of November 1917 a great eruption in the flow of history occurred in Russia. One of the most conservative empires in Europe, which until earlier in the year had been ruled with an iron fist by the Romanov family, was seized by radical communists keen to establish a new experimental form of government.  In the process the fledgling communist government caused major shifts in the direction of the First World War.

Up until 1917 Russia had been an authoritarian monarchy ruled by the Tsar. The power of the Imperial family had gone unchecked until the 1905 revolution, when, prompted by Russia's loss in a war against Japan over the control of Korea, the workers and peasants revolted. At a march outside the Tsar's palace in Saint Petersburg in January 1905 unarmed protesters where shot at by guards. The death toll was uncertain but estimates range from a modest 96 up to 4000.[1] The tragedy came to be known as “Bloody Sunday” and became the catalyst for wider unrest which did not dissipate. Eventually Tsar Nicholas the Second relented to some of the demands of the revolutionaries including the establishment of a Russian Parliament with only advisory powers and the uprising died down. 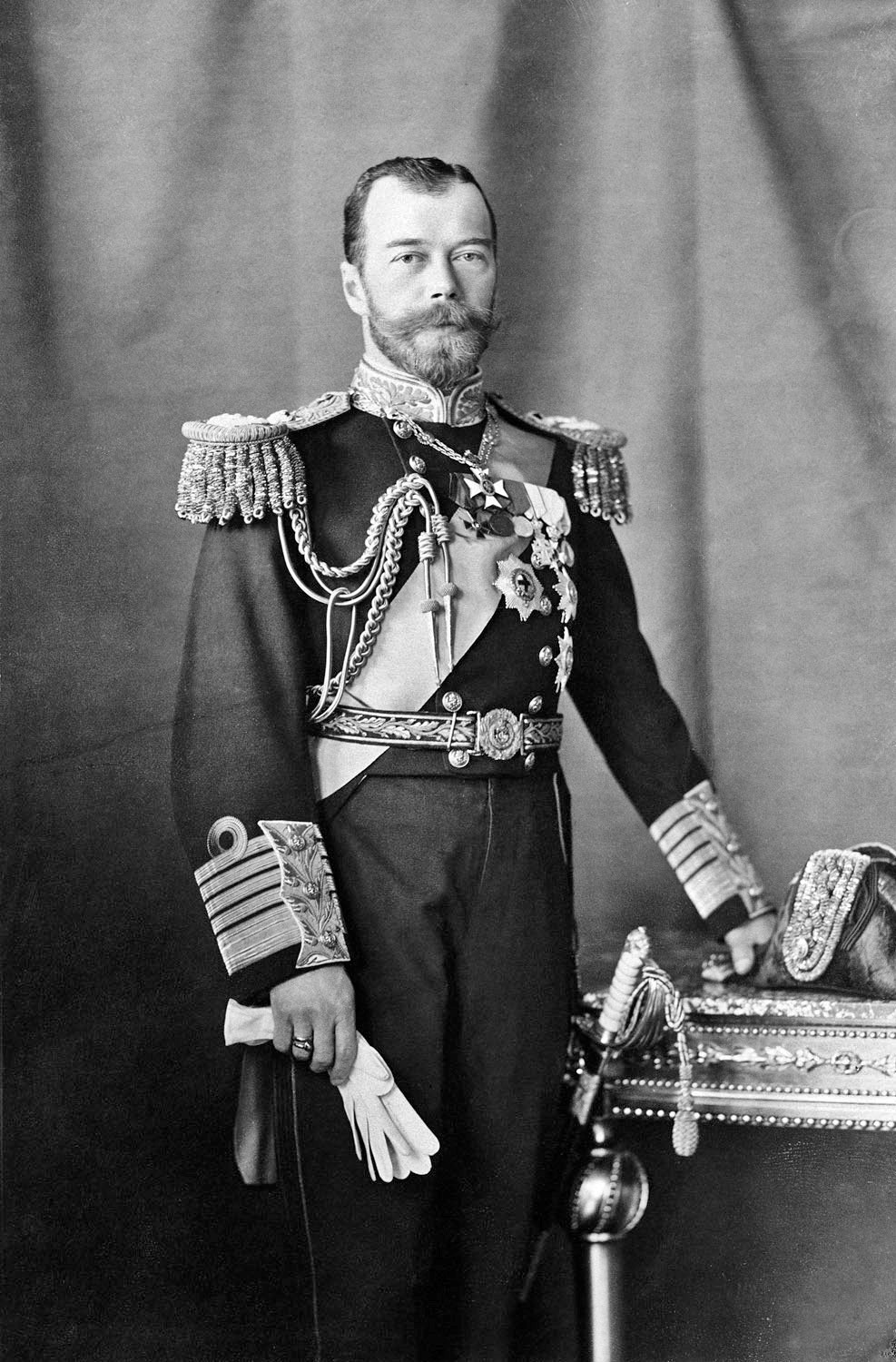 After the 1905 Revolution, the Tsar maintained effective control over the government and continued to live a lavish lifestyle whilst much of the population lived in terrible conditions. The resentment towards the Imperial family continued to grow and tension escalated when in response to his son Alexei's diagnosis of haemophilia, the Tsar and his wife Alexandra hired a mystic from Siberia named Grigori Rasputin, who claimed that he could heal the young prince. Rumours soon spread that Rasputin was having an affair with the Empress and using satanic powers to influence the Tsar. 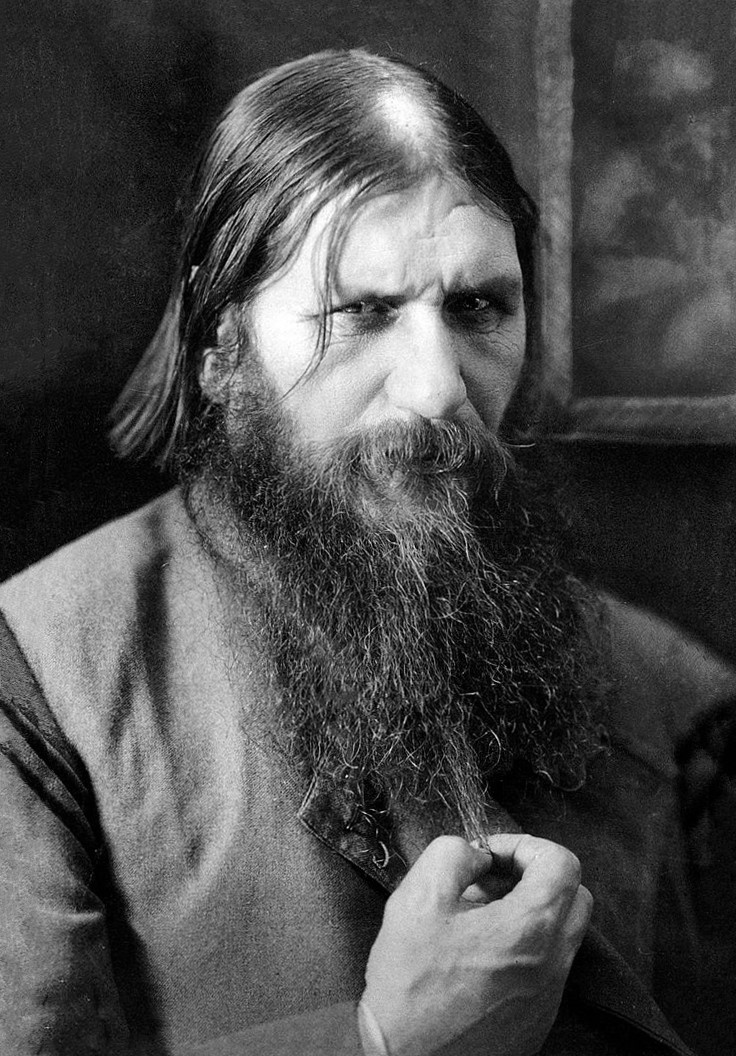 Russia became involved in the First World War in 1914 siding with her ally and fellow Slavic nation, Serbia, which was attacked by Austria-Hungary. This gesture resulted in needing to defend its norther borders against the German Empire and its southern borders against the Ottoman Empire. Despite the large number of troops to call upon, the Russian military was poorly equipped compared to her enemies, especially Germany and, as a result, suffered massive casualties resulting in much of the western territory of the Empire captured by enemy forces. By the end of the war Russia had suffered over 9 million casualties and over 2 million killed.[2] The massive suffering had terrible demoralising effects on the troops and ideas of desertion and revolution soon began spreading. 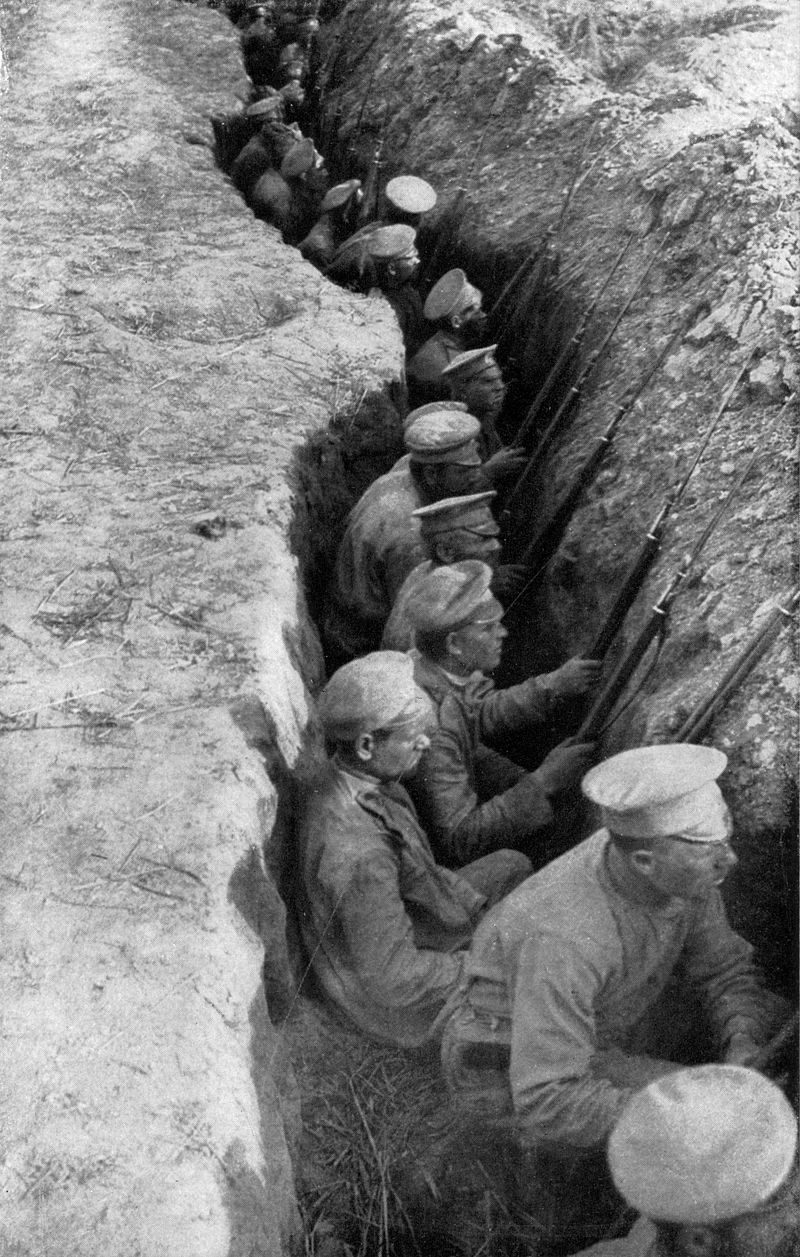 The lack of morale was also becoming widespread at the home front, especially amongst the working classes, who failed to see the reason for the war and were soon demanding an end to the fighting. These demands grew louder and were added to by protests against food rationing. In March 1917 (February in the Old Style calendar) massive demonstrations erupted against the monarchy in the capital of Petrograd in what became known as the February Revolution. A few days later several mutinous army units sided with the revolutionaries and it soon became clear that Tsar Nicholas the Second would have to abdicate as Emperor of the Russians, which he did so on the 15th of March 1917. A Russian Republic was then proclaimed. 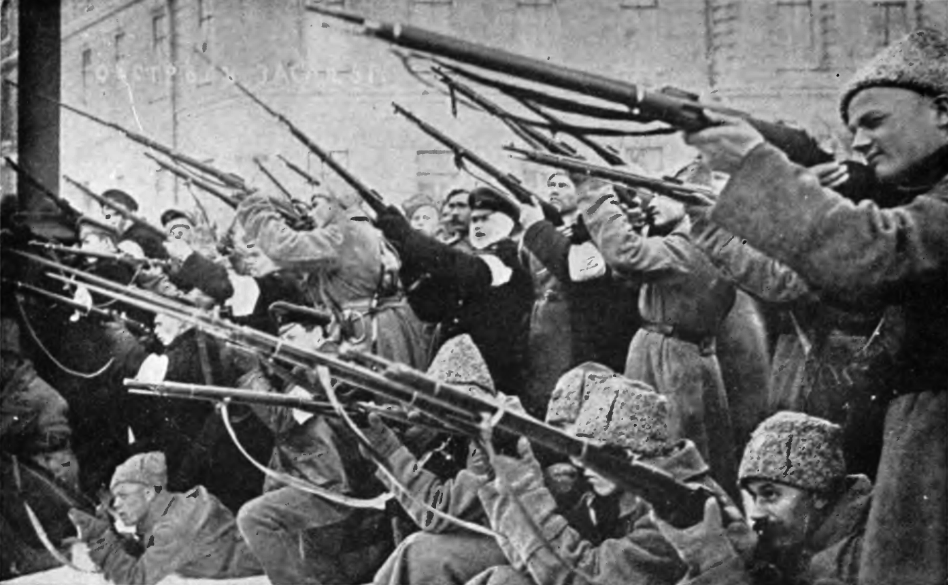 The February Revolution that swept the Tsar from power had many immediate and long term effects on Russia, the First World War and the world as a whole. In the short term, an attempt to set up a democratic parliamentary republic under moderate socialist Alexander Kerensky began. The official government, although with the support of the Allied powers was unable to exert sufficient control within Russia itself as workers, soldiers, sailors and many other segments of society began to organise themselves into councils known as “Soviets”. These councils would then decide how its members were to act in response to any governmental orders and decrees. As the government tried to continue the prosecution of the war, they found resistance from many Soviets where its members voted to not fight.

Into this chaotic situation stepped prominent Bolshevik leader, Vladimir Lenin. The Bolshevik Party was a radical Marxist Communist offshoot of the more moderate Socialist Party of Russia. Lenin had been living in Switzerland as being a committed revolutionary had made it far too dangerous to live in his homeland. Upon the outbreak of the February Revolution, he arranged with German authorities for a train to transport him across the continent to Petrograd with the promise that he would pull Russia out of the war if the Bolsheviks were successful in seizing power. The Germans, fearful of the spread of Socialist ideology insisted that the train be sealed shut. Lenin and his entourage arrived in Petrograd on the 16th of April and immediately began preaching revolution and an end to the war. These ideas proved popular amongst the masses and the Bolsheviks became more influential on the Soviet councils across the country. One of Lenin's most popular slogans at this time was “All Power to the Soviets!”[3] The Bolsheviks also began forming an armed division known as the “Red Guards”. 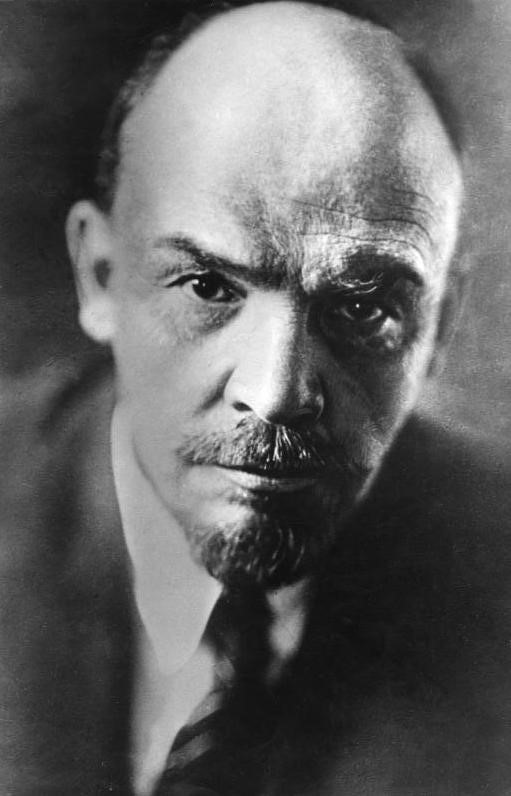 On the 7th of November, Lenin and his inner circle including Leon Trotsky and Joseph Stalin decided that the time to seize power had come. The Red Guards systematically occupied key strategic points across Petrograd and the city's garrison and the sailors of ships in Petrograd port joined the uprising and by the end of the day Kerensky had fled the capital. Throughout the evening and night the Red Guards led a final assault on the Winter Palace, the former home of the Imperial family and by 2 A.M. the next day the Cabinet of the republican government had surrendered. Russia had fallen into the control of radical Marxist revolutionaries. 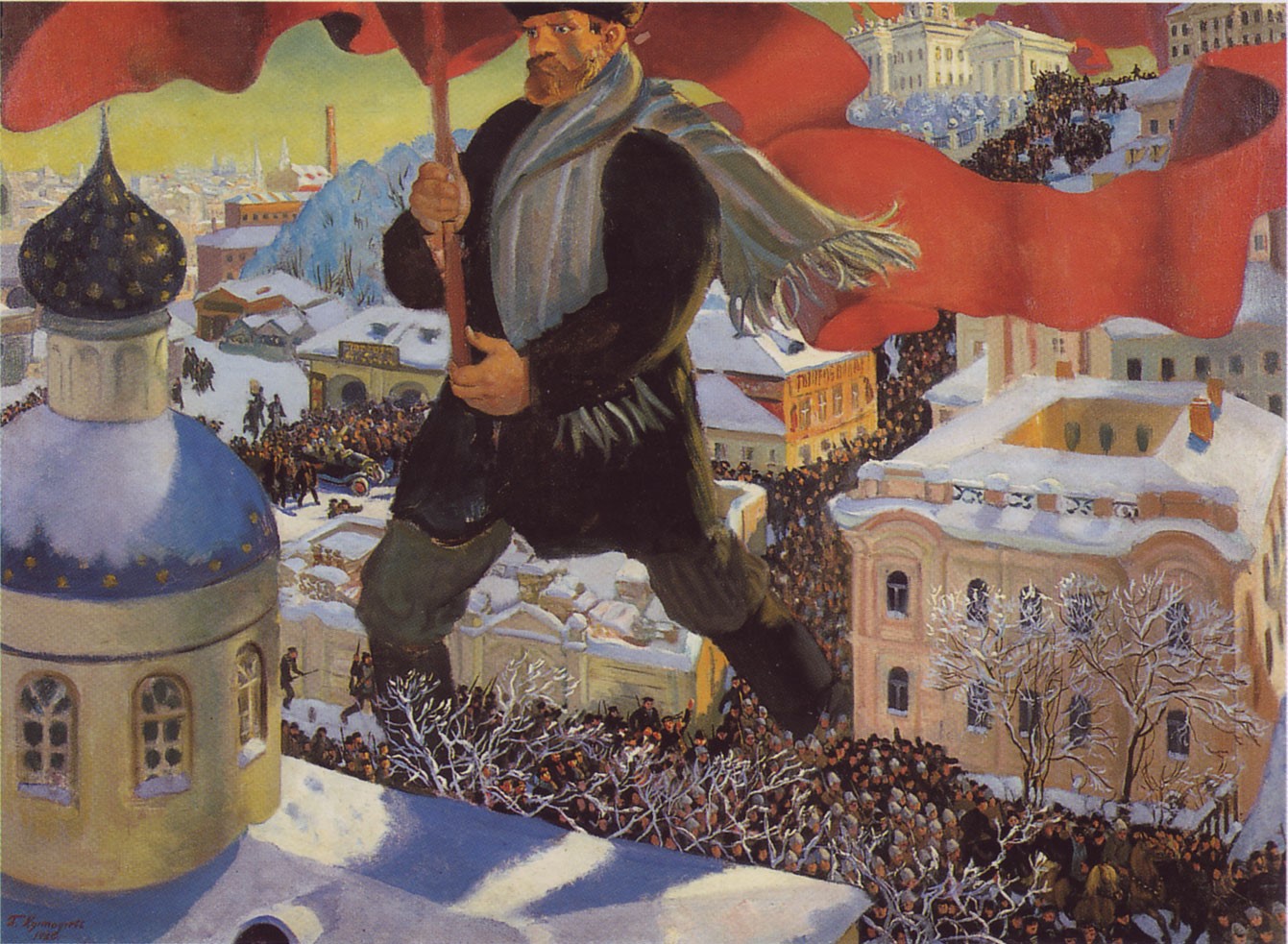 The newly formed Communist government almost immediately faced military opposition from other more conservative forces in Russia and the situation soon developed into a civil war between the Communists and their “Red Army” and other forces that came to be known as “White Army”. Many Western European, American, Japanese and even Australian forces also tried to help the Whites defeat the Reds but by 1922 the Communist forces managed to gain control over most of the territory of the old Russian Empire and a new state by the name of the “Union of Socialist Soviet Republics”(USSR) was established. 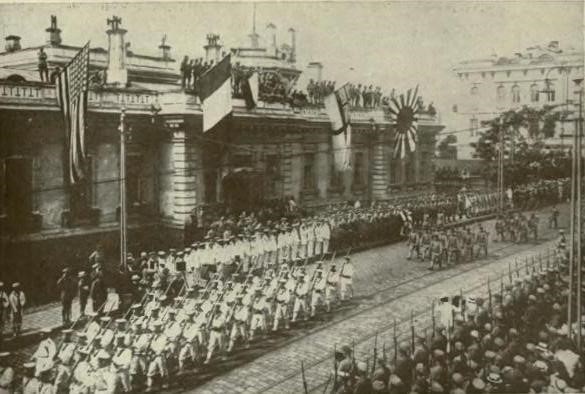 Once he had established power in Russia, Lenin soon moved to uphold his end of the bargain with the Germans and signed a peace treaty to pull Russia out of the First World War. This treaty was known as the Treaty of Brest Ltovsk and it handed over massive swathes of Russian territory to the control of Germany and Austria-Hungary including Estonia, Latvia and Lithuania, Belarus, Poland and Ukraine. Finland was granted independence. The Bolsheviks did not worry about the loss of so much territory as they were convinced that a world-wide Communist revolution was imminent and that a global Marxist government would soon be established. Russia also agreed to pay six billion marks in compensation to the German government.

In pulling Russian forces out of the war it had the effect of freeing up large numbers of German troops who were soon sent to the Western Front in France and Belgium to push for a final victory in the war. This push became known as the Spring Offensive of 1918, which although successful at first soon petered out and by July the Allies were able to push the Germans back and thus beginning a new attack on German forces in August known as the Hundred Days Offensive.

The political reaction of other countries to the Communist revolution in Russia was one primarily of shock and horror. Over the next few turbulent years, worker uprisings occurred in many countries including in Germany, where for a time a “Bavarian Soviet Republic” was formed, Hungary with the short lived Hungarian Soviet Republic and in Finland, The Netherlands, Italy, Canada and China. But the promised global revolution never materialised, instead over the next few years a movement towards violently anti-communist governments was prominent in much of Europe including in Italy, with the rise of Benito Mussolini's Fascists and the establishment of the National Socialist dictatorship in Germany under Adolf Hitler.

The Russian Revolution of November 1917 was a world shattering event that had effects in all corners of the globe both immediately and in many decades to come. Indeed tensions continue to this day. The communist takeover of the Russian government also had immediate effects on the conduct of the First World War by allowing German Forces to refocus on the Western Front and also drew in the forces of Allied powers into the developing civil war in Russia.