One Hundred Years since the signing of the Treaty of Versailles

lessons of war for each and every nation,

so quickly forgotten are the horrors of war

we wait twenty years and do it some more. 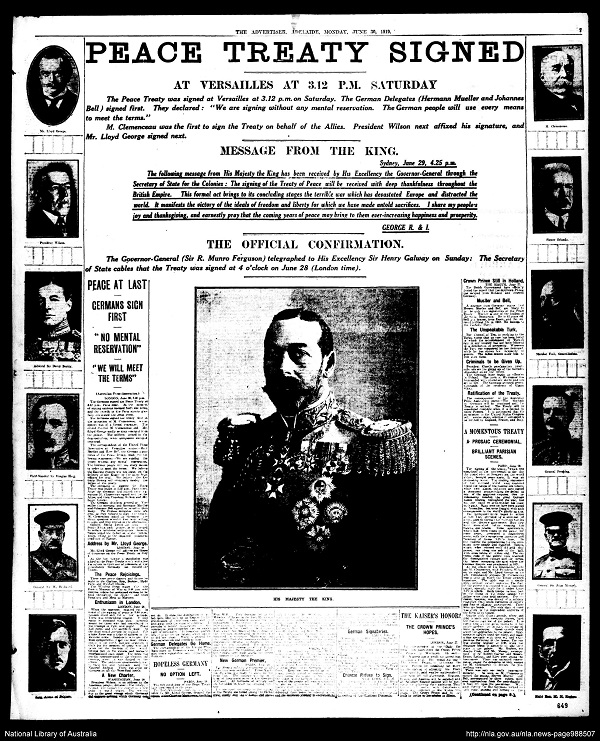 On the 28th of June 1919, five years to the day since the assassination of the Archduke Franz Ferdinand of Austria-Hungary, First World War with Germany officially ended with the signing of the Treaty of Versailles at the Paris Peace Conference. This conference followed on from the armistice of 11 November 1918. Its specific intent was the negotiation of a lasting permanent settlement with the defeated powers of Germany, Austria-Hungary and the Ottoman Empire in order to reestablish peace around the world.

The conference was formally opened on the 18th of January and was attended by leaders and delegations from around the world including the United Kingdom, the United States of America, France, Japan, Australia, Canada, the Middle East and a number of smaller European powers. One notable absentee was the newly created Soviet Russia. The Tsarist regime had collapsed early in 1917 and had subsequently been replaced with a communist government led by Vladimir Lenin. Lenin had signed a unilateral peace treaty with the Central Powers known as the Treaty of Brest-Litovsk. Russia was also embroiled in the chaos of civil war. A combination of these two factors led the leaders of the capitalist Western powers to not invite the Russians. The defeated powers were also not permitted to attend the conference until the victors had negotiated the details of the peace treaties that were to be presented to them. 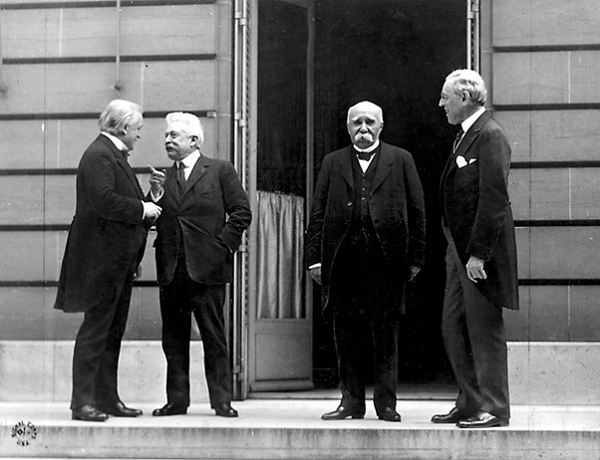 Some of the aims of the allies had already been outlined in American President Woodrow Wilson’s Fourteen Points speech of January 8th, 1918. In that speech Wilson had demanded that all international treaties and agreements be open to the public, that the interests of populations concerned be taken into account when determining sovereignty and that a global “association of nations” be established to defend peace and the sovereignty and independence of small and large nations alike. Wilson’s more specific demands included the evacuation of Russian territory occupied by German forces after the Treaty of Brest-Litovsk, an independent Poland and the principle of self-determination for the various nationalities of the Austro-Hungarian and Ottoman Empires.

Discussions between the leaders at Paris, most notably David Lloyd George of Great Britain, Georges Clemenceau of France and Vittorio Emanuele Orlando of Italy determined that the newly established German Republic would lose territory in the east to Poland, Czechoslovakia and Lithuania. Some territory was also lost to Denmark and Belgium. The Alsace-Lorraine region was returned to France. Two further regions, the small Saar region was administered by the League of Nations for 15 years and the port city of Danzig was declared an international city.

Other conditions that were placed upon the defeated Germans included limiting the size of the German military to 100,000 men in a maximum of seven infantry and three cavalry divisions and keeping all military activity east of the Rhine River. Article 321 of the Treaty of Versailles would prove to be particularly controversial to the Germans. It stated that:

The treaty also required Germany to pay an equivalent of 20 billion gold marks ($US5 billion) in gold, commodities, ships, securities or other forms. 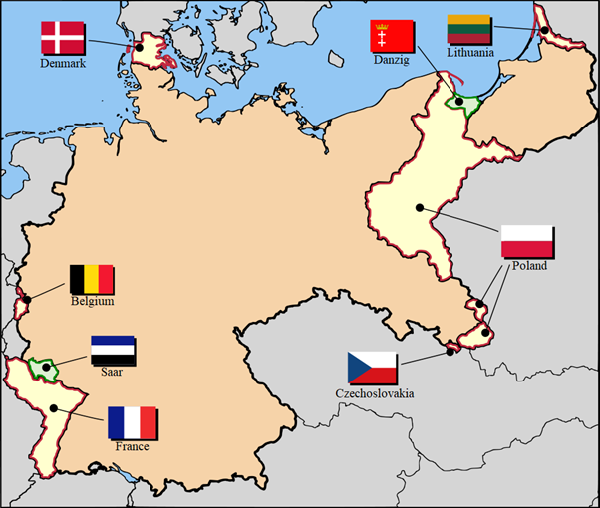 Final German territorial losses after World War I. Green were Administered by the League of Nations, cream were annexed or transferred to neighbouring countries by the treaty.

For the collapsed Austro-Hungarian Empire, the leaders at the Peace Conference decided on a series of borders that would have profound effects on the future of Europe for decades to come. Out of the ruins of the old Habsburg Empire emerged the nations of Austria, Hungary, Czechoslovakia, Yugoslavia, parts of Romania, Poland and the Ukraine. The new nations of eastern Europe had already begun to emerge from the chaos of war and revolution and the negotiators at Paris had to recognize this reality. This region would continue to be politically unstable to the end of the 20th century. 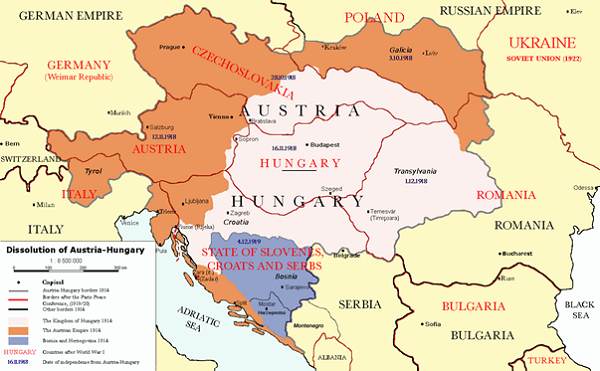 New borders of the former Austro-Hungarian Empire after the Treaty of Trianon and Saint Germain.

In the Middle East, the removal of the Ottoman Empire created the conditions for the leaders of the British and French Empires to redraw the boundaries between their different spheres of influence as well as define each territory's national identities. What was established were “League of Nations Mandates”, as they became known. These were Palestine and Mesopotamia as British mandates and Syria as a French Mandate.

There were not the only mandates that were established out of the Paris Peace Conference, as there were also a number in Africa created from German colonies given to the United Kingdom, Belgium, France, Portugal and South Africa. In the Asia-Pacific, former German possessions of New Guinea, Nauru, Samoa and Shandong were transferred to Australia, New Zealand and Japan. 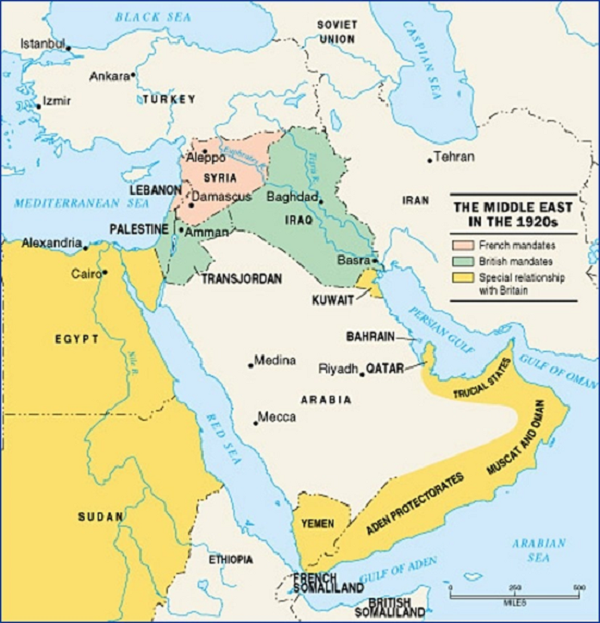 A map of the mandates in the Middle East after the First World War.

The establishment of the League of Nations was one of United States' President Woodrow Wilson's main aims at the Paris Peace Conference. This was to be a global intergovernmental organisation tasked with protecting and promoting world peace. Very much a forerunner of the United Nations established at the end of the Second World War, the League was unfortunately weakened by the absence of the United States, who contrary to Wilson’s wishes, stayed out of the league by a vote in the Congress. The League of Nations was also hampered by institutional weakness, unlike the United Nations, resolutions of the League’s Council or Assembly required a unanimous vote. The League of Nations ultimately proved to be incapable of dealing with the threats to world peace that emerged from Germany, Italy and Japan in the 1930’s. 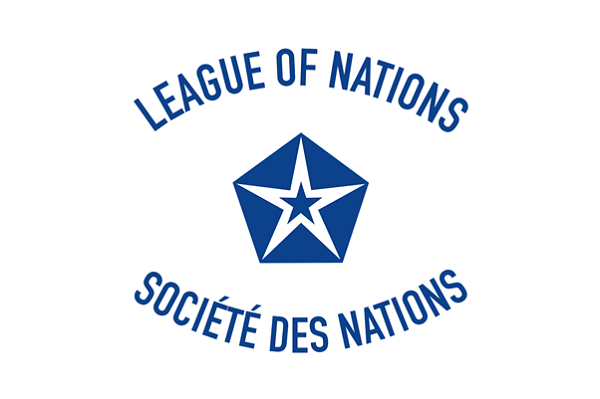 Flag of the League of Nations

The Signing of Peace in the Hall of Mirrors - by Sir William Orpen.

On the 28th of June at the Hall of Mirrors in the Palace of Versailles, the same place that the establishment of the German Empire was declared in 1870, Johannes Bell and Hermann Müller signed the treaty of Versailles on behalf of the German Republic.

The consequences of the treaties that emerged from the conference, especially in Germany and Japan were catastrophic. The Japanese had proposed that a racial equality clause be inserted into the Covenant of the League of Nations stating that:

“The equality of nations being a basic principle of the League of Nations, the High Contracting Parties agree to accord as soon as possible to all alien nationals of states, members of the League, equal and just treatment in every respect making no distinction, either in law or in fact, on account of their race or nationality.”[ii]

But the Australian delegation, under the leadership of Prime Minister Billy Hughes, wanted to protect the “White Australia Policy” and lobbied the British to vote against the motion. The defeat of the proposal influenced Japan's turn from cooperation with the West toward more nationalistic policies and ultimately to the invasion of European powers colonies in Asia during the Second World War. 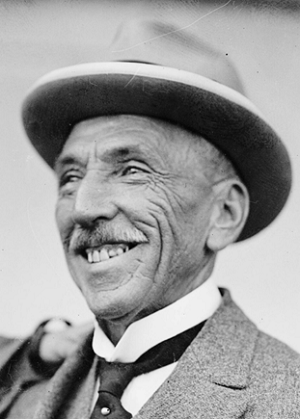 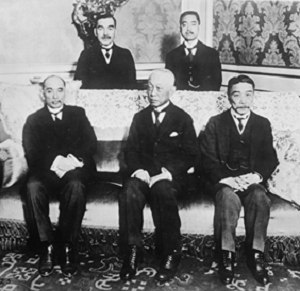 In Germany, the reaction from many, especially on the far right was outrage at the conditions that their country was forced to accept. Throughout the 1920’s and early 1930’s, parties which promoted the reversal of the Treaty of Versailles conditions gained in profile and popularity until in 1933, the National Socialist Party under the leadership of Adolf Hitler came to power. Hitler proceeded over the next few years to rearm Germany and piece by piece conquer territory such as Austria and Czechoslovakia that they were forbidden to occupy. Eventually, Hitler wore out the patience of the Western powers and with the invasion of Poland on September 1 1939 leading to the declaration of War on Germany by England and France on 3 September 1939.

Many observers predicted that the treaties that emerged from the Paris Peace Conference would ultimately fail including John Maynard Keynes, who said that the treaty was too harsh, a "Carthaginian peace", and that the reparations figure was excessive and counter-productive.[iii] French General Ferdinand Foch famously considered the Treaty of Versailles too lenient on Germany and declared: "This is not a peace. It is an armistice for twenty years".[iv]

Final German territorial losses after World War I. Green were Administered by the League of Nations, cream were annexed or transferred to neighbouring countries by the treaty.: https://commons.wikimedia.org/wiki/File:German_losses_after_WWI.svg

New borders of the former Austro-Hungarian Empire after the Treaty of Trianon and Saint Germain.: https://commons.wikimedia.org/wiki/File:Dissolution_of_Austria-Hungary.png

Flag of the League of Nations: https://commons.wikimedia.org/wiki/File:Flag_of_the_League_of_Nations_(1939).svg

The Signing of Peace in the Hall of Mirrors - by Sir William Orpen.: https://commons.wikimedia.org/wiki/File:William_Orpen_%E2%80%93_The_Signing_of_Peace_in_the_Hall_of_Mirrors,_Versailles_1919,_Ausschnitt.jpg

Japanese delegation to the conference: https://commons.wikimedia.org/wiki/File:Japanese_peace_delegates_in_1919_with_Makino_Nobuaki.jpg

[i] Treaty of Versailles, Article 231