“… there has never been a period in all these long centuries of which we boast when an absolute guarantee against invasion, still less against serious raids, could have been given to our people. … There was always the chance, and it is that chance which has excited and befooled the imaginations of many Continental tyrants. Many are the tales that are told. We are assured that novel methods will be adopted, and when we see the originality of malice, the ingenuity of aggression, which our enemy displays, we may certainly prepare ourselves for every kind of novel stratagem and every kind of brutal and treacherous manœuvre. I think that no idea is so outlandish that it should not be considered and viewed with a searching, but at the same time, I hope, with a steady eye. We must never forget the solid assurances of sea power and those which belong to air power if it can be locally exercised.” – Winston Churchill, 4 June 1940, House of Commons

As Churchill tried hard to convince the House of Commons in the famous “fight them on the beaches” speech of 4 June 1940, the Royal Navy was not an impenetrable wall against German attack. Indeed, Operation Sea Lion, the planned (but ultimately abandoned) German invasion of Britain in 1940, is one of the great “what ifs” of military history.

For a brief period in the late summer of 1940, that invasion was a real threat. During May and June, the Germans had swept across western Europe, conquering the Netherlands, Belgium and Luxembourg in a few days and France in a matter of weeks. Britain had indeed saved most of its army at Dunkirk, but had lost most of its equipment. The German High Command had to hurriedly come up with an operational plan for the next phase of the war.

On 16 July 1940, after the fall of France, Hitler issued Führer Directive No. 16, setting in motion preparations for a landing in Britain. He prefaced the order by stating: "As England, in spite of her hopeless military situation, still shows no signs of willingness to come to terms, I have decided to prepare, and if necessary to carry out, a landing operation against her. The aim of this operation is to eliminate the English Motherland as a base from which the war against Germany can be continued, and, if necessary, to occupy the country completely." The code name for the invasion was Seelöwe, "Sea Lion".

Hitler's directive set four conditions for the invasion to occur. These were for:

1.      The RAF to be "beaten down in its morale and in fact, that it can no longer display any appreciable aggressive force in opposition to the German crossing",

2.      The English Channel was to be swept of British mines at the crossing points, and the Strait of Dover must be blocked at both ends by German mines,

3.      The coastal zone between occupied France and England must be dominated by heavy artillery.

4.      The Royal Navy must be sufficiently engaged in the North Sea and the Mediterranean so that it could not intervene in the crossing and British home squadrons must be damaged or destroyed by air and torpedo attacks.[i] 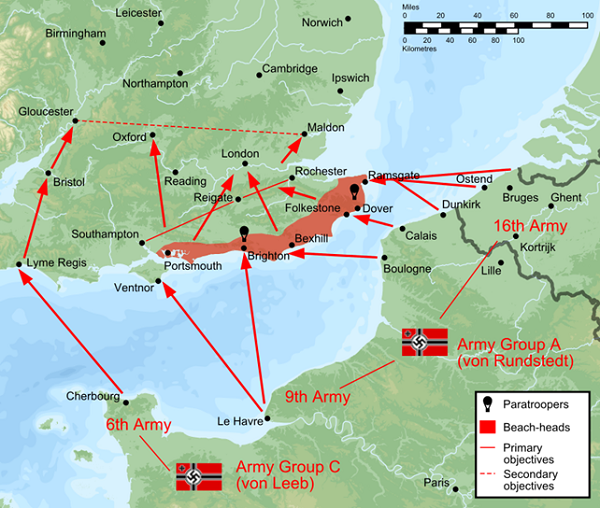 Plan of battle of Operation Sea Lion, the cancelled German plan to invade England in 1940.
https://commons.wikimedia.org/wiki/File:OperationSealion.svg

The plan was to land on the southern coast of England on a wide front from Ramsgate in the east and the Isle of Wight in the west with a heavily armed force supported by panzers and various specially designed equipment such as anti-tank guns and captured French tractors.[ii] These landings were to be also supported by paratroopers as well as large guns set up on the French coast.[iii] The primary objectives were to capture the immediate area on the southern coast of England before moving north to capture London with a secondary objective line just north of Oxford. It was assumed that by this stage, if not earlier, the British Government would be forced to surrender.[iv] 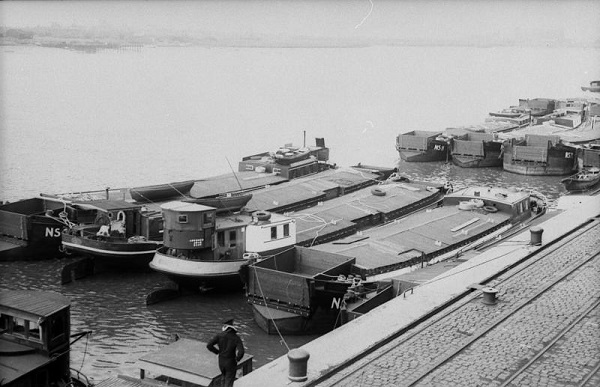 Invasion barges assembled at the German port of Wilhelmshaven.
https://commons.wikimedia.org/wiki/File:Bundesarchiv_Bild_101II-MN-1369-10A,_Wilhelmshaven,_Prahme_f%C3%BCr_%22Unternehmen_Seel%C3%B6we%22.jpg

Some German commanders, such as Hermann Goering, the leader of the German Air Force, were convinced that such a plan could not work and hoped that through an early air victory in the Battle of Britain, there would be a surrender and such an invasion would not be necessary.[v]

After a potential British surrender, the Nazi plan for the future of the United Kingdom is somewhat unclear. Well into the war, Adolf Hitler entertained the thought of Britain negotiating peace and joining the war on the Axis side.[vi] At other times the plan was much harsher. Britain was to be divided into 6 separate military occupation zones headquartered in London, Birmingham, Newcastle, Liverpool, Glasgow and Dublin.[vii] The overall British administration was to be headquartered at Winston Churchill's ancestral home of Blenheim Palace.[viii] Lists were also drawn up of who the Germans thought would be willing to run a Nazi-friendly British government. This was headed by the leader of the British Union of Fascists, Oswald Mosley.[ix] Although it has never been fully established, many believe that the recently abdicated Edward VIII would have been restored to the British throne under German occupation.[x]

Another, darker aspect of the potential German occupation of the United Kingdom was the plans the Nazis had for those who had expressed anti-Nazi views. A “Black Book” was drawn up containing the names of those who were to be rounded up and arrested in the aftermath of a surrender. The list included large parts of the British establishment, from politicians such as the Prime Minister, Winston Churchill and his supporters to academics, journalists, poets and even authors such as H.G. Wells and Virginia Woolf.[xi] The Ministry of Information was going to be tasked with shutting down anti-German newspapers. There were also plans on transporting 300,000 British Jews to the continent.[xii] 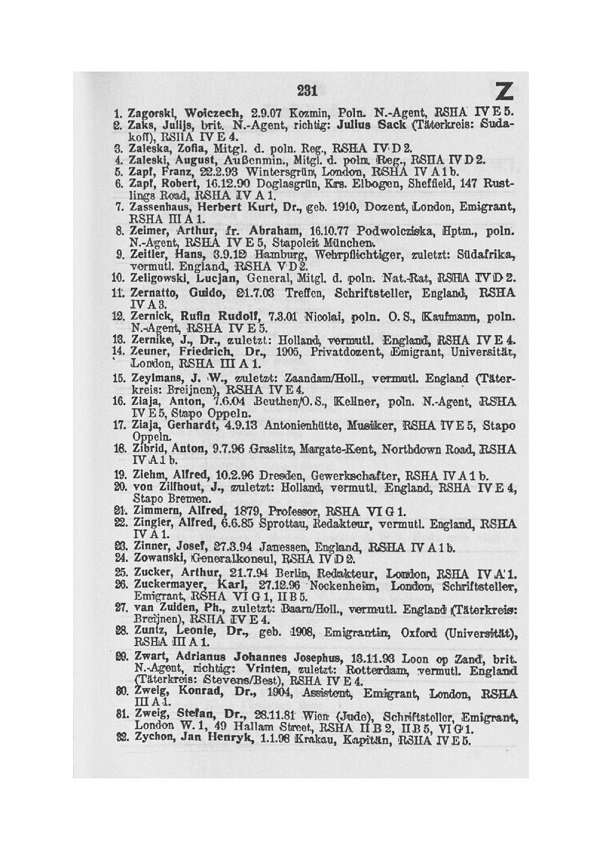 A page from the Black Book (Sonderfahndungsliste G.B., page 231 Z)

Although Operation Sea Lion or the following occupation never went into effect, the topic has interested military strategists. In 1974, the Royal Military Academy Sandhurst conducted a war game exercise to see what may have happened. In the game, the Germans were able to land almost all their first echelon forces on 22 September 1940, and established a beachhead in south-east England, capturing Folkestone, and Newhaven, even though the British had demolished the facilities of both ports. The British army forces, delayed in moving units from East Anglia to the South East by bomb damage to the rail network south of London, were nevertheless able to hold onto positions in and around Newhaven and Dover, sufficient to deny their use by German forces. On the second day a Royal Navy force of cruisers and destroyers was able to reach the Channel from Rosyth, in time to intercept and destroy most of the barges carrying the second and third echelon of German amphibious landings. Without the second and third echelons, the forces ashore were cut off from reserves of artillery, vehicles, fuel and ammunition supplies; and blocked from further reinforcements. Isolated and facing fresh regular troops with armour and artillery, the invasion force was forced to surrender after six days.[xiii]

In conclusion, although any plans for Operation Sea Lion were doomed from the German failure in the Battle of Britain and it may have failed even if that went differently, it has always been a fascinating counterfactual. There have been books, films and video games all trying imagine how a German invasion of Great Britain may have played out in reality and there will undoubtedly be many more takes on the topic.