When I think of Remembrance Day, I am always reminded of the classic war poem ‘In Flanders Fields’ by Canadian Lieutenant Colonel John McCrae.

“We shall not sleep, though poppies grow

At school, we would sell plastic poppies for a gold coin during our morning roll call and wear them in our shirt pockets for the day. At 11 am, the whole school would file to the lawns by Memorial Hall to hear a rendition of John McCrae’s famous poem before falling silent for 2 minutes.

When I was in Year 11, Remembrance Day fell in line with our English poetry topic, and we spent the lesson analysing ‘In Flanders Fields’. We talked about the juxtaposition of life and death and the imagery of poppies sprouting amongst the rows of fallen soldiers.

‘In Flanders Fields’ is the first poem for which I really had an appreciation. I would have been 10 or 11 when I first heard it, and even though I didn’t quite understand the nuances of McCrae’s writing, the fact that his rhythmical flow managed to lull 500 boys into silence made me realise I was hearing something quite profound.

My reflection on my school-based experience of Remembrance Day and poetry motivated me to research Australia’s contribution to poetry during the Great War period. I was not aware of these men before I began researching, which made the discovery of their stories and verses all the more interesting.

The first poet is described as “the Rupert Brooke of the Australian Imperial Force,”[1] and is widely regarded as Australia’s greatest WW1 poet. His name is Sergeant Leon Maxwell Gellert and he was born on the 17th of May 1892 in Walkerville, South Australia. 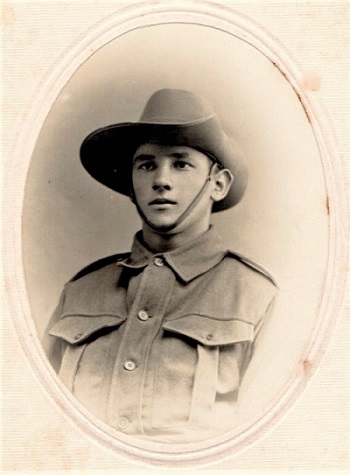 His upbringing was not without its hardships. Gellert was ‘flogged’ by his father to the point that he felt the need to seek self-defense training from the local Young Men’s Christian Association.[2] Having acquired enough knowledge, Leon managed to thwart his next beating by throwing his father on his back.[3] Despite their problematic relationship, Leon was grateful that his father introduced him to literature at a young age.[4] In an article published in The Express and Telegraph (Adelaide) in June 1917, Gellert says he wrote his first poem at the age of 9, although he “wouldn’t like to see the things [he] wrote back then.”[5]

Gellert graduated from Adelaide High School in 1909 and began a Teaching Degree at the University of Adelaide, majoring in the subjects of Modern European History and English Language and Literature. He taught Physical Education at Hindmarsh Public School before enlisting in the AIF as part of the 10th Infantry Battalion on the 22nd of August 1914. During the training at Morphettville camp, an eager Private Leon Gellert was promoted to Corporal.

Corporal Gellert then embarked from Adelaide in October aboard the troop-ship HMAT Ascanius. He wrote poetry on the trip to Cairo in order to pass the time:

“If you could see the satire-moon shining on the deep,

You’d say the world was not unkind, but just a sleeping child,

You’d say the world had gone to sleep,

And while it slept

During his training in Egypt, Gellert was again promoted, this time to Sergeant. The 10th Battalion, as part of the covering force, landed at Gallipoli on the 25th of April 1915 early in the morning. By noon, Sergeant Gellert had been hit in the face by a shrapnel pellet, but he continued to fight.[7] In the afternoon, he was concussed by an exploding shell nearby. It was over half an hour before he regained his senses and began searching for his battalion. He would spend the whole night searching before being reunited in the morning. They had gained considerable ground thanks in part to Lance Corporal Philip Robin and Private Arthur Blackburn, who penetrated further inland than any other Australians at ANZAC.[8] During the first week of fighting, the 10th Battalion lost almost 400 of its men.[9]

For the next 3 months, Sergeant Gellert spent time in the trenches, where he wrote many of his most graphic poetry:

“…Cover those staring eyes and go

And stab in the red, red rain.

Show me that blood and leave me. They groan

Leon suffered from septicemia and dysentery in July and was evacuated to Malta. He continued to write poetry in his hospital bed:

Is there no red?

Has all the blood on the earth been shed?

Each Queen! Each King! And every Jack!

In Malta he contracted an intestinal infection which lead to his transfer to a hospital in Weymouth, England. There, Sergeant Gellert felt the continued effects of the concussion he received from the ANZAC landing, and it was decided he was unfit for service and should be sent home. He travelled back to Adelaide on the very ship he had embarked on almost two years earlier.

Upon returning home, Leon was diagnosed with suspected epilepsy and discharged from the AIF. He immediately re-enlisted but upon his discovery a few weeks into his training was again discharged on medical grounds. His supposed tendency to epilepsy never came to fruition later in life.[12]

Following his discharge for the second time, he found time to compile his poetry from the war into a book called ‘Songs of a Campaign.’ It won the Adelaide University's Bundey prize for English verse[13] and was republished and illustrated by Norman Lindsey. He later published a second book, ‘The Isle of San,’ although it was not received nearly as positively as his first. 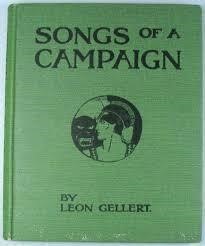 On Christmas Day in 1918, he married Kathleen Patricia Saunders.[14] He went on to work for a school in Sydney before taking over as co-editor of the magazine Art in Australia. The company that published his magazine was bought by the Murdoch Family in 1934, but Leon stayed on and eventually began writing his own column ‘Something Personal’ for the Sunday Herald.

Sadly, in 1940, the Gellerts’ only child and grandchild died in childbirth. Kathleen died in 1969, which prompted Leon to return home to Adelaide to spend his last years with his beloved dachshund. He died in 1977.

Leon Maxwell Gellert is remembered as a writer and a poet, but he was also an extremely brave and loyal soldier. His courage at the Gallipoli landing and his undying urge to serve his country should be commended as much as his literary works continue to be.

[11] An excerpt from ‘Patience’ by Leon Gellert.