A walk through the grounds of the University of Adelaide leaves one in no doubt that it is one of the more venerable institutions of that city.  Memorials and commemorations abound, from plaques and honour rolls, to entire buildings.

One such building is the Johnson Chemical Laboratories.  They stand as a tribute to a man and his family who,although he was English born, invested a great deal in the new country of Australia and fully intended to make his home here.  However, his intent was cut short by the outbreak of war.  The Johnson involvement in Australia continued after the war and now the family has a strong presence in England and Australia. 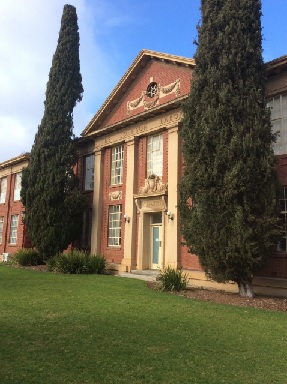 Born at Dunham Massey, Altrincham on 24 September 1889, Ronald Lindsay Johnson was the youngest son and sixth child of William Henry and Agnes Morton Johnson (née Brown) of Woodleigh, Dunham Massey. Educated at Summer Fields School, Eton (where he was a member of the Cadet Corps), Ronald went on to study the Classics at King's College, Cambridge (entering on 14 January 1909), from where he graduated with a BA in 1911 (a posthumous MA was to follow in 1917).

Upon the outbreak of war, Ronald returned to the UK in order to enlist and, on 2 October 1914, he applied for a commission in the cavalry. After passing a medical board in Manchester the following day, he was rejected for a commission in the cavalry but accepted into the artillery on 5 October. Taking into account his service in the Officer Training Corps whilst at Cambridge University, he was therefore commissioned as a 2nd Lieutenant in the Royal Field Artillery on 10 October 1914 and appointed to 103 Brigade RFA. 103 Brigade was part of the newly formed 23rd Division of Kitchener's ‘New Army' (so-called to differentiate this newly formed army of (war-service only) volunteers from the ‘old'  regular army).

Training the raw recruits began in earnest. Beginning his training at Mytchett Camp in November 1914, Ronald moved to Eweshot and then Shorncliffe in Kent before, finally, being stationed at Bordon in Hampshire in May 1915 where he underwent specialist gunnery training on the nearby artillery ranges for the next two months. In August 1915, his division was finally deemed as ready for active service and forewarned for service overseas.

On 27 August 1915, Ronald landed at Boulogne and, after a few days preparation in the rest and training camps in the area, moved towards the frontline in the Armentieres sector near the French/Belgian border. For Ronald, his first taste of action was soon to follow when, after being temporarily attached to the 8th Division, the guns of his brigade were called into service on 25 September 1915 to assist the 8th Division in their assault in the Bois Grenier sector which was designed as a diversionary action to draw German reserves away from the main attack area during the ill-fated Battle of Loos.

After return to the 23rd Division following this action, the next months were spent in the Bois Grenier sector in general ‘trench holding' duties (responding to German raids, target elimination, wire-cutting, counter-battery fire and general harrassment, etc). On 31 January 1916 Ronald was promoted to full Lieutenant and a move to the Carency sector (north of Arras and to the west of the (soon to be) famous Vimy Ridge). A relatively quiet time was spent in this sector with two exceptions. Ronald was in action between the period 21 - 24 May 1916 when the neighbouring 47th Division came under heavy German attack from Vimy Ridge and needed assistance from the 23rd Division artillery, and on 1 June 1916 when they were once again called in to support a 47th Division counter-attack. Relief from action came on 11 June 1916, however, and 103 Brigade was moved into the rear areas for rest, refit and intensive training at Chamblain Chatelain (known as ‘Charley Chaplin' to the troops).

This period out of the line was only to be short respite, however, as by the end of June 1916, Ronald's battery was in action once again. This time he took part in the preliminary bombardment for the Battle of the Somme in the area of la Boiselle. Co-incidentally, Ronald's brother William, who was by now a Captain in the 16th Bn Manchester Regiment (the ‘Manchester Pals'), was serving just a couple of miles to the east of these positions. William was to die in action on the second day of the battle, thereby making Ronald chairman of Messrs.Johnson, Clapham & Morris from 2 July 1916). After assisting in the 23rd Division's capture of Contalmaison on 9 July 1916, Ronald's brigade was in almost constant action for much of the remainder of the Somme battle (although there was a short period of rest in the ‘quiet' Ploegsteert sector for a couple of weeks in August 1916). For Ronald, however, his battle was to be cut short for, on 19 September 1916, he was wounded by a rifle bullet to the left ear as he approached an artillery Observation Post near the ruins of the village of Martinpuich.

After being treated at a local Advanced Dressing Station, he was removed from the line and sent to Nr 1 Red Cross Hospital at Le Touquet near Boulogne for further treatment. Here, it was decided that his injuries were severe enough to require his evacuation to the UK and, so on 24 September 1916, Ronald was returned to Dover on board the hospital ship H S Dieppe.

Whilst in the UK, Ronald was treated at Endsleigh Palace Hospital and Caxton Hall (both London) and  2nd Western Gen Hospital, Manchester but was struck down with facial boils and an abscess whilst undergoing treatment. This necessitated a further operation in October 1916 and he wasn't passed as fit for duty until 21 November 1916. After a short spell of leave, Ronald returned to duty and proceeded back to France (Southampton - Le Havre) on 11 December 1916.

After a short period of instruction at the Second Army Trench Mortar School at Leulinghem, Ronald returned to the 23rd Division's sector at Zillebeke where preparations had begun for the forthcoming Battle of  Messines. As DTMO of the 23rd Division, part of Ronald's responsibilities was to co-ordinate the targetting, fire-rate and positioning of the heavy Trench Mortar batteries of the divisional artillery with the lighter batteries of the infantry nearer the front: a particularly dangerous job in the run-up to a battle.

During May 1917, German artillery was especially active on parts of this front (Ronald's old brigade being hit particularly badly mid-month) and, on 29 May 1917, whilst travelling from the more exposed locations near Zillebeke Lake to inspect the mortar positions in the ‘Hill 60' vicinity, Ronald was hit and mortally wounded by a German shell. He received immediate medical attention at the spot where he fell, but he died whilst in transit to a Field Hospital near Brandhoek. A small military funeral was conducted in the evening of 29 May and he was laid to rest next to one of his friends who had been killed several days earlier (one of the victims of the German bombardment on 103 Brigade). Ronald's mother was informed of his death the following day.

For his services, Ronald's mother (in March 1922) received his medal entitlement of 1914-15 Star, British War Medal and Victory Medal. She was also to receive a commemorative ‘Memorial Scroll' and Plaque (commonly known as the ‘Death Penny'). Together with his grave at Brandhoek Military Cemetery, Belgium (Plot II, Row D, Grave 1),  Ronald is commemorated on the Dunham (St.Mark's) war memorial and the Kings College, Cambridge War Memorial. He is also mentioned in the Cambridge University Book of Honour and has a laboratory - the Johnson Chemicals Labs - named in his honour at Adelaide University, Australia. There are also, of course, the Ronald Johnson Playing Fields in Moston which were purchased on the behalf of (and with the agreement of) the workers of Johnson, Clapham & Morris in the stead of the distribution of shares that was requested in Ronald's will of 7 December 1916. The playing fields were opened on 17th June 1922.

It is expected that Ronald's memory will live on after the building of the new ground as there has been talk of erecting a plaque in his memory and retaining the memorial gates upon which he is named.