Written by Andrew Faulkner
Republished with permission of the Sunday Mail, Adelaide, and advertiser.com.au

IT’S our own Saving Private Ryan story. The story of how a family salvaged something from the mud and blood and tears of Passchendaele, on the Western Front.

How a mother, disconsolate after having two sons killed in the space of a fortnight, dared to write to the Australian Corps commander, General William Birdwood, pleading for their third boy to be spared the same fate.

“I hope you will forgive me the liberty I am taking in sending this to you,” wrote Eva Bishop.

The “liberty” she requested was for Private Lloyd Bishop to be sent home to help his father in their Basket Range strawberry patch, in the Adelaide Hills.

“It is because his poor father, who is a market gardener, is so broken up at the loss of our 2 sons.”

Gunner Walter Bishop died on September 23, 1917, from wounds he received at the Battle of Menin Road.

Sergeant Alfred Bishop was killed in action at Broodseinde on October 4.

(After two visits in a fortnight, little wonder that Eva never talked to the local minister again.)

“Their father is 58 years of age and getting almost too old to do the work in the garden,” she wrote in her pleading letter to Birdwood.

“If you could see your way to grant my request it would be such a relief.

“We are only poor folks and cannot afford to pay anyone to do this for us or I should not have troubled you.

“Oh, I pray do try and spare him and I will bless the name of General Birdwood forever.” 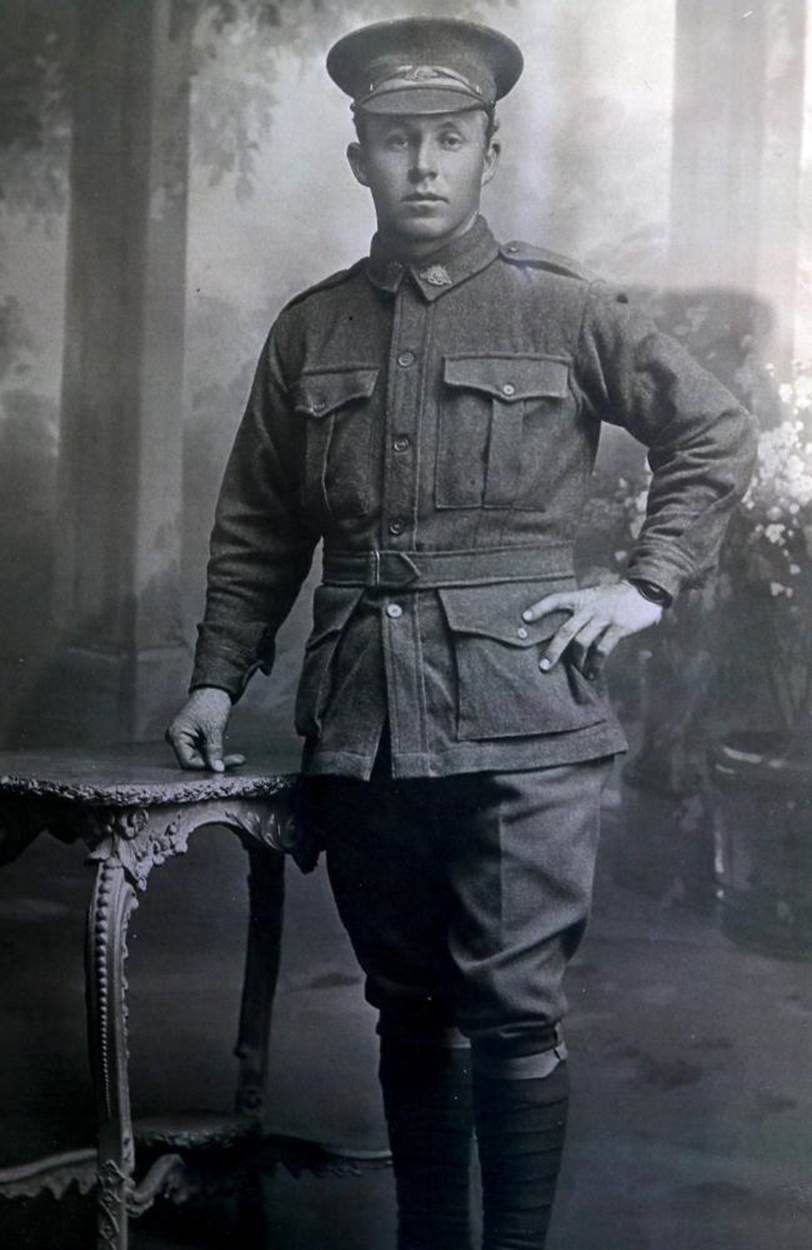 Whether Mrs Bishop blessed the general’s name forever is unknown, but the request was granted — Lloyd was sent home.

“Birdy”, the man so beloved by the original Anzacs and those who followed them into battle, told Bishop’s divisional commander, Major-General Joseph Hobbs, to pull Lloyd from the battlefield.

The order passed down through the ranks to the brigadier, the 32nd Battalion’s commander, the company commander and finally to Lloyd’s platoon officer, sergeant and section commander. 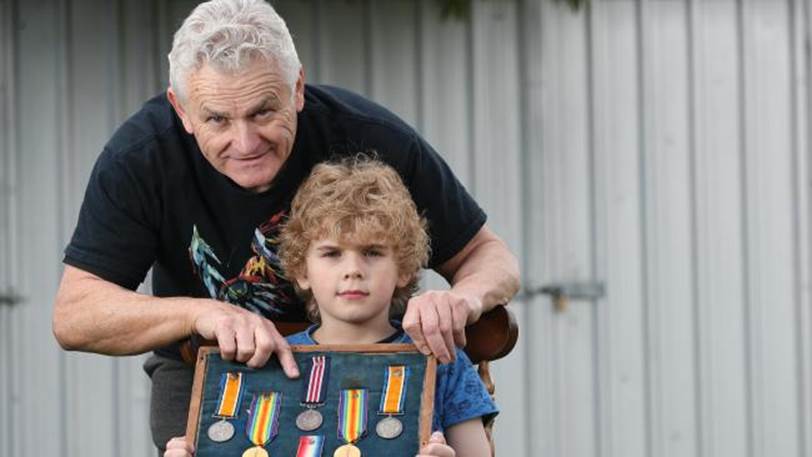 Alan Bishop with his forebears’ medals which will be passed down to grandson Hamish, 8. Picture: Tait Schmaal

His salvation was something, at least, for the Bishops who, like so many other families, lost so much in the latter half of 1917.

The Third Battle of Ypres (pronounced ee-prah although the troops at the time called it “Wipers”) was the official name of the campaign to seize the Belgian ports from the Germans. It is better known as Passchendaele.

There’s bitter irony in how the major World War I killing fields have such poetic names.

Fromelles, or as it was formerly known, Fleurbaix, is too pretty a word for the site of the darkest day in Australia’s history.

Passchendaele is perhaps the most liltingly beautiful. It was also the biggest killing field of them all.

More Australians died in this corner of Belgium than anywhere else in World War I.

The final toll was 38,000 killed wounded or captured, and that’s only counting the main battles in September/October, a period of eight weeks.

That’s 12,000 more than the toll in the eight-month Gallipoli campaign. 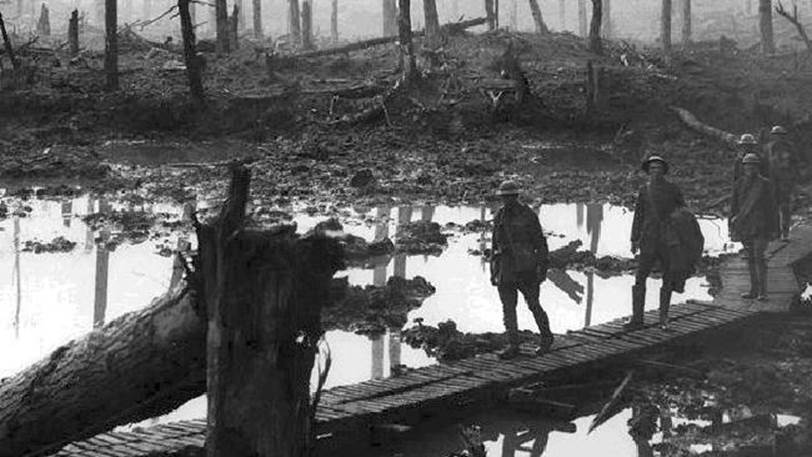 So if you have a relative killed in the Great War, chances are the centenary of his death falls in the next few months.

He is very likely buried in one of dozens of cemeteries around Ypres — the magnificent walled and moated medieval town that was reduced to rubble in 1917.

If his grave is lost, or he never had one, his name is on the Menin Gate, where every night at 8pm buglers from the town’s fire brigade sound the Last Post. They have done so since 1928, other than a brief intermission from 1940-44 (for obvious reasons).

The gate features in perhaps Australia’s best-known war painting, Menin Gate at Midnight, in which Will Longstaff imagined translucent ranks of the dead rising from the fields and marching to the front. 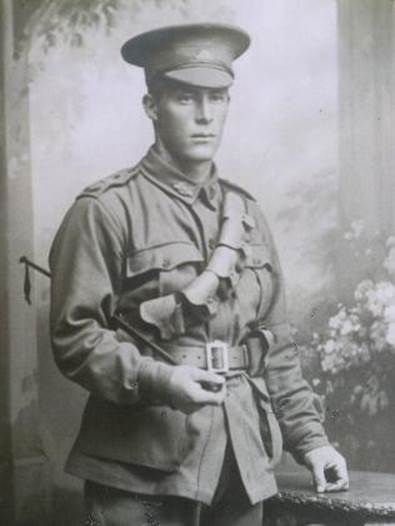 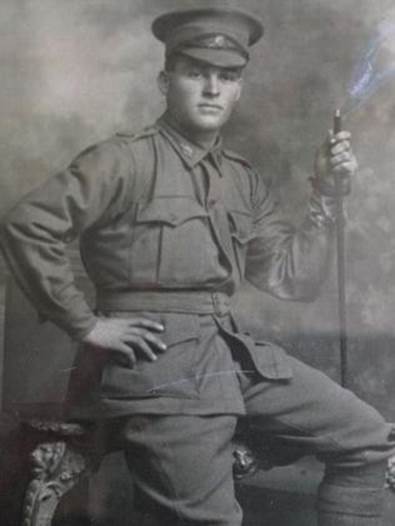 Sgt Alfred Bishop is marching with the lost legions. He is among the 6198 Diggers remembered on the Menin Gate walls.

His medals — including his Military Medal awarded for his heroism on day one of the Third Battle of Ypres — have passed down the generations to Alan Bishop, 58, of Morphett Vale.

Alan’s grandfather, Victor, the youngest of the four Bishop brothers, was too young to go to World War I. The medals went to him when Lloyd died in 1951, apparently at Lloyd’s request. 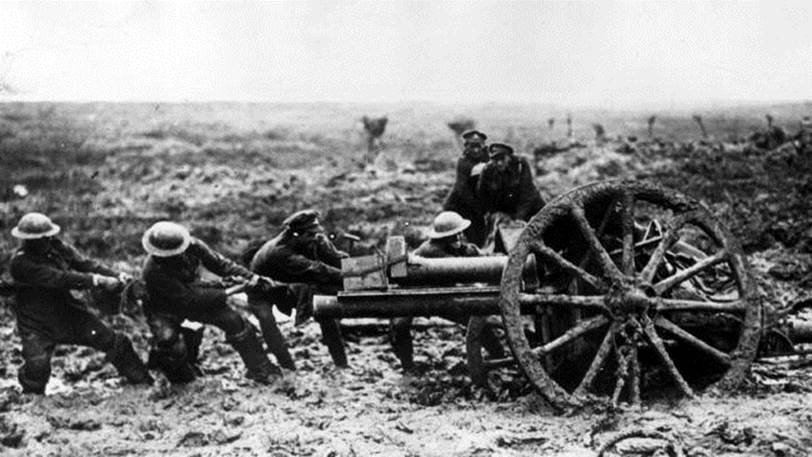 Soldiers hauling a field gun out of the mud during the Battle of Pilckem Ridge, near Ypres.

Did he want the family line that was spared the horror to bear the Bishop torch?

When Alan dies the medals will go to his eight-year-old grandson, Hamish.

“I was 13 when they passed down to me,” Alan told the Sunday Mail this week.

“I thought ‘Gee, that’s nice’, without really understanding what it meant because I was so young.

“All I know is I’m glad I wasn’t one of them. When you look at Alfred’s record, he was in and out of hospital with bronchitis and pneumonia. So they were fighting the weather as well.

“They’re never forgotten. They’re always in the back of your mind.”

Born in 1888, Lloyd was the eldest of the three fighting Bishops.

He and Alfred, the second son, enlisted about the same time — Lloyd’s army number was 249 and Alfred’s was 235.

Alfred was wounded early in the attack but fought alongside his mates all day in a herculean display that earned him the Military Medal.

“He showed wonderful initiative and this, combined with his devotion to duty, inspired his men and turned a critical situation into a success,” the battalion diary recorded. 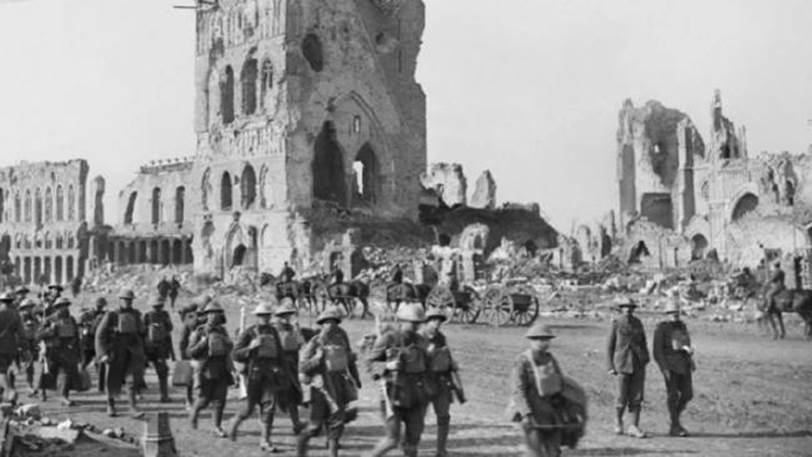 Troops passing the ruins of the famous Cloth Hall at Ypres, on their way to the front line. Picture: Australian War Memorial

As the Diggers dashed across the 100m of no-man’s land, the casualties quickly mounted.

When the men faltered in the face of a fusillade of grenades, A Company commander Lieutenant Francis Tucker, a farmer from Denial Bay near Ceduna, rallied the troops.

When Tucker was wounded, Lieutenant Keith Dunstan, an orchardist from Waikerie, filled the breach.

Pity the unlucky Diggers charged with attacking No 13 post, a ruined windmill on the high ground. Ringed with wire and steeled with concrete, the windmill was hard to penetrate.

The defenders laid down a withering fire and soon the senior Australian officer, Lieutenant William Harrington, a clerk from Prospect, fell as did the first wave’s two senior sergeants.

Corporal Errol Roberts, a railway porter of West Torrens, took over to drive home the attack. Roberts was awarded the Distinguished Conduct Medal.

The Diggers captured the windmill then beat off three counterattacks but not a fourth. Not to be outdone, Sergeant George Rayner, a novice priest of Glenelg, led 40 men in a flanking assault to recapture the strategic post, wiping out the enemy.

He was awarded the Distinguished Conduct Medal, mentioned in dispatches and commissioned.

The 43rd’s official death toll was 35 but was likely much higher: of the 535 who attacked, 221 were listed as casualties. 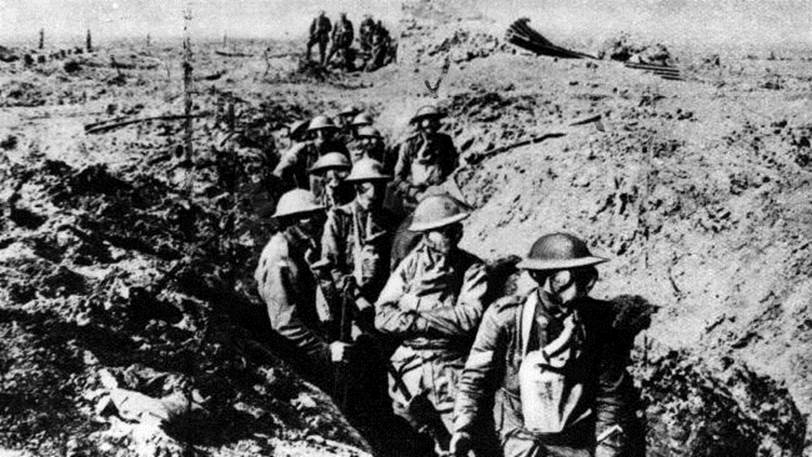 The soaked and mud-caked survivors collapsed into the tents behind the lines. “The men slept as peacefully as if reclining on feather beds,” the battalion diary recorded.

After a long sleep, and dressed in only underwear and greatcoats while their uniforms were washed, they excitedly dissected the events of the day before.

“At least six will talk at once in each tent. You are amazed at their vitality and their keenness. With such assaulting troops no windmill would be impregnable.”

For the Australians, Ypres’ first blood had been shed. It would flow all the way into November at the battles of Menin Road, Polygon Wood, Broodseinde …

Seven Australians were awarded the Victoria Cross during the campaign, including Reg Inwood, whose medal is on display in Adelaide Town Hall.

Thousands received a cross of wood, not bronze. Still others — blown to pieces by shells or lost in water-filled shell-holes — didn’t even get a cross.

Men such as Private Edgar Packer, killed at the windmill, 100 years ago this week. His CO described Packer as “nearly six feet high” and made of “ the right stuff”.

“A stranger seeing him would immediately associate him with the type of man who, in the early days, made Australia what it is.”

Lest we forget Private Packer, and all the other lost boys of Ypres.