The life story of our 8th Prime Minister, Stanley Melbourne Bruce, is quite an interesting tale. Before the war he was a successful businessman and barrister living in London but with deep roots in Australia. By the end of the 1920’s he had been Prime Minister of Australia for nearly 7 years. He later went on to have a successful diplomatic career and to sit in the British House of Lords as a Viscount, having a great influence beyond Australia. How he got there is quite remarkable. 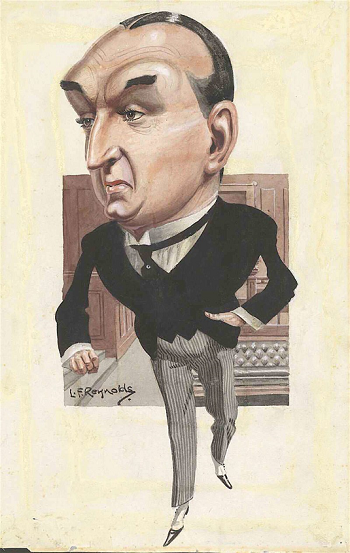 Caricature of Bruce as Prime Minister.

Stanley Bruce was born on the 15th of April 1883 in Melbourne to a wealthy family of Scottish and Irish heritage.  He went to school at Melbourne Grammar School. Once he had reached adulthood, Stanley, with the help of some loaned money, enrolled in Trinity College, Cambridge where he studied the law as well as became a member of the University's rowing team. Upon graduation he began working for his family's successful importation business and became a barrister working in London. His work as a lawyer also took young Bruce to Mexico and Columbia, where he gained an interest in international affairs. 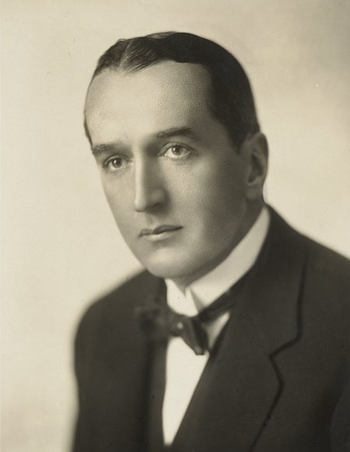 Upon the declaration of war in 1914, Bruce and his brothers all sought to enlist in the armed forces but decided to enlist in the British army rather than the Australian Imperial Force. Bruce received a commission as a Lieutenant and was attached to the 2nd Battalion, Royal Fusiliers in Egypt.[i] The unit subsequently joined the ANZACS on the Gallipoli peninsular.

Bruce's regiment landed at Cape Helles in mid-1915, where he fully distinguished himself in the construction of trenches and as an able commander. His battalion suffered heavy casualties over the coming months, and Bruce himself was wounded on 3 June by a shot to the arm, though it was this injury that spared him from a major assault by his battalion on 4 June in which many of his peers perished. He later reflected that he must have been kept on earth for some purpose. He returned to the front lines and his division moved to the new front at Suvla Bay, where it was involved in particularly heavy fighting and sustained trench warfare throughout August and September. Bruce received the Military Cross and the Croix de Guerre for his service during these months and rose to the rank of captain on 5 August. He was wounded again on 26 September, this time by a shot to the knee, which left him crippled for several years and forced him to return to England to recuperate, while the rest of his regiment were transferred to France after the abandonment of the Gallipoli campaign.[ii] 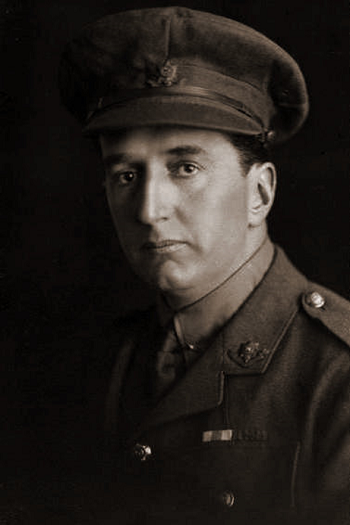 Captain Bruce of the Royal Fusiliers during the First World War.

In September 1916, Bruce sought to resign his commission and return to Australia to resume management of the family business. The War Office refused his request but granted him leave to return to Australia while recuperating from his injuries. As a decorated soldier on crutches with a gift for public speaking, he was enlisted to become a spokesperson for government recruitment in Australia. His success and popularity in this role brought the attention of the Nationalist League and then Prime Minister Billy Hughes, who lobbied the British government on his behalf and succeeded in convincing the War Office to allow Bruce to relinquish his commission in June 1917. 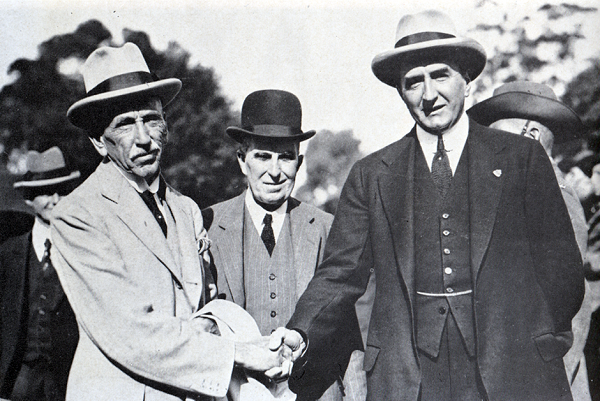 It was not long until an opportunity came up and Bruce found himself running for the Nationalist Party in a May 1918 byelection in the seat of Flinders. After extracting the promise from Prime Minister Billy Hughes that preferential voting would be introduced, which it was later in the year, the newly emerging Country Party withdrew its candidate and allowed Bruce to easily win the reliably conservative seat.

The first few years of Stanley Bruce's time in Parliament were relatively quiet. In 1921 he was appointed as an Australian representative to the League of Nations where he advocated disarmament. Upon returning from Europe later that year, Hughes offered him the position of Minister for Trade and Customs but Bruce declined stating a potential conflict of interest with his importation business. Hughes offered the position of Treasurer instead.

At the 1922 Federal election, a major political shock occurred. The introduction of Preferential Voting a few years before had made it safe for conservative voters to split their votes between the Nationalist Party and the new Country Party. In the 1919 election the result was 9 Country Party members and the Nationalists falling to exactly half the chamber. Billy Hughes remained in office, but only just. In 1922, the Country Party won 3 more seats and the result was a hung Parliament with no party strong enough to govern alone. With such a strong political position, the Country Party under Earle Page made their demands known for a coalition with the Nationalists. Billy Hughes was to be replaced by Stanley Bruce and the Country Party were to take almost half of the ministries. The modern “Coalition” that has existed in Australian politics almost continuously since, both in government and opposition, was born.[iii] 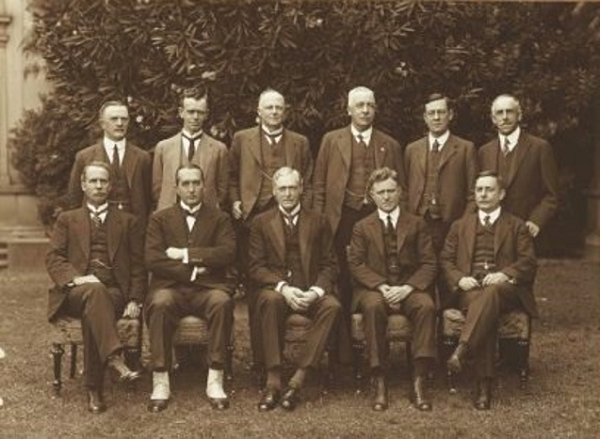 As the new Prime Minister, Stanley Bruce was much more friendly to the conservative base of the Nationalists and Country Party than Billy Hughes, who until 1917 had been a member of the Labor Party. Bruce's appointment as prime minister marked an important turning point in Australian political history. He was the first prime minister who had not been involved in the movement for Federation, who had not been a member of a colonial or state parliament, and who had not been a member of the original 1901 federal parliament. He was, in addition, the first prime minister to head a cabinet consisting entirely of Australian-born ministers. Yet Bruce himself was frequently caricatured in public as "an Englishman who happened to have been born in Australia". He drove a Rolls-Royce, wore white spats, and was often seen as distant and lacking the common touch, characteristics that did little to personally endear him to the Australian public.[iv]

Some of the achievements of the Bruce government include the introduction of Compulsory Voting in 1924, the moving of the national capital from Melbourne to Canberra in 1927 and a modernisation of the machinery of government. A record 22 Royal Commissions reported to the Bruce Government. 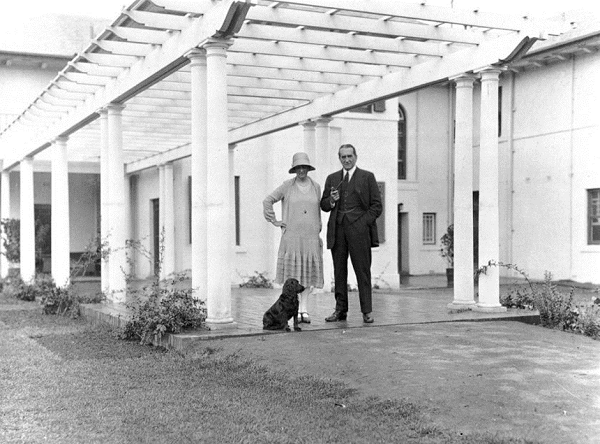 Stanley and Ethel Bruce after moving into The Lodge, 1926. The Bruce's were the first Prime Ministerial family to live in the house.

In 1929, Stanley Bruce proposed that State powers over industrial relations should be handed over to the Commonwealth government. He argued that militant unions including the Waterfront Workers Federation were damaging the economy and that strong federal action was needed. The opposition to the proposal, which the Prime Minister introduced to the parliament as the Maritime Industries Bill, was swift and strong. The second reading of the Maritime Industries Bill passed by only four votes, with Hughes, Edward Mann and George Maxwell voting against the government. Hughes moved an amendment to the bill that stipulated it should only take effect after being approved by a referendum or general election. Bruce ruled out any referendum, stating that the amendment would constitute a vote of confidence in his government and urged his party to vote it down. Nationalist MP Walter Marks and Independent MP William McWilliams joined the opposition, giving the opposition a one-vote majority. With no choice, Bruce called a snap election.

The government was roundly defeated on 12 October, losing more than half its seats in parliament. To add to his humiliation, Bruce was defeated in his own seat of Flinders by Labor challenger Jack Holloway. Bruce was the first sitting prime minister to lose his own seat, a feat which would not be repeated until 2007. In defeat, he stated

"The people have said they do not want my services, and I am going into the banishment to which they have sent me."[v]

A few years later, in 1933, the banishment ended when Stanley Bruce was appointed as the Australian High Commissioner to the United Kingdom, a diplomatic role he would hold until 1945.[vi] Throughout his tenure, he worked with numerous Australian and British governments, both Labor and Conservative. During the 1930's he was particularly close to British Prime Minister Stanley Baldwin and during this time he often represented Australia at League of Nations meetings. He was noted to be influential in calling for the abdication of Edward VIII in 1936. 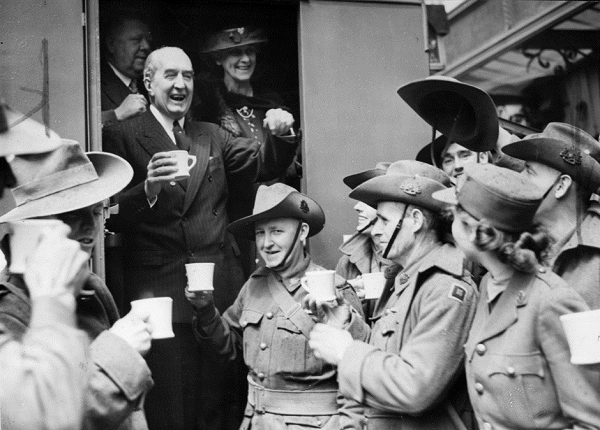 During the Second World War, Stanley Bruce pushed for greater military independence for Australia. Eventually he gained a seat in the War Cabinet as an Australian and Dominion representative. He reportedly did not get on well with Winston Churchill and the two regularly clashed. Bruce resigned from the War Cabinet in May 1944 disillusioned with Churchill's leadership. Despite his relationship with Churchill, Bruce was held in high regard by many cabinet members, particularly future British Prime Ministers Clement Attlee and Anthony Eden, and his determination to advance dominion interests during the war years earned him high praise from John Curtin and the other Dominion Prime Ministers.[vii]

After the war, Stanley Bruce became the chairman of the newly formed United Nations body, the Food and Agriculture Organisation. He was also elevated to the British House of Lords on the recommendation of the Labour Prime Minister Clement Atlee as Viscount Bruce of Melbourne.[viii] He would be an active participant in the chamber, attending regularly right up until his death. Bruce used it as a platform to continue to campaign on international and national social and economic questions, and to promote recognition and representation for Australia within the Commonwealth, though by this time Australian and British interests were becoming increasingly far apart, and the British Empire was rapidly disintegrating. He died in London on 25 August 1967 at the age of 84. He was the last surviving member of Billy Hughes' Cabinet. His memorial service was held at St Martin-in-the-Fields and was widely attended, including by representatives of the Royal Family. His ashes were scattered over Lake Burley Griffin in Canberra. As he and his wife Ethel had no children, the Viscountcy of Melbourne was extinguished. 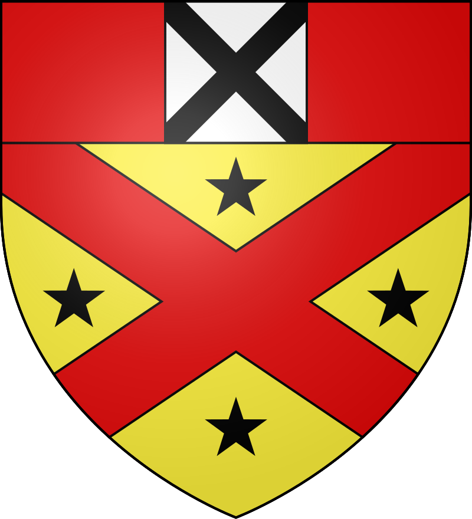 Arms of Viscount Bruce of Melbourne