Tasman Leonard Williams grew up on Main Street in Derby, Tasmania. He was the son of John James Williams and Lavinia Mary Williams. He enlisted in the RAAF in Launceston on the 19th of June 1942 at 18 years of age. He trained as a Wireless Operator/Air Gunner (WAG) under the  Empire Air Training Scheme (EATS) in Australia and Canada. 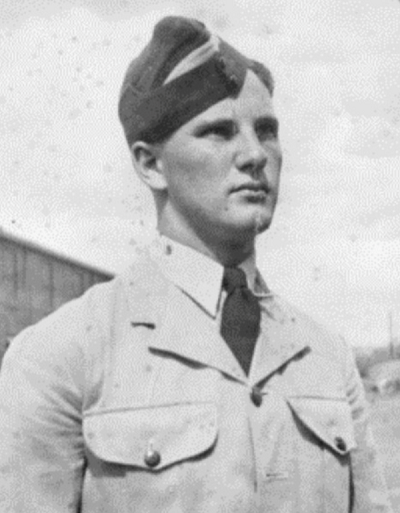 In May of 1943, Tasman was promoted to Pilot Officer. Later that month, he embarked from Sydney to the United Kingdom. He arrived on the 6th of July, 1943. His initial posting was at No. 11 Personnel Dispatch and Reception Centre (PDRC) in Brighton. Pilot Officer Williams was then transferred to Dumfries in Scotland, where he continued his training at No. 10 Advanced Flying Unit (AFU). The remainder of his training was completed with No. 20 Operational Training Unit (OTU) at the Royal Air Force Lossiemouth airfield in north-eastern Scotland. No. 20 OTU was used to train night bomber crews. The instructors at Lossiemouth operated in Halifaxes or Wellingtons. It was here that Pilot Officer Williams was taught to operate the machinery inside a Halifax heavy bomber. He most likely operated on the newer of the Halifax aircraft, which entered into service in early 1944, and housed only one 0.303 inch machine gun on a flexible mount. This adjustment was made to the Halifax bomber so it could carry its full bomb load of 13,000 pounds (5,900 kg).

Pilot Officer Williams was first posted to No. 102 Squadron (RAF) (nicknamed ‘Ceylon’ Squadron) on the 24th of May, 1944. The main job of the Squadron in 1944 was to attack rail targets in France in preparation for the D-Day invasion. Tasman was still attached to the Squadron during the invasion of Normandy. In August, Pilot Officer Williams was transferred to No. 466 Squadron (RAAF) at RAF Station Driffield, Yorkshire. No. 446 Squadron had spent much of June and July supporting ground forces in Normandy, as well as attacking V1 flying bomb and V2 rocket launch sites. When Tasman arrived in August however, the Squadron had returned to their main role as strategic bombers against Germany.

On the night of the 15/16th of October 1944, Pilot Officer Williams and his crew embarked on an operational sortie over Wilhelmshaven, Germany. Operating the Halifax bomber (serial number MZ299) with him was a crew of Flight Officer Albert Henry Munroe (Pilot), Pilot Officer Ernest Thompson (Bomb Aimer), Flight Sergeant Harvey Roy Harris (RAF) (Navigator), Pilot Officer William Stones (RAF) (Flight Engineer), Flight Sergeant George William Dawson (RAF) (Rear Gunner) and Sergeant T. W. M. Kemp (RAF) (Mid Upper Gunner). The crew failed to return to base, and were later reported missing. Having heard nothing of the crews’ whereabouts, they were presumed dead a week later. In a letter home to his parents the day after he was reported missing, Wing Commander H. W. Connelly wrote of Pilot Officer Williams’ “resolution and efficiency;’’ and described the crew’s efforts as “an inspiration to us all.” At the completion of the war, a report from the Missing, Research and Inquiry Service confirmed that the MZ299 crew had crashed landed at at Jackstede, 18 miles from Wilhelmshaven, most likely due to enemy interference. Pilot Officer Williams was killed, along with 5 of his crew members. Sergeant Kemp (who was, in reality, a Polish soldier with the real name W. Kempka) had miraculously survived the crash, only to become a Prisoner of War in Germany. 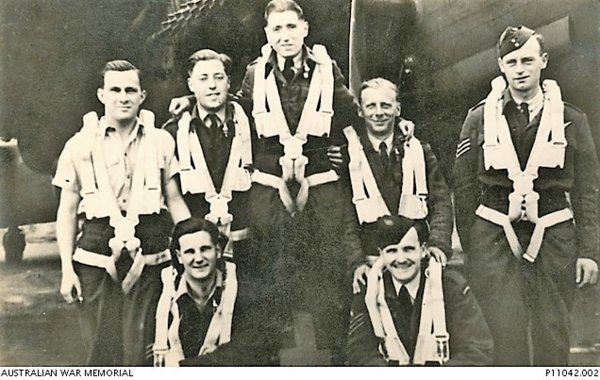 Tasman and his crew-members

The Australians Ernest Thompson, Henry Munroe and Tasman Williams were all buried in Wittmund Cemetery, plots 189, 191 and 194 respectively. Unfortunately, the remains of Harvey Harris, William Stones and George Dawson could not be individually distinguished in the wreckage, but were buried nonetheless. The bodies of the crew members were later moved to the Sage Cemetery in Niedersachsen, Germany.

Just weeks before he was killed, Pilot Officer Williams wrote home to his mother, assuring her he would be home soon after fighting had ceased in Europe. He also informed her of his intentions to leave his bicycle to one R. W. Gandy of Hampton Wick in Surrey (Details on R. W. Gandy, possibly a friend Tasman had made while serving in England, could not be located) if anything were to happen to him. Lavinia Williams considered this a sign of things to come, and unfortunately her hunch was correct. She asked that her sons possessions be returned to her in Tasmania, aside from the bike, which she hoped R. W. Gandy would treasure as a reminder of his late friend.

On the 75th anniversary of Pilot Officer Tasman Leonard Williams’ death, we too will remember his bravery and the inspirational service of the Halifax MZ299 crew.