THE ANZAC SPIRIT - Alive and well in our young people

THE ANZAC SPIRIT
Alive and well in our young people

Recalling my trip to Turkey in 2002 and the dawn service at ANZAC Cove and later at Lone Pine I still believe it was the most emotional ANZAC day I have ever experienced. I went with Fred Pryde an 82 year old Buna veteran (now deceased) and Garry Davis, a Nasho who was in my platoon in Vietnam (I was the Platoon Sgt). 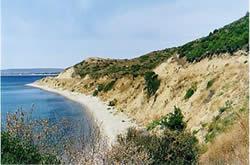 I still vividly remember us discussing how proud we felt when we saw the thousands of young Australians and New Zealanders at the services. They demonstrated a deep interest in the tragic events that took place in the area commencing on the 25th April 1915. All of the young people we met, Australians, New Zealanders, and Turks had marvellous attitudes.

Many of these young men and women wept during the services and this touched us deeply. We wore medals to the services and the respect and interest shown to us by these young people was truly humbling. They demonstrated a deep sense of pride and gratitude in being descendants of those heroic men who fought so desperately and for so long in what must have been the closest thing to hell I can think of.

We saw countless young people proudly waving and carrying flags, many had them painted on their faces.

During the dawn service at ANZAC Cove my mate Fred, nudged me and whispered "turn around". I turned and saw the first rays of morning sunlight strike the wall of the "Sphinx" just as it would have 87 years earlier. The crowd was huge and included so many young people, some of whom had backpacked from all corners of the globe to pay their respects.

Despite the size of the crowd, when the bugler played the Last Post there was total silence. I could feel the grief in the air; it was electrified with emotional energy.

When we moved to Lone Pine for the Australian Service, the Director of Australian War Graves asked us if we wished to move into the area roped off for dignitaries and veterans and of course, we said, "Yes." 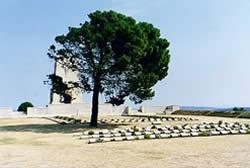 As we walked in to take up our seats, we were mystified when the thousands of people sitting in the bleachers around the edge of the cemetery stood up to clap and cheer. As I took my seat with the other veterans, I asked an old Second World War digger, "What's going on, who are they clapping?" The old man smiled and said, "You mate. They're clapping you. They're clapping every veteran that enters the area." I had a lump in my throat thereafter as each veteran that entered received the same wonderful welcome. When two elderly returned servicewomen, nurses I believe, entered they received a standing ovation from this marvellous crowd of patriots.

Prior to the commencement of the official service there the RAAF band played Waltzing Matilda and other stirring tunes but the song written by Peter Allen, "I still call Australia home" was sung so beautifully by a female band member it had everyone present beaming with pride.

Immediately the young woman finished her singing a young man not far from us yelled at the top of his voice "Aussie, Aussie, Aussie!" The entire crowd erupted with a proud "Oi, Oi, Oi."

During the official ceremony, the (then) Deputy Prime Minister Mr Anderson made a touching and sincere speech about the ANZACS, one of his own relatives was killed at Lone Pine.

I looked across at the only Turkish veteran present as Mr Anderson spoke about how the British Generals had offered the ANZACS gas masks and they'd refused them, saying "we won’t need them, the Turks won’t use gas, we trust them." They were right the Turks didn't use gas. The old Turk was smiling so proudly it was a sight that remains crystal clear in my mind today. Later when asked to lay a wreath on behalf of the Turkish people the crowd gave him a standing ovation and he wept.

At the completion of the service we sat near some Turkish pits along the edge of the road between Chanuk Bair and Lone Pine watching some young Aussies playing two-up, they were betting in the only money they had, millions of Turkish lire. Soon a bus covered in Australian flags stopped and more young Aussies climbed out and onto the roof and joined in the game of "Swy". Fred, Davo and I chuckled among ourselves when we heard, "Can anyone cover this 5 million over here before I let 'em go again?" Fred asked me, "5 million? That's not much more than 5 bucks in Aussie dollars is it?"

I replied, "I don't know Fred, I can't get my head around all these millions yet, but I reckon if we could see ghosts, there'd be thousands of them lined up along the road right now getting their bets on."

These proud young people were filled with the ANZAC Spirit and their respectful and interested behaviour was heart warming. A few minutes later a middle-aged Turk sat by the side of the road with us and in the clearest English asked each of us to explain what our medals represented. He then said, "You know I can't remember the last time I cried, I suppose that's because it was long ago and I was a small child. I love the ANZAC Spirit. Today, as the politicians and the Generals entered the official area there was barely any response, just a few people clapped. When my countryman, the old veteran, laid his wreath, the crowd gave him a standing ovation and I cried." 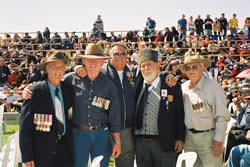