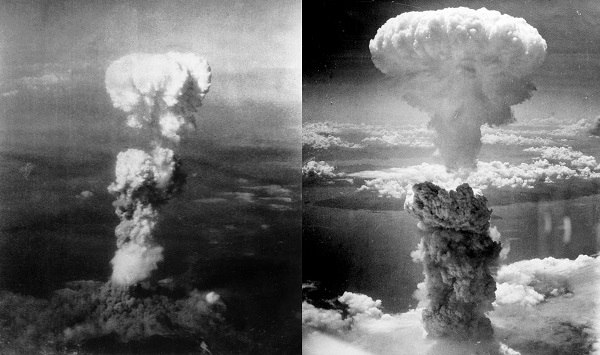 The mushroom clouds rise over Hiroshima (left) and Nagasaki (right). These photos were taken by the American observation planes on the raids.

As Japanese forces retreated across the Pacific in mid 1945, an invasion of the Japanese home islands seemed inevitable. The war had already cost 40,000 Australian lives – if Australians were to be part of that invasion, how many more would die? Was there a way to avoid it?

Throughout the early twentieth century nuclear physics had great strides. Its leading lights were the New Zealander Ernest Rutherford and the Dane Nils Bohr. Like most scholarly disciplines, it was a highly international field. New discoveries were widely publicised to other physicists, and frequent conferences were held at which these discoveries were presented and discussed.

The major universities and research centres were in Germany, Britain and the United States. But German research was thrown into disarray by Hitler’s rise to power, as many nuclear physicists working in Germany were Jewish (or, like Enrico Fermi in Italy, had a Jewish spouse). By the late 1930s most of them were refugees, although there was still a great deal of non-Jewish scientific expertise working for Hitler. Therefore, while nuclear physics as a field was strongly anti-Nazi, Germany had equal access to scientific breakthroughs and the expertise to make use of them.

The turning point in developing the bomb came with the discovery that bombarding a uranium nucleus with neutrons could split it, releasing colossal amounts of energy. This was first done experimentally in December 1938, and was explained theoretically in January 1939.

The fear among the international nuclear physics community was that Nazi Germany, with its scientific and engineering expertise, could use this process to build an atomic bomb. In the US, European scientists approached Albert Einstein – by far the most famous scientist in the world – and used his celebrity to explain the situation to President Roosevelt. Roosevelt took the matter seriously and authorised money and government support for further research and experimentation, although still on quite a small scale.

While the centre of atomic research after 1939 was in the US, work continued to be done elsewhere. The German atomic program was never as serious as the Allies feared it to be and did not get beyond laboratory work. The British had the technical knowledge but not the industrial capacity, and eventually gave everything they knew to the Americans in returned for being party to any decision to use a future nuclear weapon.

A key player in the British-American relationship here was the Australian Professor Mark Oliphant (future Governor of South Australia). In 1940, working with refugee German physicists, he provided a report to the British Government that an atomic bomb was feasible. The British passed this on to the Americans but nothing was done. In 1941 Oliphant travelled to the US and was dismayed to find little was being done on the atomic program. He met with two well-known American colleagues, Ernest Lawrence and Robert Oppenheimer and, in what Oppenheimer later called “an indiscretion”, explained the situation. Lawrence and Oppenheimer got it: they took action and the American atomic program was reinvigorated.

So far, work on an atomic bomb had been entirely theoretical. To actually make one meant solving a host of difficult scientific and engineering problems. Massive quantities of uranium-238 had to be refined to produce just a few kilograms of uranium-235 and even smaller quantities of plutonium. The weapon had to be designed, as did all the specialised containers, measuring devices and safety equipment.

The attempt to do all this began at large scale in late 1942 and became known as the Manhattan Project. Starting from scratch, the Project quickly became colossal. It eventually employed nearly 130,000 people and cost nearly $2 billion – the equivalent of well over $20 billion US today. As a manufacturing complex, it was roughly the same size as the US car industry at the time. It was, furthermore, top secret – even Vice President Harry Truman only learned what the Manhattan Project was after he succeeded Roosevelt in April 1945.

The world’s major source of uranium was the Belgian Congo, and the Allies moved quickly to secure supplies. In 1944, the Australian Government was also asked to contribute uranium for military purposes. We had known vaguely about the atomic program in 1941 (again, on Oliphant’s information), but the small existing uranium mines in South Australia were unable to provide the quantities needed. With Australia unable to contribute, and with the Manhattan Project veiled in secrecy, the Australian Government did not officially know about the bomb until it was dropped. 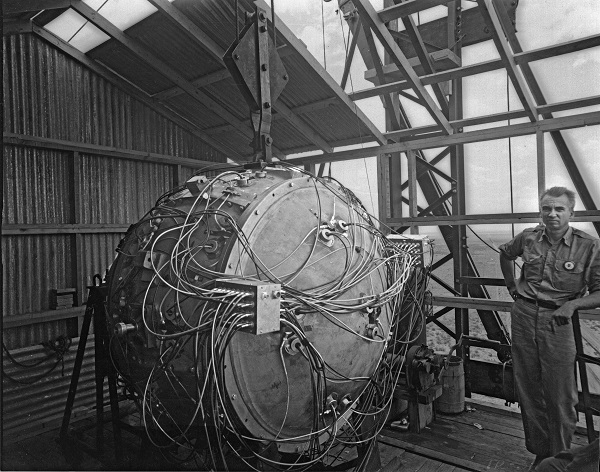 “The Gadget”: everything ready to go before the Trinity test in July 1945.

The engineering works were spread all over the US, but the scientific hub was at Los Alamos in New Mexico. Here, under the direction of Oppenheimer, a large group of scientists worked for years to solve all the problems involved with making and delivering a nuclear weapon. The result was the Trinity test in New Mexico on 16 July 1945. The test worked. The world’s first nuclear bomb detonated with an explosive force equivalent to roughly 20,000 tons of TNT and sent a mushroom cloud 12 km into the sky.

From that point, it was only twenty-one days until the atomic bomb was dropped on Hiroshima, on 6 August 1945. Three days later a second bomb was dropped on Nagasaki. In both cases the single bomb devastated the city: at Hiroshima all buildings within a 1.6km radius of ground zero was destroyed, while fires covered more than 11 km2 of the city. In total, the two atomic bombs probably killed between 150,000 and 200,000 people, about half of those immediately. Luckily, Australian POWs at a camp near Nagasaki received only minor injuries in the blast, although they were put to work carrying the injured.[i] 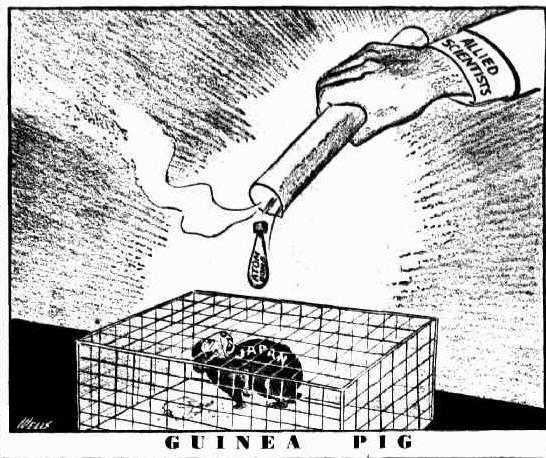 A cartoon exploring the ethical implications of the atomic bomb. The Herald, 8 Aug 1945, p. 4.

On 9 August, the day of the Nagasaki raid, Soviet forces began their invasion of Japanese-occupied Manchuria. Their rapid success, together with this new and incredibly powerful weapon in the hands of Japan’s enemies, persuaded Emperor Hirohito of the need to surrender. His surrender speech was broadcast on 15 August, and the fighting stopped. Australian occupation troops in Japan were based in the Hiroshima area, and witnessed first hand the devastation caused by nuclear weapons.

For the Australian troops patrolling the jungles of Borneo or Bougainville in August 1945, the coming of peace was a blessed relief and they weren’t too worried how it had been achieved. But the world had changed fundamentally. We have lived in fear of that change ever since.