In the minutes before 0420 on the morning of 8 August 1918, officers from General John Monash to Second Lieutenant platoon commanders across the Australian front line anxiously checked their watches as the minutes ticked down.  A terrifying torrent of heavy shellfire erupted along the Allied front, reaching into the German rear areas searching out their artillery and machine gun positions, while the ubiquitous 18 pounders provided the 'creeping barrage' behind which the infantry and tank assault began their advance.

This blizzard of fire and steel heralded the opening of the battle named for the key French city, executing the meticulously prepared barrage and counter battery fire plans supporting the infantry and tank attacks.  It was to be nicknamed by German General Ludendorf as 'der scwharze tag, or 'the black day' of the German Army.  It was also the  opening phase of the Allied campaign later known as the 'Hundred Days Offensive' that ultimately led to the end of the First World War. 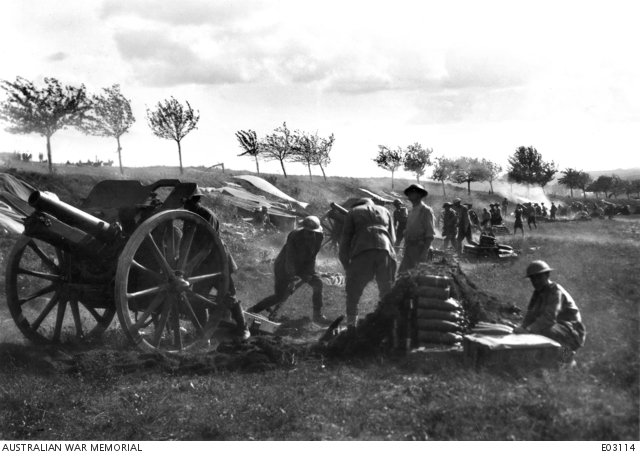 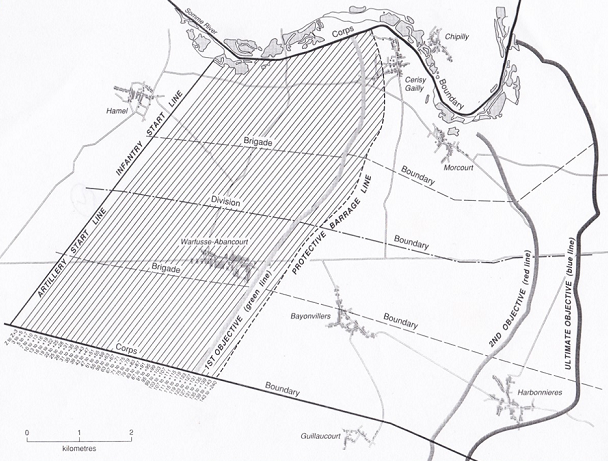 Uppermost image is of 108th Howitzer Battery in action.  They are deployed behind a dyke or elevated roadway which provides them with cover from enemy view and fire.  AWM EO 3114.

The bottom image is a drawing of the Barrage Plan supporting the Australian section of the front immediately south of the River Somme.  The lower boundary is the railway line running from Villers Bretonneux to the SE.  The Canadians operated between it and the Amiens - Roye Rd further south below which was the French 1st Army.  The Green, Red and Blue Lines were the initial, intermediate and final objectives.

Fire was provided by 1,386 field guns and howitzers and 684 heavy guns, belonging to 27 medium artillery brigades and thirteen heavy batteries, in addition to the infantry divisions' artillery (Field Artillery Brigades).  The fire plan for the Fourth Army's artillery was devised by Monash's senior artillery officer, Major General C. E. D. Budworth.  British 'hot wire' sound ranging and artillery survey advances (led by Professor Lawrence Bragg, just 28 years old at the time, originally from Adelaide, who was to be awarded an MC and OBE for his efforts) had dramaticaly improved artillery techniques and together with aerial photographic reconnaissance made it possible to dispense with "registration" of targets, to ensure accurate fire, without compromising surprise. Budworth had produced a timetable which allowed more than 500 of 530 German guns to be hit at "zero hour", while a creeping barrage preceded the infantry.

Men and machines had moved into position under the cover of darkness and deception plans, and in an extension of the techniques demonstrated at Le Hamel one month earlier,  tanks were in the vanguard of the attack.  Their arrival in the Assembly Areas had once again been masked by the noise of aircraft flying low over the battlefield.  Those same aircraft were to play a key role in gathering and returning intelligence information and even dropping supplies of ammunition.

One of the most well known images of the AIF on the Western Front  - Lieutenant Rupert Frederick Arding Downes MC addresses his Platoon from B Company, 29th Battalion on 8 August 1918 during a rest before the advance onto Harbonnieres, the battalion's second objective. They are near the villages of Warfusee and Lamotte, France.  Many of the men in this image were to fall over the following weeks, illustrating the great toll this last phase of the war took on an already depleted AIF.  AWM EO2790

The Battle of Amiens applied an aggregated series of techniques confirmed just one month earlier when the Australian Corps under General Monash had captured Le Hamel in just 90 minutes.  His revolutionary tactics involving what became known as "Combined Arms" operations with tanks, artillery and aircraft all operating in close support of the infantry, paved the way.

The Australians and Canadians (south of the Australians) were the spearhead of the first phase, a role to which the soldiers and commanders quickly adapted and excelled.  The general line of advance was directly eastwards with the Amiens / Roye Road marking the southern boundary with the French.   The British III Corps advanced north of the Somme. 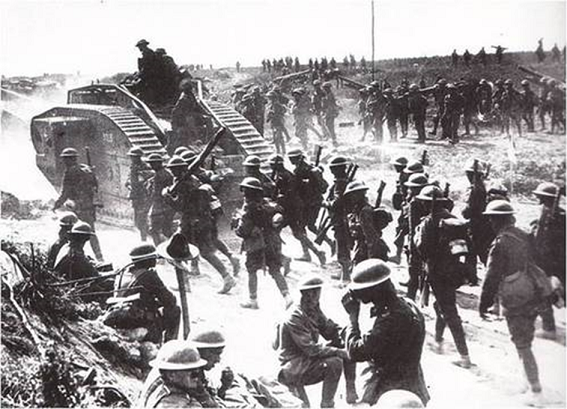 This photograph eptomises the relentless momentum of the Allied advance.  The soldiers in this image are the New Zealand Division operating north of the Somme as part of the British  advance on Bapaume.

The Australian Corps advanced with two Divisions forward, the 2nd and 3rd, towards their initial objective; The Green Line.  The lead divisions had reached this by 7.20am.    At this point the 4th and 5th Divisions passed through the two leading Divisions to continue the advance by 8.20 am.  Infantry-carrying Mk V tanks were to have carried out this phase and brought troops and stores forward.  The Canadians made similar progress south to the Amiens - Roye road.  North of the Somme the ground was more broken and the British III Corps had fewer tanks so progress was slower.

The Germans on Chipilly Spur (see the Barrage map) commanded a wide field of fire to the south of the Somme, and their flanking fire held up the left flank (3rd Division) of the Australian Corps until late on 9 August.  The British III Corps elements designated to take it had stalled,  when a small Australian party slipped across the river and in a remarkable demonstration of indivudal and small team initiative and daring, captured the village of Chipilly itself, and a renewed attack by III Corps particularly the 2/10th London Battalion, carried the spur and secured the 3rd Division's flank.

Five German divisions had effectively been engulfed. Allied forces pushed, on average, 11 km (6.8 mi) into enemy territory by the end of the day.

The advance continued on 9 August, though not with the same spectacular results of the first day.  However incursions by Rolls Royce armoured cars and Whippet Light tanks escorting cavalry caused further chaos in the German rear areas.

On 10 August, there were signs that the Germans were pulling out of the salient created by Operation Michael in March / April.  Even with fewer armoured assets, and less favourable terrain,  the British drove 19 km (12 miles) into German positions by 13 August.

The infantry eventually outran the supporting artillery, which then needed time to re-arm and re-deploy.  The tanks, which had been so instrumental in the success of the advance, had been grieviously depleted; of more than 500 tanks that began on 8th August, only six tanks were left serviceable for battle within four days.  On the Canadian front, congested roads and communication problems prevented the British 32nd Division being pushed forward rapidly enough to maintain the momentum of the advance.

According to official reports, the Allies had captured nearly 50,000 prisoners and 500 guns by 27 August.

The speed, decisiveness and effect of the Allied offensive particularly in the sector south of the Somme (Australian and Canadian sector) completely overwhelmed the German defenders. 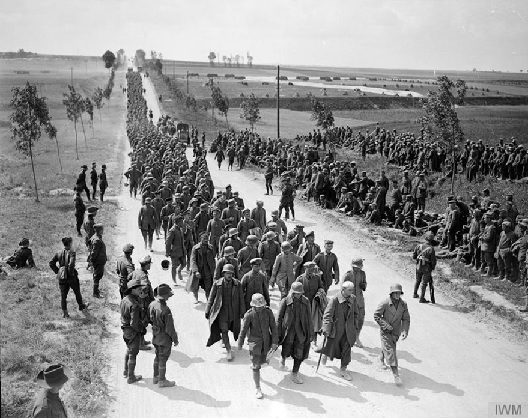 A columns of German PoW being marched to the rear perhaps most emphatically illustrates the result of the Battle of Amiens.  Not just in materiel terms but also psychologically for the Germans, all hope of Victory had now evaporated and the best they could hope for was to try and wrest favourable terms in any final outcome.

It was also notable for the first recorded 'tank on tank' engagement when a number of German A7 machines made a somewhat ignominious appearance against British MkV tanks.  One was captured by the Australians and found its way back to the Queensland Museum.  Named "Mephisto", it is the only surviving WW1 German tank in the world.  Also captured on this day was 12 inch (300mm) German Rail Gun, the barrel of which is in the Austrlaian War Memorial.

Trench warfare had at last been eclipsed by mobility and firepower on the Western Front. The fighting now became mobile and was carried out in open country for the remainder of the war until the Armistice was signed on 11 November 1918.

There are reminders of this period of the war scattered across South Australia.  German artillery pieces captured during this period feature as memorials in Norwood, Rose Park, Unley, Mount Gambier and Jamestown to name a few.  Captured German machine guns were also returned as trophies and are mounted on display in numbers of town around the State. 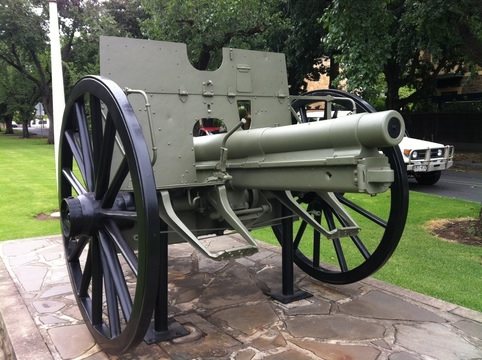 The Rose Park Gun. German 7.7cm Feldkanone 96 (FK96) Field Gun (1896).* One of a battery of German 77mm field guns captured by the 32nd Battalion during the Battle of Amiens that are now located in parks around SA.  This one refurbished by Burnside City Council in the excellent Rose Park Memorial precinct.