On the morning of May 20th 1941, thousands of German Fallschirmjäger (paratroopers) descended over the Maleme Airfield on the island of Crete. They were engaged by New Zealand and Greek forces, who inflicted significant casualties onto the German parachutists and gliders attempting to land. Despite their best efforts, the sheer number of German forces was too much to defeat entirely, and some paratroopers were able to set up defensive positions west of the airfield. Later in the afternoon, second and third waves of Fallschirmjäger, supported by Luftwaffe attack aircraft, dropped at Retimo and Heraklion. They faced fire from British, Australian and Greek forces, as well as the local Cretans. The Battle of Crete is unique in that it marked the beginning and the end of the German airborne force. Over the course of the battle, Axis and Allied soldiers hunted each other in the streets and valleys of Crete, engaging in bloody close combat and the gritty defence of objectives. 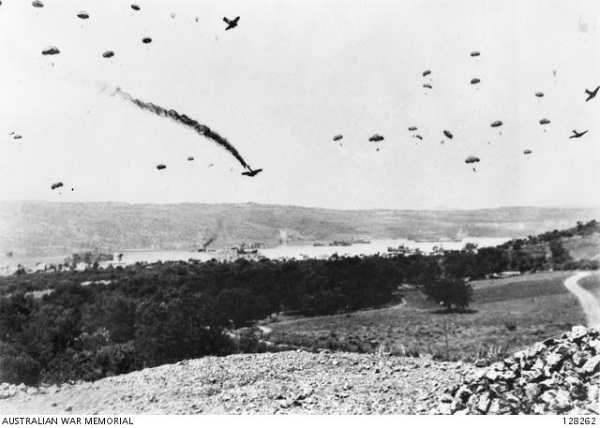 German paratroopers and gliders fill the skies above Crete
AWM - 128262

New Zealand General Bernard Freyberg was entrusted to command the garrison on Crete in April. The contingent consisted of 14,000 British troops originally posted to the island, as well as 25,000 Commonwealth troops evacuated from mainland Greece. Among them were the Australian 19th Brigade and parts of the 16th and 17th Brigades. Most of the Australian troops were tasked with the defence of the region of Retimo and were largely successful in the initial days of attack. The turning point of the battle came at Maleme when German forces gained control of the airfield on the 22nd of May and were able to land substantive reinforcements. The Allies tried desperately to prevent the advance of the Germans, but were driven east to a defence position in Suda. By the 26th, Freyberg reported that the situation in Crete was hopeless and that his men had reached their limit. Communication between the three sectors the Allies were defending had been cut off by the Germans. A breakdown in communications had already contributed to the Allies relinquish of Maleme, and now with the dwindling of food and ammunition supply, retreat was the only option.

Between May 29th and June 1st, more than 10,000 of the initial 40,000 Allied troops on Crete were evacuated by the Royal Navy from the port in Sfakia. Left behind were the 2nd/7th Battalion, who famously fought in the Battle of 42nd Street, as well as 2nd/1st and 2nd/11th Battalions who had provided resistance at Retimo. Many Allied soldiers fled to the mountains and were hidden by locals from German mountain troops for months. Some 600 soldiers escaped, among them over 60 Victorians from the 2nd/11th. 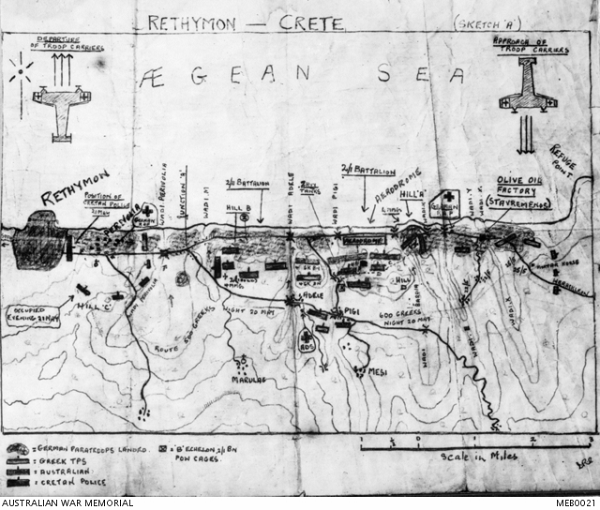 A hand-drawn map from an Australian escapee. It details the area around Rethymnon, including prisoner of war cages and the position of units.
AWM - MEB0021

Crete remained occupied by Axis forces until the end of World War II. Although the Germans were victorious in the Battle of Crete, their success did not come without its consequences. The number of losses of aircraft and paratroopers in battle came as a shock to Hitler, who declared that the airborne force had lost the element of surprise and should be retired for the rest of the war. Germany suffered nearly 6,000 casualties, while the Allies recorded a similar number of deaths, along with capture of over 17,000 prisoners of war. Over 500 Cretan civilians were executed by the Germans.

The Battle of Crete should be remembered as a time where Australians showed remarkable courage and fortitude in the face of overwhelming adversity. Their efforts in withstanding the German onslaught were admirable, and their legacy continues to live on.

References:
Anzacsofgreece.org. 2020. The Battle Of Crete. [online] Available at: <https://www.anzacsofgreece.org/en/virtual-memorial/conflicts/1736-the-battle-of-crete> [Accessed 19 May 2020].

Another article on Crete from our archives is "Battle of Crete: 75 Years On" by Major Christopher Roe.

A third article is "The bayonet: A short, sharp history" by Peter Monteath.

And finally the Podcast "From a whisper to a bang!".