On the 19th of February 1942, Darwin was hit by a ferocious Japanese air raid that saw the destruction of 30 Allied aircraft and 11 vessels, and the death of at least 243 Allied soldiers and civilians.i 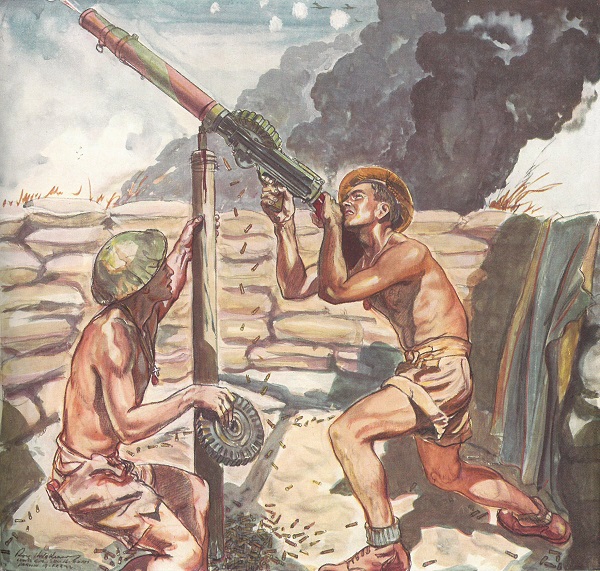 A.A. Lewis Gunners in action against low-flying aircraft during the Japanese air raid on Darwin.
By Roy Hodgkinson, B3/77 from the book Khaki and Green

But why was Darwin, a town of less than 6,000 people with relatively little civil and military infrastructure, targeted so heavily by the Japanese? Despite its unassuming stature, Darwin was a crucial Allied base, supporting ships and planes that formed the basis of the defence of the Netherlands East Indies. In the weeks after the bombing, both Java and Timor fell to the Japanese. In the months prior to the attack, Darwin had been a key part of air ferry routes used by the Americans to reinforce troops in the Phillipines and avoid Japanese routes over the central Pacific. Darwin was Australia’s ‘gateway to Asia’, and its importance was recognised well before the beginning of the war. In 1935, the London Committee of Imperial Defence acknowledged that, in the event of war with Japan, “Darwin will be of considerable importance as an operational base…The probability of an attack…[is] considerable.”

Australia declared war on Japan on the 9th of December 1941 in the wake of the attack on Pearl Harbour. Darwin was now more than ever under immediate threat of attack. Notices to evacuate from Darwin were issued by the Federal War Cabinet on the 16th:

“Women and children must be evacuated from Darwin as soon as possible…Darwin citizens will greatly assist the war effort by cheerfully carrying out all requests.”

Despite predicting that the base at Darwin would be attacked, the city was poorly defended by the Australian Army. Darwin only had 16 3.7-inch AA guns and access to a small supply of Lewis Guns to use against low-flying raiders.ii No 12 and 13 Squadrons stationed in the Darwin area were equipped with CAC Wirraway advanced trainers and Lockheed Hudson light bombers, but none were serviceable on the day of the attack. There were also no radars that could have provided an early warning of attack. It wasn’t until March that a radar system was successfully installed in Darwin, although plans to fly in the necessary equipment were in place at the beginning of 1942.iii The Lowe Commission, appointed after the attack to investigate the raids, concluded that Darwin would have needed “36 heavy anti-aircraft guns and 250 fighter aircraft” in order to have effectively defended itself.

The Japanese conducted reconnaissance flights over Darwin in the week leading up to the first raid. The defenders knew an attack was imminent. On the 19th, 188 aircraft were first sighted over Bathurst and Melville Islands north of Darwin. A message was radioed to the Postal Radio Station in Darwin, and then relayed to the Royal Australian Air Force Operations, but no alarm was sounded because the RAAF officers wrongly assumed the aircraft sighted were 10 USAAF P-40s returning from West Timor due to poor weather conditions.iv

Japanese Zeros arrived over Darwin at 0958, having already shot down a US Navy PBY Catalina and strafed a USAAF C-47 Skytrain on the ground at Melville Island. The first ship attacked was the HMAS Gunbar, and it was at this point that the sirens began sounding in the Darwin township. Stoker 2nd Class Charlie Unmack was aboard the Gunbar, and described the “horrific scenes” in the Harbour:

“Ships [were] on fire, oil and debris everywhere, ships sinking and ships run aground…[All] we had against aircraft was a Lewis machine-gun…the skipper was firing at them with his .45 revolver…he had both his knees shattered by Japanese bullets.”

The ships in the Darwin Harbour and buildings ashore soon came under attack. The USS Peary, HMAS Mavie, USAT Meigs, MV Neptuna, SS Zealandia, SS Mauna Loa and MV British Motorist were all sunk, killing an estimated total of 129 people. At least 21 labourers working on the wharf were also killed, as were a minimum of 34 aboard ships such as the USS William B Preston and HMAHS Manunda that were damaged during the bombing.v Another 10 civilians were lost when a Aichi D3A dive-bomber landed a direct hit on the Post Office.vi The Japanese bombed Darwin’s hospital, civil airfield, army barracks and oil stores, and did not let up until about 1010. 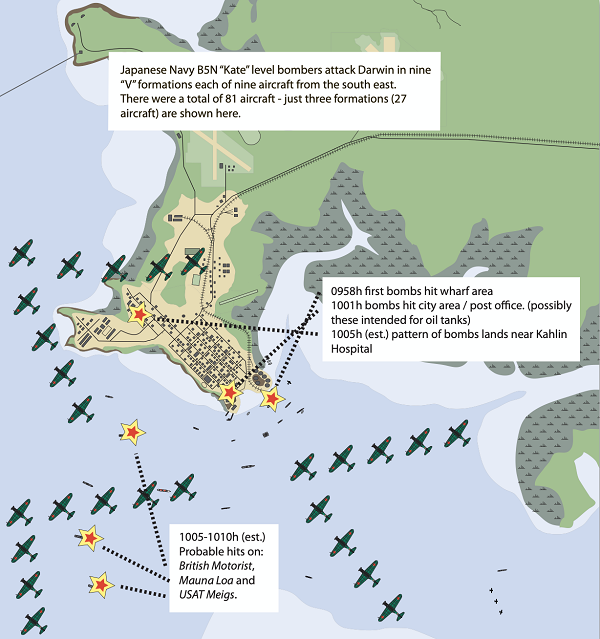 Leading Aircraftman Stanley William Hawker, part of No 2 Squadron, was evacuated from Timor and reached Darwin the day before the bombings. He was loading bombs into a Hudson as he saw the Japanese approaching:

“At first we thought they were American bombers…[then we] identified them as Japanese ‘Betty’ bombers…and all hell broke loose. We had Zero fighters flying over our heads, and we…took shelter up to our necks in the mangrove swamp until someone said ‘What about the crocs!’…The main RAAF ‘drome…was in shambles.”

The Japanese were not finished. At 1158, the sirens sounded again as 54 land based medium bombers were sighted. They attacked the RAAF Base in two formations, dropping bombs simultaneously. The second raid lasted 20 minutes and is thought to have destroyed 30 aircraft and killed 6 RAAF personnel. Among those killed was Wing Commander Archibald Robert Tindal, thought to be the first member of the Australian Air Force killed on Australian soil.vii Wing Commander Tindal, “in a heroic effort to score on the adversary,” began firing a gas operated machine-gun “on top of a trench when he was hit by a cannon shell.”viii The RAAF Base Tindal, located south of Kathrine, is named in his honour.

The night following the attack, LAC Hawker and the other RAAF airmen took rifles and patrolled the cliffs at Fanny Bay in case the Japanese were to land. The spent the next morning “pulling dead bodies out of Darwin Harbour.”

The bombings caused chaos in Darwin. Most essential services, including water and electricity, were damaged or destroyed, and many of the remaining civilians fled. There were reports of looting and desertion, although is it believed many of the ‘desertions’ were as a result of misunderstood orders handed down from RAAF officers.ix 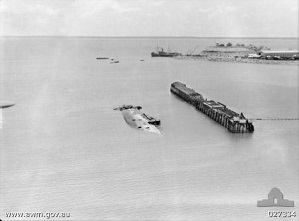 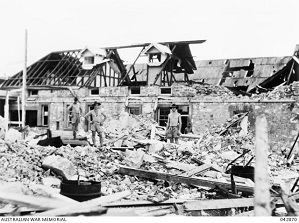 Top: The sunken MV Neptuna and burnt out wharf in Darwin Harbour. Bottom: Australian troops inspecting the damage the day after the bombings.
AWM 027334 and 042870

The total loss of life on the 19th of February 1942 is still contentious. The Lowe Commission estimated 243, but memorials in Darwin claim 292. Modern estimates have more than doubled the original figure, but the initial range of around 250 seems to be the most agreed upon number.

The Japanese lost only 2 men, Takezo Uchikado and Katsuyoshi Tsuru, when their plane crashed near Darwin. Another Japanese pilot, Hajime Toyoshima, was captured by Matthias Ulungura after crashing on Melville Island. He was the first prisoner of war captured on Australian soil. Ulungura was a member of the Tiwi people who have long inhabited the Tiwi Islands. He recalled the moment he snuck up behind Yoyoshima with a tomahawk:x

“I walked after him and grabbed his wrist near gun. He got proper big fright. I take revolver from his right side near his knee. Then I walk backwards pointing gun, I say ‘Stick 'em up, two hands, no more holding hands on head.’”

Ulungura could not officially enlist in the AIF on the basis of his race, but he was taken on as a personal body guard and assistant to Corporal Moore, who was permanently stationed on the Tiwi Islands. In 1985, a cairn was built by the Northern Territory government in his honour, and in 2016, a life-sized statue of Ulungura was unveiled on Bathurst Island. As for Yoyoshima, he was moved to Cowra POW camp in New South Wales. On the 4th of August 1944, he sounded the bugle that initiated the escape of about 1,104 prisoners from Cowra.xi An estimated 231 Japanese prisoners, Yoyoshima included, and 4 Australian guards were killed during the breakout.xii All of the escapees were either recaptured or committed suicide to avoid recapture within 10 days. 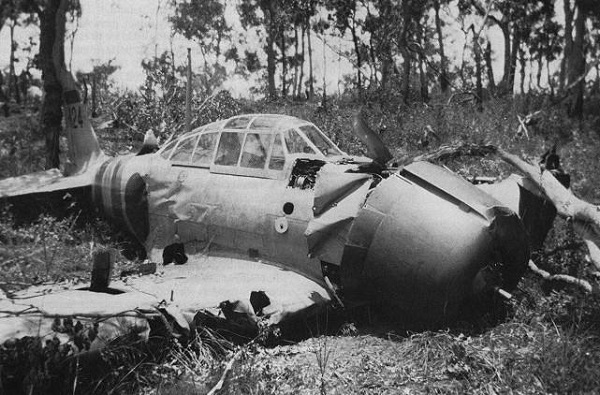 After the February 19th bombings, Darwin and other parts of Australia’s top end including Townsville, Katherine and the RAAF base at Coomalie Creek were bombed frequently, approximately 100 times between March 1942 and November 1943. The Japanese carriers involved in the raid (Akagi, Soryu, Kaga and Horyu - the same that had launched the Pearl Harbour raid) were all sunk in the Battle of Midway just four months later, meaning the sheer numbers of aircraft could no longer be mustered for repeat raids of that magnitude.xiii

The air raid siren sounds at the Cenotaph in Darwin at 0958 on the 19th of February every year in honour of the brave Allied soldiers and civilians who lost their lives in the bombings. We will continue to remember them all.

i stimated figures from the Lowe Commission 1942.

vii According to Tindal’s Service Record.

xii According to official Government Inquiries.