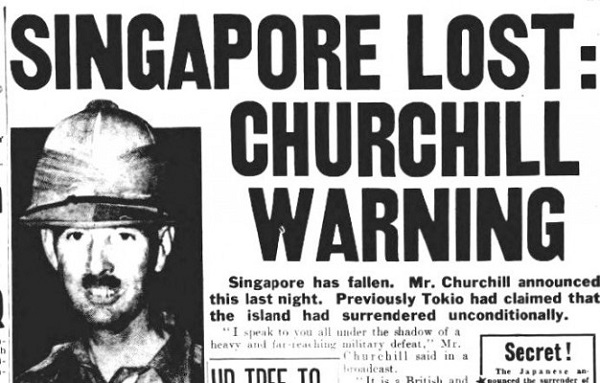 The Fall of Singapore in February 1942 was a geopolitical shattering event that has had a lasting effect on not just the regional power dynamics of the Asia-Pacific but globally. Singapore had been ruled as a British colony since 1819 and had become a major East-Asian trading port. It had also gained a reputation as an impregnable stronghold, in fact it was known as the “Gibraltar of the east”. In 1942, all these assumptions were soon to be tested.

Ever since the Russo-Japanese War of 1904-1905, Japan had been expanding its influence across Asia. In the First World War they had sided with the Allies and were rewarded with control of a number of German possessions on the Chinese coast. The Japanese were insulted at the Paris Peace Talks in 1919 by the failure of a clause of racial equality being adopted and this lead them into a more antagonistic direction as well as the arms of other powers annoyed at the Treaty of Versailles, Germany and Japan.

During the 1920's and 1930's, the military gained more and more influence over Japanese government and the practice of official Emperor worship became more pronounced. Japanese society became heavily militarised. The Japanese homeland was becoming extremely overpopulated as the birth rate skyrocketed and raw materials and resources were becoming scarce. The Japanese government began to look for territory elsewhere.

On the 18th of September 1931, Japanese forces moved from their bases in Korea to invade the resource rich Chinese Provence of Manchuria. The supposed excuse for the invasion was a Chinese attack on a railway line along the border. The Japanese were ruthless in asserting their control over the region setting up a puppet regime under the former Chinese Emperor Pu Yi, who was ethnically Machurian. The Japanese puppet state was renamed Manchuko to sound more Japanese. In 1933, after the League of Nations released a report into the Japanese invasion declaring the attack illegal and demanding that the province be returned to China, Japan withdrew from the League of Nations and further isolated itself from the Western democracies.

In 1937, the Japanese took their next step in the domination of Asia by launching an invasion of China proper. On the 7th of July, a border skirmish broke out at the Marco Polo Bridge just outside Beijing and soon the Japanese army was engaged in a full scale attack on China. Most of North-East China fell quickly including Beijing and Shanghai. One of the worst aristocracies of the entire Second World War took place when the Japanese forces reached what was then the Chinese capital of Nanjing in December. In what was known as the “Rape of Nanjing” Japanese forces committed mass rape and massacre of the cities civilian population as well as widespread looting. In the madness up to 300,000 people were killed by the end of January.1

Internationally, the reaction to both the invasion of China and the massacre was outrage and condemnation. Several countries including the United States of America put oil sanctions on Japan. The Japanese responded by strengthening ties with Nazi Germany and Fascist Italy,signing the Anti-Comintern Pact followed by the Tripartite Pact in 1940. 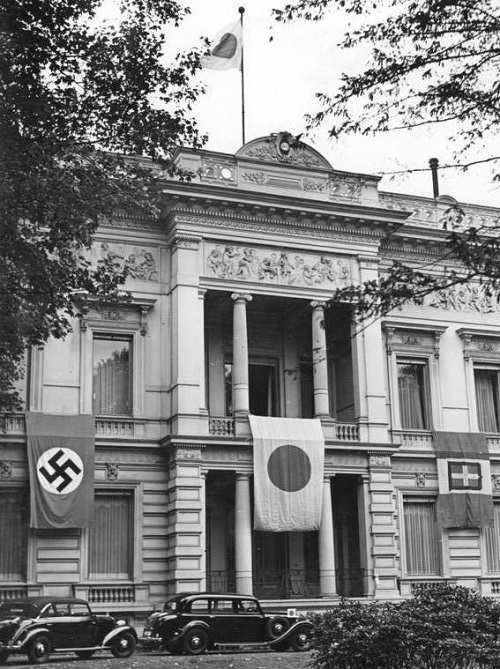 https://upload.wikimedia.org/wikipedia/commons/a/ad/Bundesarchiv_Bild_183-L09218%2C_Berlin%2C_Japanische_Botschaft.jpg
The Japanese embassy in Berlin clad in the flags of the three signatories of the Tripartite Pact in September 1940

Tensions between Japan and the United States continued to grow over the next few years. After the German defeat of France in 1940, the French colony of Indochina was occupied by Japanese forces. Upon the occupation of Indochina, the Japanese announced a policy of creating a “Greater East Asia Co-Prosperity Sphere” as a pan-Asian block led by Japan to counter Western imperialism. the The USA and other Western powers protested and further sanctions and a trade embargo were initiated. After negotiations eventually broke down, the Japanese came to the conclusion that their best option was to launch a surprise attack on both American and British forces in the Pacific.

On December 7 1941, the American navy base at Pearl Harbour, Hawaii was bombed killing over 2000 and sinking 4 battleships, 3 cruisers and 4 destroyers.2 At the same time, Japanese forces began an invasion of British Malaya and attacked Hong Kong and begun bombing Singapore. The Second World War that had begun in Europe had now come to the Asia-Pacific.

British Prime Minister Winston Churchill assured the American President Franklin D. Roosevelt that Singapore was impregnable and would not fall to the Japanese. It was assumed that any invasion would come from the sea and thus the main attention of the defence plans by British commander Lieutenant-General Arthur Ernest Percival was around the harbour. This proved to be a costly mistake.3

The Japanese launched their invasion of British Malaya and Thailand on the same day that Pearl Harbour was attacked by landing in the north and making their way south. They were resisted along the way by a relatively poorly equipped British Commonwealth force made up of Indians, Malayans, British and Australians. The British had the mistaken belief that the Japanese soldiers were racially inferior to white Europeans and that the jungles of the Malayan peninsula were impassable for any invading force. In fact, the Japanese were able to easily move down the coast by using bicycles to pass parts of jungle too thick for tanks and other vehicles as well as landing on beaches further south to totally bypass difficult terrain. 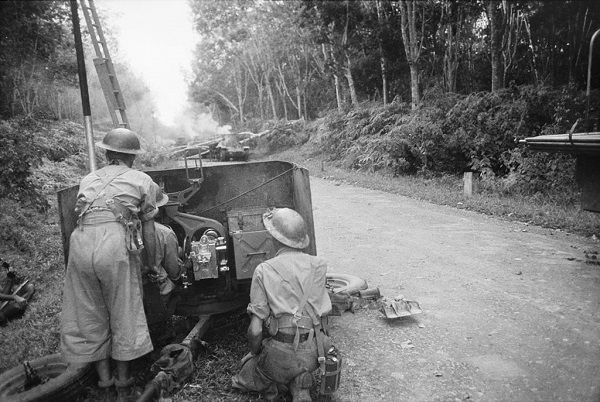 By the end of January 1942, the Japanese had pushed the British all the way to the tip of the Malayan Peninsula and on the last day of the month the last British forces moved across the bridge linking the island of Singapore to the mainland and then blew a hole into it. 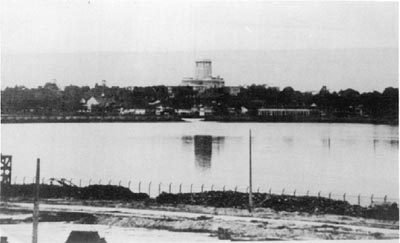 https://upload.wikimedia.org/wikipedia/commons/3/35/Singapore_causeway_blown_up.jpg
View of the blown up causeway, with the gap visible in the middle, which delayed the Japanese conquest for over a week to 8 February.

Lieutenant-General Arthur Percival, commander of the garrison, had 85,000 soldiers, of which 15,000 men were employed in logistical, administrative, or other non-combatant roles.4 Lionel Wigmore, the Australian official historian of the Malayan Campaign, wrote:

“Only one of the Indian battalions was up to numerical strength, three (in the 44th Brigade) had recently arrived in a semi-trained condition, nine had been hastily reorganised with a large intake of raw recruits, and four were being re-formed but were far from being fit for action. Six of the United Kingdom battalions (in the 54th and 55th Brigades of the 18th Division) had only just landed in Malaya, and the other seven battalions were under-manned. Of the Australian battalions, three had drawn heavily upon recently-arrived, practically-untrained recruits. The Malay battalions had not been in action, and the Straits Settlements Volunteers were only sketchily trained. Further, losses on the mainland had resulted in a general shortage of equipment.”5 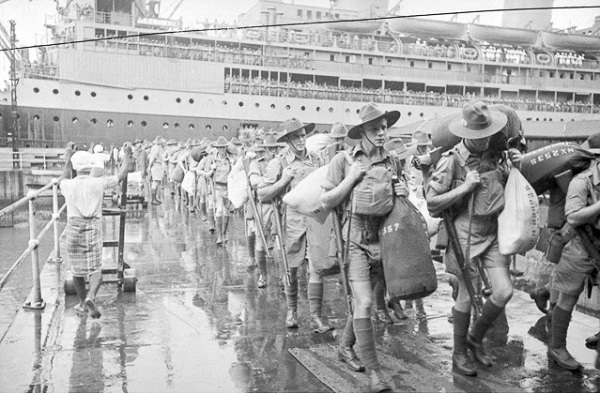 Japanese forces begun landing on the north coast of Singapore on the 8th of February. About 23,000 men landed opposed by only 3000 Australians in the 2/18th and 2/20th Battalions with no reserve.6 Over the next couple of days there was fierce air and land fighting until a few days later the Japanese broke out. On the evening of 10 February, British Prime Minister Winston Churchill, cabled General Archibald Wavell, commander of American-British-Dutch-Australian Command saying:

“I think you ought to realise the way we view the situation in Singapore. It was reported to Cabinet by the CIGS [Chief of the Imperial General Staff, General Alan Brooke] that Percival has over 100,000 [sic] men, of whom 33,000 are British and 17,000 Australian. It is doubtful whether the Japanese have as many in the whole Malay Peninsula ... In these circumstances the defenders must greatly outnumber Japanese forces who have crossed the straits, and in a well-contested battle they should destroy them. There must at this stage be no thought of saving the troops or sparing the population. The battle must be fought to the bitter end at all costs. The 18th Division has a chance to make its name in history. Commanders and senior officers should die with their troops. The honour of the British Empire and of the British Army is at stake. I rely on you to show no mercy to weakness in any form. With the Russians fighting as they are and the Americans so stubborn at Luzon, the whole reputation of our country and our race is involved. It is expected that every unit will be brought into close contact with the enemy and fight it out ..”7 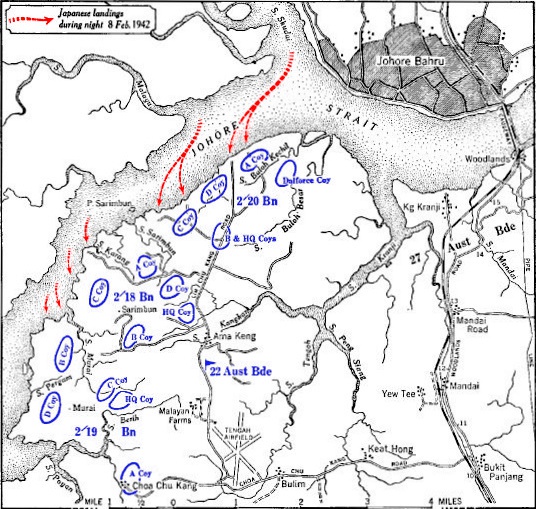 By the 15th of February, the British situation had deteriorated further. The water system was badly damaged and continued supply was uncertain, rations were running low, petrol for military vehicles was all but exhausted, and there were few rounds left for the field artillery. The anti-aircraft guns were almost out of ammunition, and were unable to disrupt Japanese air attacks. Percival held a conference with his senior commanders. He proposed two options: either launch an immediate counter-attack, or surrender. After heated argument and recrimination, all present agreed that no counterattack was possible. Percival opted for surrender. 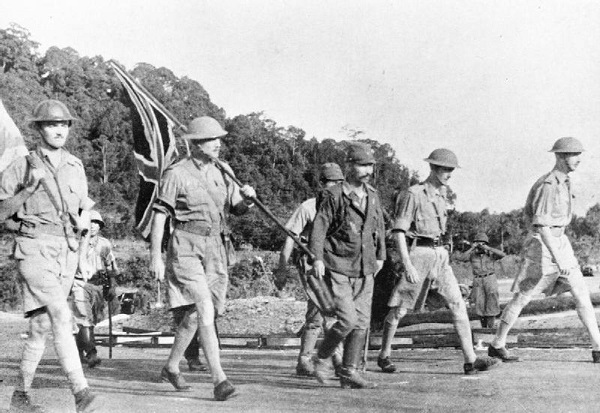 https://upload.wikimedia.org/wikipedia/commons/a/a6/Surrender_Singapore.jpg
Lieutenant-General Percival and his party carry the Union flag on their way to surrender Singapore to the Japanese.

Some post war analysis has shown, though, that had Percival opted for a counterattack at that time, it might have been successful. The Japanese were at the limit of their supply line, and their artillery had just a few hours of ammunition left.8

The failure at Singapore left a massive dent in the Allied war effort. British Prime Minister Winston Churchill called the fall of Singapore to the Japanese "the worst disaster and largest capitulation in British history" and his personal physician Lord Moran wrote:

“The fall of Singapore on February 15 stupefied the Prime Minister. How came 100,000 men (half of them of our own race) to hold up their hands to inferior numbers of Japanese? Though his mind had been gradually prepared for its fall, the surrender of the fortress stunned him. He felt it was a disgrace. It left a scar on his mind. One evening, months later, when he was sitting in his bathroom enveloped in a towel, he stopped drying himself and gloomily surveyed the floor: 'I cannot get over Singapore', he said sadly.”10

Only a couple of days later on the 19th of February, the Second World War had reached Australian shores with the 1st bombing of Darwin.