All three services bore the brunt of the early Japanese onslaught through Malay / Singapore and the Netherlands East Indies, and sustained casualties accordingly.  Australia’s forces were meagre in numbers, operating outdated equipment, and spread far too thinly.

When the fighting reached New Guinea, the enemy were on Australia’s doorstep. Protection of Port Moresby in New Guinea went to the top pf the list, and air cover was going to be vital.

Australia had no fighter aircraft on the Australian mainland as the Japanese surged south.

Australia’s Prime Minister John Curtin made impassioned pleas to the UK and the USA for aircraft that could hold their own.  The British had none, and the US were making good their own losses from recent set-backs. The major Allies were initially dubious as to whether Australia had the pilots to fly them!  The fact that Australia was churning out aircrew under the Empire Air Training Scheme for the air war in Europe seemed lost on our Allies!

Fortuitously, aircraft originally intended for the Netherlands East Indies (now Indonesia) were able to be diverted as the Japanese overran Java.

A shipload of Curtiss P40E Kittyhawk fighters were thus diverted to Sydney, and hastily assembled at Bankstown aerodrome in early-March 1942. 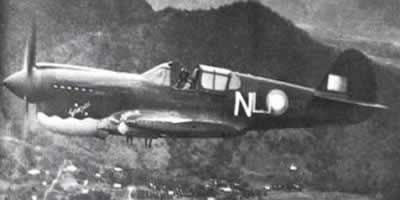 P40s were to serve Australia with distinction, throughout the Pacific war.  If not the match of a Zero in a dog fight, or of the Spitfire in aesthetic elegance, they had relatively good performance and they were rugged and reliable in appalling conditions. In 1942, there was nothing else and the Kittyhawks fell in the RAAF’s lap.

No.75 Squadron was formed around these aircraft in a matter of two weeks in early March 1942.   The people to fly and maintain them and the equipment and supplies to sustain them were earmarked assembled and despatched to the front line, 2,000 miles away.

The pilots had generally less than 10 hours flight time on Kittyhawks, their aircraft lacked radios and the unit had no real ‘collective’ capability, yet they were being sent into combat.

The process of just getting to the front line was daunting, as the sheer distance, terrain and weather took their toll.  Losses began immediately, as the aircraft were ferried north.  Three aircraft and two pilots were lost to bad weather. 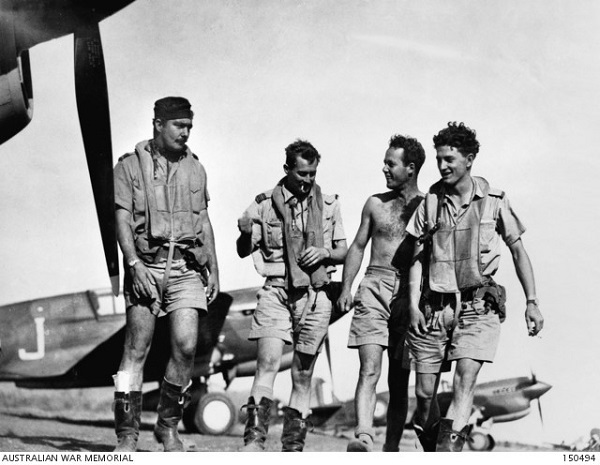 To make matters worse they came under friendly fire as the approached ‘Seven Mile Strip’ outside Port Moresby on 21 March 1942, as the P40s were the first Allied fighters the nervous defenders had seen.  Two more aircraft out of action.

Readers are referred to an outstanding documentary, ’44 Days’ narrated by Geoffrey Robertson QC, as told by the men who undertook the epic struggle in which 75 Squadron was engaged, taking the fight to the previously unchallenged Japanese,  for the following six weeks.

In mid-May, depleted by losses, with only one remaining serviceable P40, they were withdrawn to re-equip and be reinforced, then to return to the fight later in the year at Milne Bay where they supported the Army in inflicting the first land defeat of Japan in WW2

P40s also featured in one of the last RAAF air actions of the Pacific War, when on the 8th August 1945, just a week before VP Day, four Kittyhawks of No. 82 Squadron RAAF left Labuan in North Borneo to strike Kuching.  It was to be the longest flight recorded by P40s in combat, over 900 miles and over four hours in the air.

The pilots on the raid were;

The VWM has a wonderful resource in the form of a range of personal stories of one of the pilots engaged on that raid, Howard James-Martin.

Recently his Great Grandson produced a ‘stop motion’ video of the raid, based on the written accounts and his great grandfather’s log book.  Given that one of the VWMA’s objectives is to ensure that ‘we will remember them all’, and education is a key facet of that objective, this effort stands as a wonderful memorial to the men who flew Kittyhawks ‘from the first to the last’ for the RAAF in the Pacific theatre of war.