The Last to Fall - Australians Killed in Action WW1

“Last to Fall” - the last Australians Killed in Action in WW1

Having been in action almost continuously since the German Spring offensive, the Australian Corps was withdrawn from the front line following the Battle of Montbrehain on 5 October 1918.  It was still being reinforced and 'rationalised', with a Battalion in each Brigade being disbanded, following the debilitating losses of the “Hundred Days” campaign, when the Armistice was declared on 11 November 1918.

It is generally assumed that the last of Australia’s “Killed in Action” casualties had been sustained at Montbrehain.

Most of the fatalities in the intervening period were “Died of Wounds” or “Died of Illness” (the portent of the emerging influenza pandemic).

However, in two separate, sharp actions, on 4 November 1918, the last members of the AIF to be killed in action met their fate.

At least one other Australian, serving in the Royal Navy, was to die the very day prior to the Armistice being declared.

Three pilots of No. 4 Squadron AFC died over Belgium in one of the last mass dogfights of the war on the 4th November. 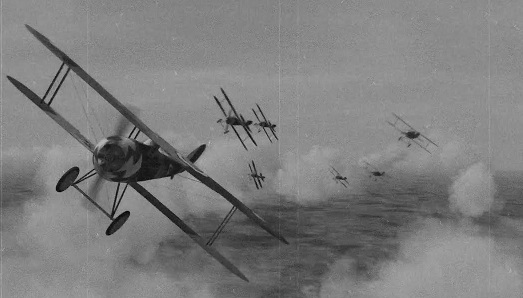 After losing two aircraft in the morning (although both pilots survived) things got a whole lot worse for 4 Squadron in the afternoon.

In the afternoon of 4 November 1918, 16 Sopwith Snipes of No. 4 Squadron AFC were escorting a group of British bombers back to base along with several craft from the 2nd Squadron AFC, when a dozen Fokker DVII aircraft were spotted. These Fokker aircraft belonged to the feared Jagdstaffel 2 (Jasta 2 / “Jasta Boelke”) Squadron. Soon a wheeling swirling dog fight erupted in the skies over Ath and nearby villages. While 4 Squadron downed four of the German aircraft, three of their own went missing that afternoon. It was later concluded at a Court of Inquiry that all 3 pilots had been shot down and killed.

The three aircraft were flown by:

Captain Thomas Charles Richmond Baker DFC, MM & Bar. A South Australian, in a brief but brilliant career as a fighter pilot on the Western Front he had downed 12 enemy aircraft before himself being claimed on 4 November 1918.  He had won two Military Medals as a Gunner in the 6th Field Artillery Brigade before transferring to flying training.  He was just 21 when he died.  His DFC citation (awarded after his death) bellies the few photographs of a thoughtful young man who had already repeatedly demonstrated courage and determination of the highest order.  This enthralling “Selfie” taken while he was training as a pilot may be one of the first of this genre of documentary photography. 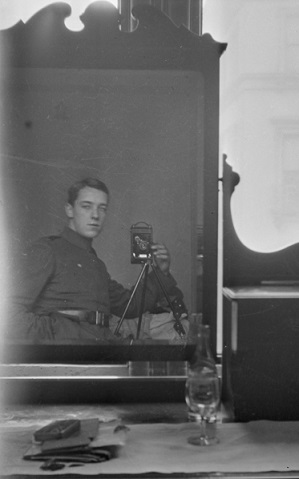 A "Selfie" taken by Richmond Baker while undergoing flying training.

Lieutenant Arthur John Palliser. A Tasmanian, he had shot down 7 aircraft in his time with No. 4 Squadron, which including downing 3 enemy aircraft on one day (29 October 1918.)  He had originally enlisted as a motor mechanic, and like many of his peers was drawn to the AFC by the excitement it engendered in those 'on the ground' as they watched the dogfights swirl above them. 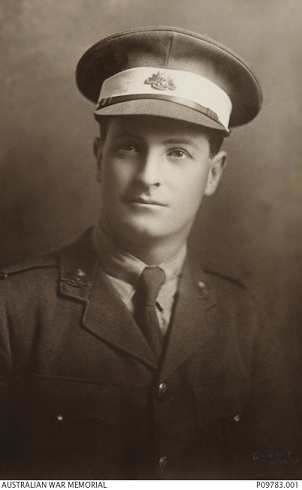 Lieutenant Parker Whitley Symons. Another South Australian, he had moderate success in no. 4 Squadron since joining it in September, however, he had not yet claimed the prized 5 kills needed to be classed as an 'ace.' 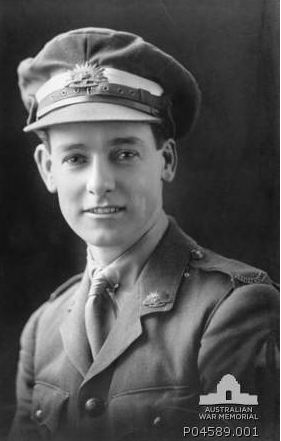 It later transpired that Baker and Palliser had been claimed by the Commander of Jasta 2 Rittmeister Karl Boller, himself an accomplished ace with 36 victories.  Parker SYmons appears to have been the victim of Leutnant Ernst Bormann.

The Battle of the Sambre

Concurrently a major British attack was being mounted on the Sambre Oise Canal about 60km to the south east, behind which the Germans had withdrawn.

The Australian Engineers of 1st Tunnelling Company (made famous in the movie “Beneath Hill 60”), took part in the crossing, under fire, of the Sambre-Oise canal.   Four of them were to die in this action, one of his wounds later the same day.  A Gunner of the 11th Field Artillery Brigade, operating in support of the operation was also killed.

The Battle of the Sambre was one of the last British offensive actions of the war, in which a total of four British VCs were awarded. 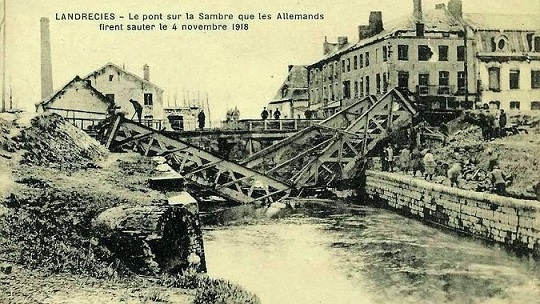 The lock on the Sambre-Oise Canal over which Engineers sought to erect bridging while the Germans swept the area with machine gun and artillery fire.

The Battle's most famous casualty was British Poet Laureate Wilfred Owen, MC.  His writings defined the war in the minds of a generation.  His bravery and commitment was beyond questsion, but his disillusionment was palpable in his literary works. 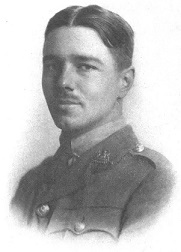 Wilfred Owen, MC British Poet Laureate, killed at the Battle of the Sambre

Officer Commanding the 1st Tunnelling Company detachment was Captain Oliver Holmes Woodward MC**.  His notes and his citation for the second bar to his Military Cross perhaps best describe the events that claimed the lives of four of his men.

Woodward and the 1st Tunnelling Company sapper's role "was the construction of a heavy bridge to carry tanks. The successful completion of this work done within 5 hours … was mainly due to his detailed preparations made at very short notice, and his example and disregard of danger under intense artillery and machine-gun fire."  He was awarded a second bar to his MC.

In his own notes he described what happened to his men;  "At 11 a.m. we were ordered to retire. We then took stock and found we had lost five killed and five wounded. The latter had been attended to by the Stretcher Bearers. We then located the bodies of our dead comrades, found the Padre of the 409th Field Company, and laid them to rest in the Village Cemetery of Rejet de Beaulieu"  In fact three of his men had been killed outright and a fourth died of his wounds later the same day.

Woodward's men killed in the action were:

Sapper Charles BARRETT, aged 43, born in South Australia but enlisted in WA.  He was single and listed a sister as his next of kin.  Sadly she was unable to be traced after the war so Charles' medals and commemorative plaque were never issued.

Corporal Albert DAVEY, a 32 yearold miner whose family were originally from Beaconsfield in Tasmania but Albert had been born in Ballarat Victoria. 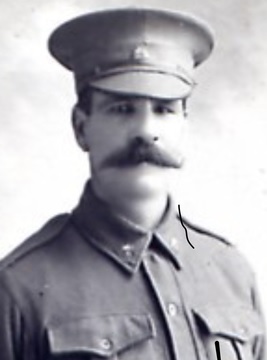 Like his colleagues, Sapper Arthur JOHNSON was older than the average AIF digger at 40 years old.  A farmer, he had been born in Victoria he had relocated to WA where he married, and from where he enlisted in March 1917.

Sapper Frederick KNIGHT born in the UK, had lived in WA and worked as a miner in Bunbury.  He was 41 years old by the time he was part of the 1st Tunnelling Company detachment supporting the British Army's assault crossing of the canal.  The bridging operation was subject to enemy machine gun and shellfire, when he was wounded on 4 Nov 1918, later dying of his wounds that same day in a Casualty Clearing Station.

Meanwhile, Australian artillery units supporting the battle received enemy fire and Gunner Carl Frederick GERLER was killed as a result.  Born in Victoria, Carl Gerler's family had moved to Tenterfield in northern NSW.  By the time of his enlistment he was working in Moreton Bay Queensland.  He was 21 when he was killed. 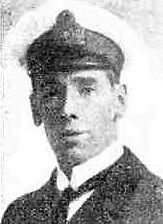 The last Australian as far as we know, to be killed in action was not serving in the AIF.  He was a Naval Officer serving on a Royal Navy vessel, the HMS Ascot.  James Knox Patterson, a 30 year old marine Engineer from Adelaide in South Australia was below decks when his ship was torpedoed and sunk by German submarine UB 67 off the Farn Islands the day before the signing of the armistice; it was the last ship to be sunk by enemy action in the Great War. Like most of his colleagues "in peril on the sea', he has no known grave.

Sadly, although these men were the last to be killed in action, the war continued to exact a deadly toll.  The influenza epidemic which is now known to have originated in the USA, was making its presence felt in military hospitals across France Belgium and the UK. Brought to Europe by the troops of the US Expeditionary Force, it spread very quickly in military encampments on both sides.  It was globally mobilised by troops returning home, particularly from the British Empire, in troopships.  It was eventually to kill more than 40 million people, dwarfing the casuaty lists generated by the war itself.

The effects of what the troops had been through would continue to take its toll of the participants.  Of the men who returned whom to Australia fully 50% would be dead within 20 years, many of them severely impaired by the effects of gas, bullet and shrapnel wounds, disease and psychological trauma.

Revisionist historians are wont to claim that there was no 'lost generation' arising fron the aftermath of WW1.  The facts suggest otherwise, particularly amongs British Dominion troops who were for the most part infantrymen.  They suffered disproportionately high casualty rates and the highest levels of exposure to physical and psychological trauma.  Australia and Canada and New Zealand lost nearly 20% of their deployed troops killed, plus another 40% or so wounded.   It was to be a legacy they (and their families) would bear for the rest of their lives.