Legendary American author Mark Twain was the owner of three collie dogs. It’s likely they were the inspiration for his famous quote, “It’s not the size of the dog in the fight, it’s the size of the fight in the dog”. Ironically, the Australian soldier who best embodied this quote was nicknamed ‘Kitten’.

James Percival ‘Kitten’ Marshall was 5 foot 2 inches (1.57m) with his boots on.[i] A baby-faced ‘infant soldier’, Kitten was barely 18 when he embarked for France aboard the HMAT Ceramic. Prior to embarkation, he marched over 400 kilometres from his home town Gundagai on the Kangaroo recruiting march. James was fondly referred to as the ‘joey’ of the ‘marsupial mob’.[ii] Like many other ‘Kangaroo’s’ he was allotted to the 55th Infantry Battalion and became a stretcher bearer, a position usually reserved for taller recruits. 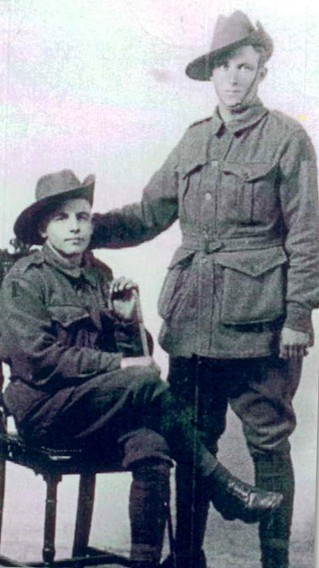 Gundagai’s ‘Little Hero’ arrived home four years later donning two medals, the Distinguished Conduct Medal and the Military Medal. The Military Medal was awarded to Kitten for gallantry while carrying and tending to the wounded at the Battle of Mont Saint-Quentin. His “coolness under fire and zealous [carrying out] of duties undoubtably saved many lives”.[iii]

Just days later, as the 55th Battalion attempted to penetrate the Hindenburg Line at St Quentin Canal, Kitten once again stepped into the firing line, this time finding himself one of only two survivors who had breached a section of enemy trench.[iv] Realising the attack relied on the capture of this trench, Kitten and his lone comrade began “bombing the enemy, killing and wounding a number and driving the remainder out of the trench where they were dealt with by [the] Lewis Gunners”.[v] One can only imagine the fear that little Jim Kitten Marshall, hardly taller than his rifle and bayonet, must have struck in the enemy for them to be willing to breach their trench and face the fire.

In the words of Kitten’s mother Eliza, “they sent him away a baby, and bought him back a man - a hero”.[vi] Kitten “had a heart that throbbed harder than many men twice his size,” so much so that the town of Gundagai decided the nickname ‘Kitten’ should be upgraded to ‘Lion’.[vii]

Left to Right: James Marshall and his brothers Harrie, Edward (Roy) and Albert (Bert). Harrie was the other brother not to return to Gundagai
From The Gundagai Independent - November 1917

Had James Marshall enlisted in 1914, he would have been rejected. Height requirements in 1914 were set at 5 foot 6 inches (1.68m), relaxing to 5’2 (1.57m) in 1915 and further again to 5’0 (1.52m) in 1917.[viii] The requirements in Britain were stricter, with all men under 5’3 turned away. These enlistment standards struck a nerve with a 5’2 miner who had been denied at every recruitment station he had attempted to enlist at. As the legend goes, by the time he reached Birkenhead, he was threatening  to fight every man who thought the extra inch mattered.[ix]

Birkenhead MP Alfred Bigland wrote to Lord Kitchener urging the War Office to reconsider their enlistment standards. They agreed, a soon 3,000 undersized men had enlisted in Birkenhead alone.[x] It made sense logistically to group these men together into separate battalions rather than spread them between existing units; that way, the army could provide them with uniforms and equipment tailored to their size, while also unifying the men with a common bond. Thes battalions became known as ‘Bantam battalions’,[xi] and by the end of the war, 29 had been created.[xii]

The Bantam battalions were extremely well respected within the ranks of the British Army. Other units became very protective of the “little chaps”, who were known for their “sharp tongues” and “funny insults”.[xiii] The bantams from Glasgow, notorious for their quarrelsome nature and frequent bar brawls, were given the nickname ‘The Devil’s Dwarfs’.[xiv] 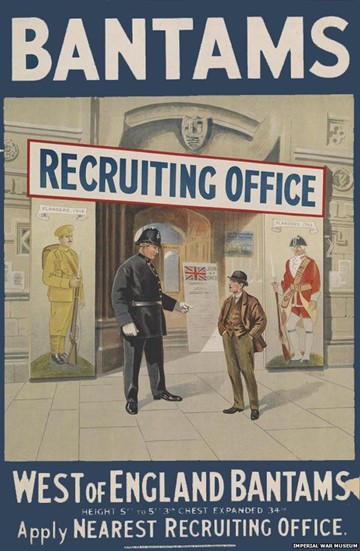 A Bantam recruitment poster from 1917
From the Imperial War Museum, London

The smallest man to ever serve in the British Army was not part of a Bantam battalion; in fact, he was not even British. Frank Clifford Wittman, affectionately called ‘Twit’, was born near Warragul in Victoria. Measuring just 3 foot 8 inches (1.12m), Twit was barely taller than the average 5-year-old boy[xv] when he enlisted in May 1915 at age 26.[xvi] Assigned to the Convalescent Hospital ‘Osborne House’ in Geelong, Twit, who worked as a pharmacist prior to enlistment, put his skills to use tending to repatriated diggers from Gallipoli. He desperately wanted to be sent overseas himself, but was told his lack of height would prohi bit him from ever serving outside Australia.

Twit was a “tiny man, but he weighed a ton when he was crossed”,[xvii] and naturally he was ropable to discover his height had condemned him to hospital duties in the eyes of the Australian Army. Within days of the news, he had applied for and been granted discharge from the AIF. The story doesn’t end here for Twit. Not to be outdone, he paid his own way to Serbia, but was promptly rejected once more.[xviii] Still the little man did not quit, sailing to England where his story caught the attention of the British Army Medical Services Director-General Sir Alfred Keogh.[xix] On Keogh’s word, Frank Clifford Wittman was finally accepted, assigned to the Royal Army Medical Corps and posted to India.[xx] 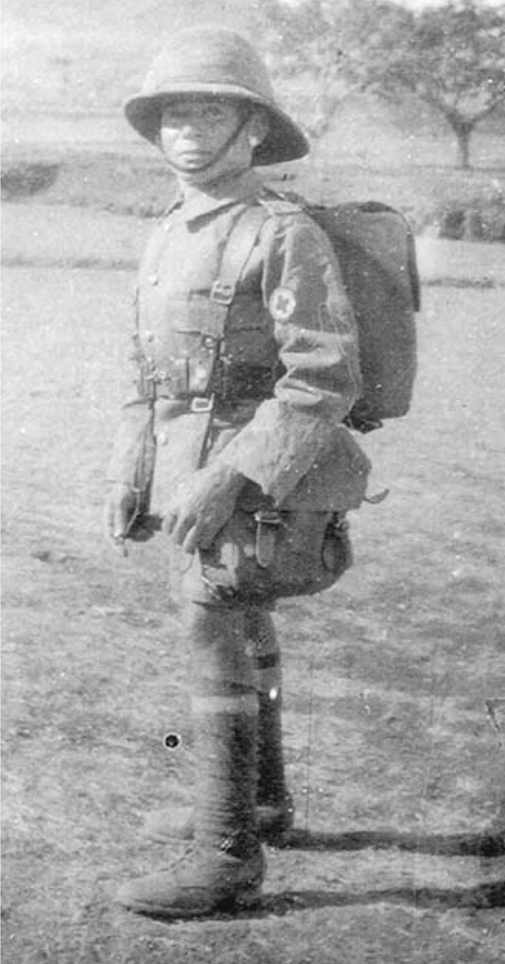 In 1917, the now Sergeant Wittman was transferred to Mesopotamia (Iraq) to provide much needed medical support during the British 6th Division’s push along the Tigris River.[xxi] The conditions in Mesopotamia were awful. The overwhelming heat and droves of flies caused many men to fall ill, but Twit worked tirelessly dispensing medicine to the sickly soldiers. Such was Twit’s unwavering resolution for the job at hand, he would often deliver orders to his troops sitting on the shoulders of one of his men so that he would no t be lost in the crowds.[xxii] He continued to serve in Mesopotamia until discharge in 1919.

When Japan entered the Second World War in December 1941, Frank Wittman, now nearly 53, was ready to serve once more. Again, he faced prejudice because of his height. This lead him to send an impassioned public plea to serve, within which Wittman wrote, “I want to be of use in this war, and I’m sorry that my stature has so far been a barrier to an appointment with the AIF or even in a home service capacity”. A year later, he was finally accepted into the Intelligence Corps. Of course, his decades of pharmaceutical experience was wasted on cipher work, but it took until 1944 for the AIF to transfer him to the Australian Army Medical Corps.

In 1948, Twit was promoted to Warrant Officer Class 1, and applied to enlist in the Regular Army Special Reserve. In his application he wrote, “I have not taken one day’s sick leave during the whole of my service. My acceptance in the army was never automatic. There were always obstacles to be overcome”. Despite years of rejection and persecution because of his height, 3 foot 8 Frank Clifford Wittman became one of the Australian Army’s most loyal and dedicated servicemen. Discharged in March 1950 with the rank of honorary Lieuten ant after 13 years of military service across two world wars, Twit’s extraordinary character and resilience means he will always stand a foot above the rest. 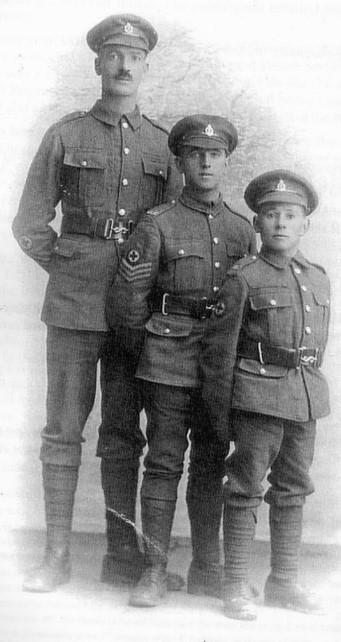 Sergeant Wittman pictured alongside two unknown soldiers while serving in the Royal Medial Corps. The middle soldier cannot be been much taller than 5 foot, while the tallest soldier appears to be well over 6 foot
From Just Soldiers - ‘WO1 Frank Wittman: Determined to Serve’ by Darryl Kelly, photograph courtesy of Don Darbyshire

Inverting little Twit Wittman’s feet and inches from 3’8 to 8’3 gives us the height of a giant. Private Patrick O’Connor, ‘The Tipperary Giant’, supposedly stood at 8 foot 3 inches (2.51m) and weighed 22 stone (139.7kg).[xxiii] Thought to be the tallest man in the world, he toured around Australia so people could witness his extraordinary height in the flesh.[xxiv] The claims of 8’3 made but multiple local newspapers during his tour seem to have been handsomely extrapolated. Officially, O’Connor was ‘only’ between 7 foot (2.13m) and 7 foot 4 inches (2.23m) tall (heights in his service record differ). 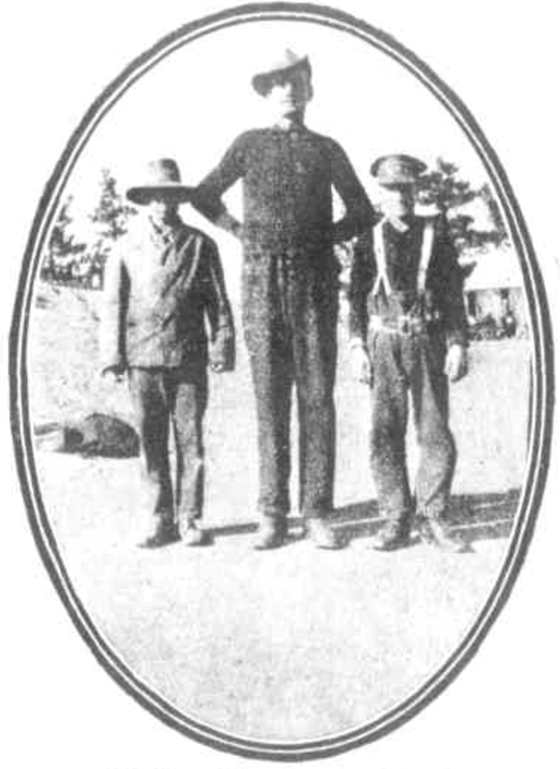 Hailing from Tipperary in Ireland, O’Connor found himself in Sydney when war broke out. He enlisted in March 1916 as part of the 6th Reinforcements of the 56th Battalion, and embarked for England aboard the HMAT Ceramic in October. On arrival, he trained as a stretcher bearer, becoming a familiar figure on the Battalion’s route marches around their camp in Salisbury Plains. Walking long distances was a struggle for Private O’Connor. The cold British winter coupled with the stress his weight put on his joints meant that he was susceptible to severe pain in his knees and ankles. Clothing the Tipperary Giant was also “a great difficultly”; he was “the only man in the AIF to wear tailor-made clothes” and “size 18 boots”.[xxv] When the rest of his battalion was sent to France, Private O’Conner stayed in London working as the commissionaire of ‘Australia House’. He had been deemed “too big [of] a target” to be sent to the front line,[xxvi] and “too short for an observation post”.[xxvii]

In April 1917, Private O’Connor was diagnosed with rheumatoid synovitis in his left knee, and was sent back to Australia, returning on the 25th of August. He was discharged on the 30th of November, later sailing home to Ireland to reunite with his wife Annie and their two children.

The Royal Australian Navy too had its fair share of giants. Ordinary Seaman John Philip de Gracie and his brother Ordinary Seaman Edwin George de Gracie were far from ordinary height. John, who was by all accounts a phenomenal ruckman for the South Melbourne Football Club before enlistment, stood 6 foot 8 inches (2.03m) tall, while little brother Eddy was 6 foot 7 (2m). Sadly, John was killed on the 20th of November 1941 serving aboard the HMAS Sydney when it was torpedoed and sunk by the German cruiser Kormoran off the coast of Western Australia. The entirety of the Sydney’s 645 crew members disappeared, so John’s body was never recovered.

Determined to make his late brother proud, Edwin enlisted in the RAN in March 1942. Three times previously he had tried to join the army but was rejected for fear his height may cause problems on the battlefield. When he arrived at the recruiting office, he was instantly recognised as a de Gracie boy.[xxviii] He told the officers he was “ready to carry on the name”,[xxix] taking over the distinction of tallest in the RAN from John. Given the nickname ‘Shortie’, Eddy de Gracie began his training at the HMAS Cerberus base, before being transferred to HMAS Leeuwin in Fremantle in July 1942 where he remained until discharge. 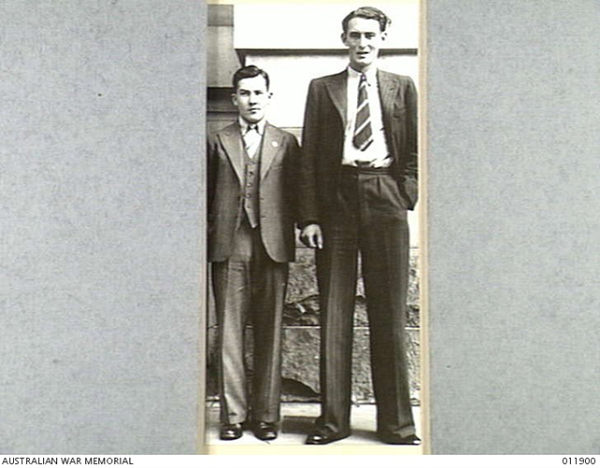 Feet and inches are not appropriate measurements for men like Kitten Marshall and Twit Wittman. It was British Prime Minister David Lloyd George who said a man’s height should be measured from his chin up, but for these brave men, the heart is a more suitable starting point. I think we would find they stood just as tall as giants like Patrick O’Connor and the de Gracie brothers. For all of these uniquely sized men, nothing was ever made easy. They could quite easily have lost hope after consistent refusal, or excused themselves from service all together, but the fight in the dog prevailed.