The Sinking of the SS Vyner Brooke and Massacre at Radgi Beach, Bangka Island 16 February 1942

In February 1942, as it became apparent that 'Fortress Singapore', the bastion of Britain's South East Asian strategy, was likely to fall to advancing Japanese forces, an evacuation began, by sea air and any other means available.

By this stage the Japanese had established air superiority, so ships leaving Singapore were exposed to air attack.  In open waters Japanese warships were patrolling.

Australian nurses were among the personnel identified for evacuation.  Many of the nurses were attached to the 2nd / 4th Casualty Clearing Station, the 2nd/10th and 2nd/13th Australian General Hospitals. 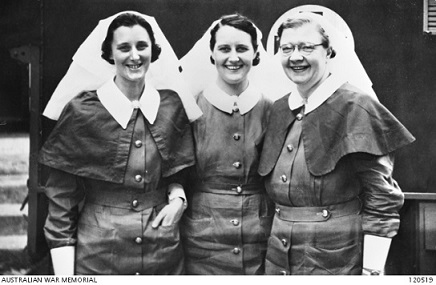 Malaya. 1941. Group portrait of three nursing sisters of 2nd/4th Casualty Clearing Station (2/4 CCS), 8th Australian Division. Left to right: Sister D. S. Gardam, who survived the sinking of the Vyner Brooke, was taken prisoner by the Japanese and died later in captivity in April 1945, Sister E. M. Hannah, also a survivor from the Vyner Brooke and the only surviving nurse of the 2/4 CCS, and, Matron I. Drummond, who, after surviving the sinking of the Vyner Brooke was among those massacred by the Japanese of the foreshore of Bangka Island, Sumatra on 1942-02-15.

Seventy-two nurses embarked with hundreds of patients and civilians aboard the Empire Star and the Wah Sui. They eventually made it back to Australia, having suffered heavy attack on the way.

Not so fortunate were the 65 nurses, evacuated, along with many civilian women and children, on the SS Vyner Brooke.

The SS Vyner Brooke was a British-registered cargo vessel of 1,670 tons, built in 1928.  She was named after the Third Rajah of Sarawak - Sir Charles Vyner Brooke. Up until the outbreak of war with the Japanese, the Vyner Brooke operated in the waters between Singapore and Kuching, in Borneo, under the flag of the Sarawak Steamship Company. She was then requisitioned by Britain's Royal Navy as an armed trader.

On the evening of 12 February 1942, Vyner Brooke was one the last ships carrying evacuees to leave Singapore. Although she usually only carried 12 passengers, in addition to her 47 crew, Vyner Brooke sailed south with 181 passengers embarked, most of them women and children. On the manifest were the last 65 Australian nurses in Singapore. The next day, the Vyner Brooke laid up in the near a small jungle-covered island on 13th February, but she was attacked late in the afternoon by a single Japanese aircraft, fortunately with no serious casualties. At sunset she made a run for the Bangka Strait, heading for Palembang in Sumatra. Prowling Japanese warships, however, slowed her escape and daylight on February 14th found her dangerously exposed on a flat sea just inside the strait. 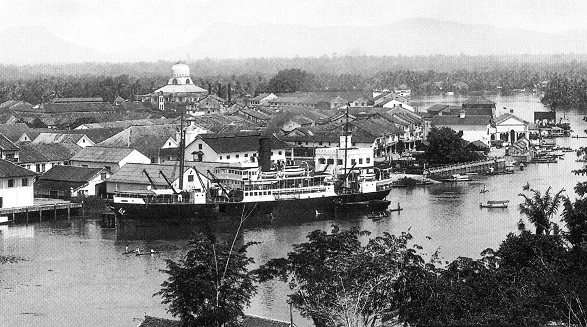 The Vyner Brooke alongisde at  Kuching before the war

Sometime after 2pm, the ship was attacked by multiple aircraft and despite taking evasive action she was straddled and hit by several bombs, eventually rolling over and sinking.  About 150 people made it into the water and came ashore over the next 48 hours or so.  The island was occupied by the Japanese and most of the survivors were taken captive.

"The Japanese planes came over and bombed us. They bombed us at 2 o’clock in the afternoon. We’d already gone down to take shelter below decks. And the side where Mona (Mona Wilton, the best friend with whom she enlisted in the AANS) and I were, we were lying flat on our faces, and the side was blown out of the ship. There was broken glass sprayed all over us. I thought my legs had been cut off, but  when I had a look they were only just cut by flying glass. But one of our girls was badly wounded. She had a very bad wound in her buttock. We carried her up this ladder onto the deck and put a field dressing on it. Then we had to abandon ship.

"It was listing now very badly. So we put the girls with the wounded over the side, down a ladder into a life boat, and they got away. They eventually got to shore but were amongst the group that was shot by the Japanese (the Bangka Island massacre). Then Mona and I climbed over the side and went down a ladder into a life boat. Jean Ashton was in the life boat. But the ship was coming over very fast. The boat was full of women and children. It was sinking. So we just had to jump out of the life boat.

We couldn’t get it away from the ship.  Not nearly quickly enough. So Mona and I jumped out. It was everybody for themselves at this stage. And Mona said “I can’t swim”. She had a life belt so I said “Just dog paddle.” We were both parallel with the ship and trying to get away from it because it was going to tip over on top of us. So dog paddle is what we did. But it did tip over on top of us, and I said to Mona, “The ship’s coming down. Looks as though we’re sunk this time. We’re not going to get out of this.” I put my hand up and caught the rail of the ship and came through the rails. When I surfaced again there was no sign of Mona. I don’t know what happened to her, I guess the ship came down on top of her and she couldn’t get out from under it. I never saw her again.

"I was still trying to get away from the ship because it was tipping over. And the rafts from the high side of the ship started to fall off. They hadn’t been thrown over, as they should have been, and I saw this raft coming down. I put my head down. I’d taken off my tin hat prior to this and the raft hit me on the head. And as I came up another raft hit me. I think there were six altogether, one after the other, they hit me on the head and kept pushing me under."

Wilma survived the sinking and made it to Bangka Island but the group she was with could not reach a fire lit on the (Radgi) beach by Matron Drummond.  As it turned out what appeared to be misfortune, saved their lives.

At  Radgi beach, other survivors had made it ashore, where fate was to deal them a dreadful hand. Survivors from the Vyner Brooke joined up with another party of civilians and up to 60 Commonwealth servicemen and merchant sailors, who had made it ashore from other vessels  that had been sunk. After an unsuccessful attempt to source food and assistance from local villagers, a deputation was sent to contact the Japanese, with the aim of having the group taken prisoner. Anticipating this, all but one of the civilian women followed behind.

Later, a party of Japanese troops arrived at Radji Beach. They marched off the males and shot and bayoneted them.  They then ordered the 22 Australian nurses and the one British civilian woman who had remained after the other party had left,  to wade into the sea.  They were machine gunned where they stood.

There were only two survivors - Sister Vivian Bullwinkel, who feigned death until the Japanese had left, and Private Cecil Kinsley, a British soldier who Sister Bulwinkel found and tended for 12 days, but he later died of his wounds.  Hiding in the jungle the pair eventually gave themselves up to the Japanese. Kinsley died shortly afterwards, and Bullwinkel spent the rest of the war as an internee, without disclosing to the Japanese that she had been witness to the massacre. 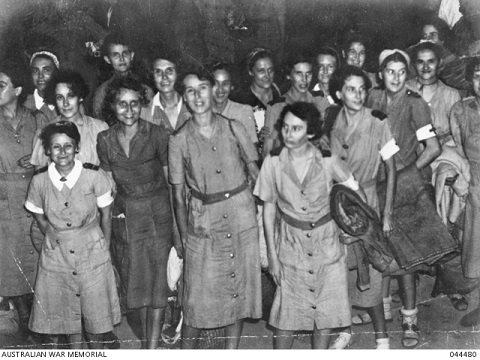 Surviving Nurses of the Vyner Brooke at war's end.  Their emaciated condition aroused outrage among those sent to retrieve them

Of the 65 Australian nurses embarked upon the Vyner Brooke, 12 died during the air attack or drowned following the sinking, 21 were murdered on Radji Beach (including Matron Drummond, above), and 32 became internees,  eight of whom (including Sister Gardam, above) subsequently died before the end of the war.