The Second World War ended in Europe on the 7th of May 1945 when the German High Command authorised the signing of an unconditional surrender on all fronts. The surrender was to take effect at midnight the following day.

In London, more than 1 million people filled the streets as King George VI, Queen Elizabeth and Prime Minister Winston Churchill waived to the adoring crowd. Times Square in New York was just as busy, and President Harry Truman dedicated the victory to his predecessor Franklin D Roosevelt, who had died less than a month earlier. Paris celebrated throughout the night and in Russia, fireworks exploded over the Kremlin. Today, 19 countries have a public holiday in honour of the Victory in Europe.

Back home in Australia, the victory was met with far less enthusiasm. ‘Since when has it been customary to celebrate victory halfway through the contest’ read the headline of the Sydney Morning Herald. The unfortunate reality was that the war was not over for the Australian troops who were still fighting the Japanese in the Pacific. While over 13,000 Allied prisoners of war were released by Germany that day, thousands more Australians remained incarcerated by the Japanese in camps across the Pacific and in Japan.

Still, the day was celebrated by Australian servicemen overseas and by the public across Australia:

In Canberra, the National War Memorial hosted a service of thanksgiving on its lawns for a crowd of thousands. The ceremony left three women so overcome with emotion that an ambulance had to be called to assist them from the grounds. The Australian Governor-General Prince Henry and his wife the Duchess of Gloucester attended the ceremonies, accompanied by their young son William, as did the acting Prime Minister Ben Chifley. Alongside the regal party stood an Australian flag from Darwin, tattered by bomb fragments during the air raid of February 1942. It was a sombre reminder that, for Australians, the war had not finished.

In Sydney’s Martin Place, thousands of office workers created a paper storm, tossing shreds from windows as merrymakers danced and sang in the streets. The carnival spirit continued into the early hours of the morning. Scenes of more than 15,000 people in King’s Cross were controlled by good-humoured police.

Melbourne’s commemorations began with a service hosted by Lord Major Sir Thomas Nettlefold. Over 100,000 people gathered around the Shrine of Remembrance to pay their respects. Churches were crowded with worshippers throughout the night remembering the fallen and those who had not yet returned. There were few signs of rejoicing. 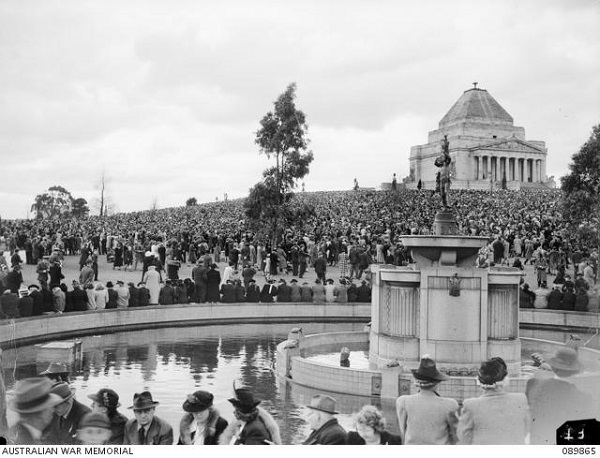 In Adelaide, a procession 2,000 strong marched to the Town Hall in song. Streamers and decorations lined the buildings, and servicemen and women were plentiful among the crowds. Wintery conditions did not deter some 8,000 people who attended an afternoon service of thanksgiving in Elder Park per the request of the Lord Major. The service concluded with a minutes silence and a reciting of ‘To the Fallen’.

Similar scenes occurred in Brisbane, where car horns and the whistling of trains mingled with the sounds of song and dance. All businesses, shops and hotel were closed the following day, for celebrations went long into the night.

Thousands flocked to the City Hall in Hobart, and danced until the early hours of the morning. Like Melbourne, churches were filled to capacity for thanksgiving services. There was noisy jubilation in Launceston, where a 40-gallon drum was rolled all the way down the main street and into the fence at the Anzac Hostel.

While records tell of celebration, it is apparent that with this sense of jubilation came an air of sadness for many. The feeling was “more like a solemn funeral than a great victory,” wrote one reader of the Argus in Melbourne. No victory would feel complete until the surrender of the the final axis power, but the first VE Day in 1945 still provided a sense of hope to the Australian public that end of the war was perhaps not so far away. 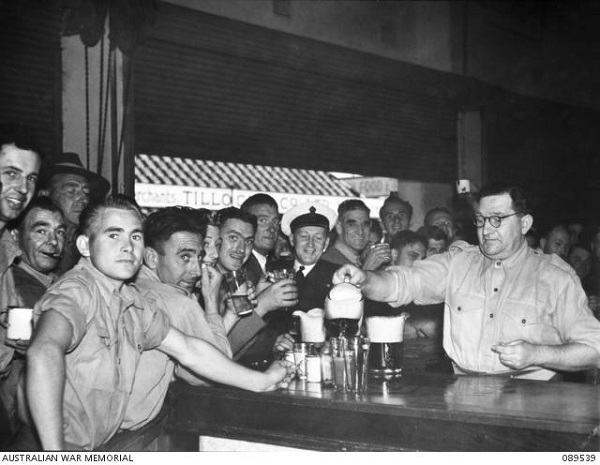