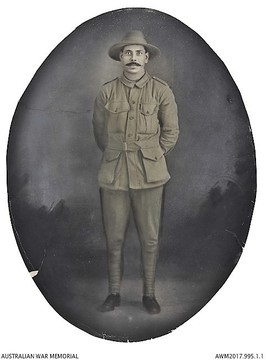 The 33rd Battalion was raised in northern NSW at Armidale and its men were intially drawn from that region.  It was to be the first of four Battalions forming the 9th Brigade, all largely drawn from men who enlisted in NSW.  Its lineage is signified by its Colour patch;  the eliptical shape denotes the Third Division, the green lower half the first brigade of the division (the 9th) and the black upper half the first battalion of that brigade.

The 33rd Battalion was notable in that it had just one commanding officer throughout the war, Lieutenant Colonel Leslie Moorshead, who, having started the war as a private in the 2nd battalion left Gallipoli as a Major and was to go on to lead the 33rd Battalion with distinction and then to senior command in the Second World War commanding the 9th Division in the Western Desert campaign, and most famously, 'The Rats of Tobruk' during the epic siege.

However, in the meantime the 33rd Battalion had to be trained for war, along with the rest of the Division. They concentrated and trained at Larkhill, on the Salisbury Plain west of London.  Its Commander was newly promoted Brigadier John Monash, who despite an indifferent record as Commander 4th Brigade on Gallipoli was set to make a mark on the AIF.  Intensive training and thorough preparation and staff work marked the 3rd Division.  It began deploying to France in November 1916, doing as its predecessors had done in undertaking 'conditioning' to the trench warfare environment around Armentieres in Flanders.  The 33rd relieved a British  battalion in the font line.

His Division Commander, Major General John Monash remarked of Moorshead "This officer has displayed conspicuous ability in administration and organisation of his battalion, which has attained a high standard of fighting efficiency. His energetic attention to the training of his officers and men prior to embarkation was responsible for the smoothness and despatch with which his battalion relieved a British battalion in the line a few days after arriving at the front. Since the battalion has taken its place in the line it has proved itself to be an efficient fighting unit due to this officer's personality and marked capacity for command. He organised and controlled two raids on the enemy's trenches and carried them out successfully. His courage and strong personality has created an excellent spirit in all ranks of the battalion. This officer previously served at Gallipoli.

A far bigger test was to come.

The 3rd Division was tasked to take a key part in a massive attack as part of General Sir Herbert Plumer’s British 2nd Army.  It was to be a test of Plumer's 'bite and hold tactis in an endeavour to prevent Allied forces over-reaching themselves and tthen becoming vulnerable to counter attack which had so typiified proceeedings previoulsly.

Together with the New Zealand Division on the left with the town of Messines as its key objective, the 3rd was to clear the southern end of the ridge with the 4th Australian Division in depth to support and push through the two forward Divisions.  The attack was supported by the biggest mining effort of the war and at H Hour, Engineers literally blew the top off the ridge with 19 massive mines.  The sound could allegedly be heard in London. It was a resounding success and only the second Allied victory of any note on the Western Front following the Canadian success at Vimy Ridge in April.

The 3rd Division joined the rest of the AIF, albeit split under two separate British commands and was committed to the Third Ypres campaign.  This was an offensive aimed at clearing the high ground surrounding the city of Ypres (Ieper)  to deny the enemy observation and the capacity to direct artillery fire on the town.  It began well.  The 3rd Division was committed to fighting at Menin Road in late September 1917 and at Broodseinde Ridge on 4th October, both of which were resounding successes complemented by Polygon Wood, involving primarily the 4th and 5th Divisions on 24/5 September.

The Battalion and the rest of the 3rd Division provided support to the Battle of Poelcapelle on 9th October, which was really a preliminary operation to capture the Passchendaele ridge.  The 3rd Division‘s turn came with its involvement in the misery of the 1st Battle for Passchendaele from 12th October.

However the momentum could not be maintained with the weather playing a major par, and Third Ypres petered out in mud rain and misery giving over to another freezing winter although notably the Canadian Corps eventually captured Passchendaele but at tremendous cost.

Another winter shut proceedings down until March 1918 with the 2nd Division remaining in Flanders.

Then in late March the Somme front erupted as the Germans unleashed their make or break Spring Offensive , intended to dislocate the French British front and cut Paris off from the Channel Ports to give the Germans the best possible position from which to sue for peace on their terms before the arrival of US forces in large numbers.  The AIF was despatched piecemeal by the British High Command to block gaps in the crumbling British 5th Army front.

The 3rd Division spent most of this period under command of the British 3rd Army, on a terrain feature between the Ancre and Somme Rivers across an arc from Morlancourt to the vicinity of Villers Bretonneux.  It relieved the 4th Division after the latter’s heroic defence of the area north of Dernancourt preventing a German breakthrough from 28 March – 5th April,  to the Amiens Albert road. Its focal point was Sailly le Sec

Moorshead and numbers of his troops were gassed on 18 April while billetted in Villers Bretonneux, resulting in him and many of his soldiers being evacuated for treatment.  He did not rejoing the Battalion until June.

In May the Australian Corps was at last formed and General John Monash appointed as its commander, although not without a lot of opposition and thinly veiled anti-Semitism by people, including correspondents Bean and Packer trying to influence Australian PM Billy Hughes who himself was wavering.  They were proven wrong by subsequent events.

The Division and its Battalions were active in the period known as ‘Peaceful Penetration’, advancing the line by limited but coordinated attacks on German defensive outposts.

Le Hamel was the first test of the new Corps structure, but most importantly the Combined Arms  tactics that Monash had been advocating;  each Division had at least a token representation in the Order of Battle.  It was a set-piece demonstration of the application of Combined Arms theory and it worked perfectly.  The 9th Brigade sat this one out in a security position.

A month later and it was time for the main event as the Battalion took its place in the Australian for the Great Allied offensive, the "Last Hundred Days" campaign beginning on the 8th August 1918 with the Battle of Amiens.  British III Corps north of the Somme, then the Australian and Canadian Corps side by side south of the Somme coordinated with the French Army further south.

The 3rd Division started the Amiens offensive on the right hand flank, leading ‘two-up’ with the 2nd Division on the right (southern) side of the Corps front.    The 5th and 4th Divisions followed respectively with the 1st Division as Reserve.  Surprise, synchronised artillery that had achieved registration of targets using data from new sound-ranging techniques, and the shock action imparted by use of tanks on a scale hitherto not seen led to spectacular gains as Monash had forecast at Le Hamel and initial objectives were achieved within three hours, at twhich point the folowing Divisions pushed through.

The 3rd Division crossed the Somme on the approaches to Peronne and Mont St Quentin and was tasked to secure the Australian Corp’s northern flank, which was exposed as the British III Corps axis of advance was drawn towards Bapaume.  The 33rd was engaged throughout this phase clearing and reducing German defences and strongpoints.

This enabled the 2nd and 5th Divisions to execute their set piece attack on the Mont from 30 August – 2nd September without it must be noted any armoured support and precious little artillery.  The 5th Division cleared the town of Peronne after a risky river crossing of the Somme, and one of the AIF’s most spectacular successes was achieved completely dislocating that section of the German line.

The advance continued and in late September / early October the Australian Corps found itself drawn up facing the Hindenburg Line along the line of the Cambrai St Quentin Canal.

Two American Divisions, the 27th and 30th, were to lead the assault ‘two Divisions up’ over the hill through which the canal ran at Riqueval, with the British 60th Division assaulting across the canal to the south.  The American Divisions had number of Australian officers and NCO as Advisers with the lead elements.  These men would distinguish themselves in the attack, six being awarded Distinguished Service Crosses.

The 3rd and 5th Divisions were to follow them up.  As it turned out the inexperienced Americans, particularly the 27th Division faltered.  The 3rd Division was compelled to move through them earlier than planned to maintain the momentum of the attack.

After the 2nd Division attack on the Beaurevoir Line at Montbrehain on the 5th October, the AIF was withdrawn from the line to reinforce and refit following the accumulated losses it had sustained since 8th August.  The 33rd Battalion’s war was over, not quite two years after it arrived at the Front.

White, Harold Fletcher (2IC who relieved Moorshead when he was evacuated gassed in May 1918)